Zinke steps out on new stage 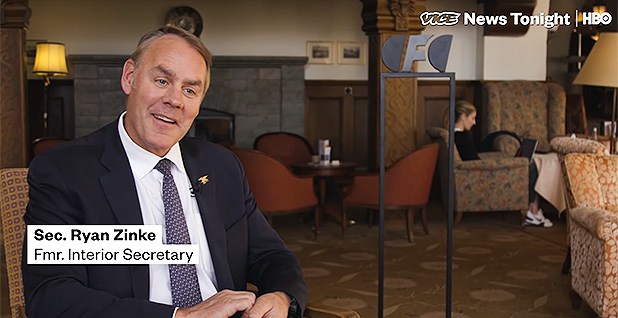 In an interview with Vice News broadcast last night, Zinke appeared relaxed and enthusiastic as he briefly discussed his work as Artillery One’s managing director.

Blockchain refers to systems in which blocks of digital information can be securely stored and distributed; it’s associated with cryptocurrency.

Last week, Zinke and Artillery One founder Daniel Cannon were in Switzerland to attend the three-day Crypto Finance Conference held at the Suvretta House hotel, where suites can range upward of $1,000 a night or more.

The conference that began Jan. 16 billed itself as one that "brings together both private and institutional investors as well as the leading crypto & blockchain players and is exclusively tailored around investors needs and offers excellent expert education, investment and unique networking opportunities."

In March, Artillery One is sponsoring its own four-day Blockchain Innovators Summit at The Breakers Palm Beach resort in Florida.

Cannon announced the hiring of Zinke on Jan. 14, declaring in a statement that Zinke’s expertise "will help Artillery One to continue to expand its consulting and finance business in the core areas of cybersecurity, energy, fintech and digital assets." Fintech refers to financial technology (Greenwire, Jan. 15).

Cannon attended Virginia Commonwealth University and the University of Maryland and has worked for several investment-related firms, according to his LinkedIn profile. He formed the North Carolina-based Artillery One in October 2017 to "pursue investing and development opportunities globally in energy, fintech and cybersecurity," according to the company.

"We met years ago on an airplane," Zinke explained in his Vice News interview. "After I left the secretary [job], I got a phone call out of the blue, and we began to talk."

Zinke added that "we have a similar vision."

The former Montana congressman and Cabinet secretary then rolled up his slacks to reveal he was wearing "Make America Great Again" socks, which he can now do without violating the Hatch Act constraint on campaign activities by public officials.