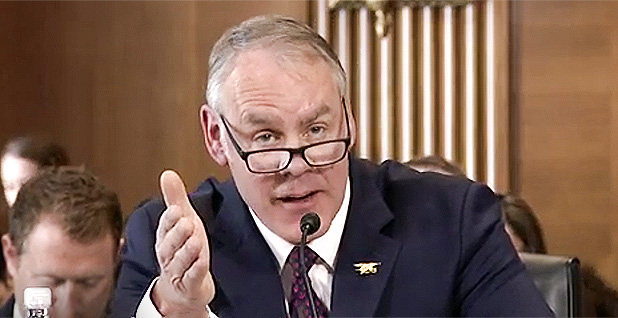 Ryan Zinke today angrily defended his travel as Interior secretary before a Senate committee, telling the panel’s top Democrat that he resented her "insults."

Sen. Maria Cantwell (D-Wash.) asked Zinke during an Energy and Natural Resources Committee hearing on the fiscal 2019 budget whether he thought it was "a mistake" to take "a private jet home from Las Vegas."

Cantwell was referring to reports, which the department’s inspector general is now investigating, that Zinke chartered a $12,000 flight last fall from Nevada to Montana near his hometown.

The trip is among several Zinke has made as secretary that federal investigators are reviewing. He also spent about $14,000 on helicopters last summer.

Of last fall’s Nevada-Montana trip in particular, Interior has said it was approved by the ethics office and that a commercial flight was not available to ferry Zinke between the two events.

"The insults and innuendoes are misleading," Zinke said to Cantwell. "I never took a private jet anywhere." He then defended his travel, as well as the travel of his predecessor, Sally Jewell, who was out "doing what she was supposed to be doing."

Zinke said he took three trips, one of them with Senate Energy and Natural Resources Chairwoman Lisa Murkowski (R-Alaska) on a "prop plane" to tour parts of the Last Frontier. Zinke said Cantwell’s characterization that the travel with Murkowski occurred on a "private jet" was "inappropriate, ma’am."

Cantwell’s questioning came amid other recent reports of questionable spending at the agency, including a $139,000 contract to replace doors in the secretarial suite.

Zinke has said he was not aware of the contract, which is part of an overall modernization project at department headquarters. But his office has defended it as a "reasonable" cost, pointing to historic building requirements and revealing that existing doors had been mended with "cardboard and duct tape" (Greenwire, March 9).

The ranking Democrat said questions about the agency’s spending on trips and building upgrades were relevant in light of the department’s proposals to raise fees at national parks. She said she wants to see more transparency from the agency.

"I simply asked you a question about the private jet trip to Vegas. We’ll ask you in writing, and maybe we will get an answer. The IG is looking at this issue, and we are looking at the larger issue of how time and money is spent," Cantwell said.

The testy exchange, which occurred toward the beginning of the hearing, foreshadowed subsequent interactions with other Democrats over various issues, including the department’s five-year proposal to open up more than 90 percent of federal waters to oil and gas drilling, as well as the budget proposal’s recommendation to slash the popular Land and Water Conservation Fund.

Sen. Ron Wyden (D-Ore.) criticized what he called the "virtual elimination" of LWCF in the administration’s budget request. He also said he regretted supporting Zinke’s nomination as Interior secretary.

"As of today, it was one of the biggest regrets of my time in public service," Wyden said.

Zinke defended the administration’s budget, saying that while the department will continue to emphasize energy development, the priorities this year revolve around "conservation, infrastructure and reorganization."

The proposal would reduce land acquisition funding to $8 million — from the current spending level of $400 million and the fiscal 2018 request of $154 million — and "would instead focus available discretionary funds on investing in and maintaining existing national parks, refuges and public lands."

The budget blueprint, like the administration’s infrastructure plan, proposes a "public lands infrastructure fund" that would provide up to $18 billion over a decade, which Zinke today called "a legislative priority."

The money would be "derived from 50 percent of incremental energy leasing receipts over 2018 budget projections," according to the budget plan. The proposal also highlights Interior’s role in streamlining the environmental permitting process, which the White House wants to cut back to two years.

Zinke has proposed dividing the department’s various bureaus into 13 geographic regions across the country based on watershed and other natural resource boundary lines. The change is intended to improve agency collaboration and efficiency by shifting more authority from Washington to communities out West, where the government owns huge swaths of land.

As part of those management reforms, the department "is continuing to evaluate the advantages and disadvantages of [the Bureau of Ocean Energy Management] and [the Bureau of Safety and Environmental Enforcement] being separate organizations, with the understanding that revenue collection activities need to be separate from safety," Zinke said during the hearing.

The Interior secretary said the reorganization plan revolves around improving permitting and access to recreation. He said the department hasn’t yet determined which areas out West could end up as new hubs, but that it will identify three locations in Western regions where "entry-level" Interior employees can enjoy a "good quality of life."

Zinke received a much warmer reception from Republicans.

"While I do not agree with everything in this request, I think it’s fair to say it is a lot better than what we have seen in many recent years, and I thank you for that," said Murkowski. "It focuses on taking care of the lands the federal government already owns, rather than continuing to buy more."

Zinke told lawmakers that he put "everything on" the table related to potential offshore drilling "so we can have a dialogue" and take certain places off "as appropriate."

The secretary has taken a lot of heat for tweeting earlier this year that Florida is "off the table" when it comes to future oil and gas drilling in the areas where a current moratorium is in effect. But he reiterated today that everything is still part of the equation right now.

Still, Zinke said he knew "where every state stood" on the proposal, and that opposition — as well as the potential for oil and gas — in certain places will be taken into account in the final analysis.

He said the next phase of the plan will be unveiled probably in "late fall."