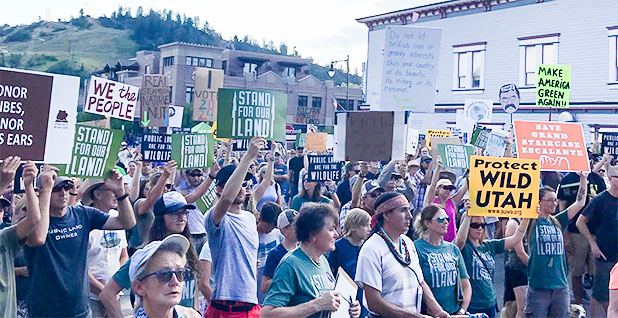 Hundreds of protestors gathered over the weekend in Steamboat Springs, Colo., where Interior Secretary Ryan Zinke was speaking to the Steamboat Institute. @Wilderness/Twitter

Interior Secretary Ryan Zinke lashed out at a protester Friday who interrupted his remarks on energy dominance at a conservative nonprofit conference in Steamboat Springs, Colo.

"You know what? You haven’t served, and you don’t know what energy is," Zinke told a local protester who challenged him on climate change at the start of his speech. "I’d like to see your child have to fight for energy," he added, to applause.

Zinke served as a Navy SEAL between 1986 and 2008, when he retired from the Navy and was elected to the Montana Senate.

HuffPost identified the protester as Sallie Holmes. She interrupted Zinke’s speech during the Steamboat Institute’s Freedom Conference, asking Zinke why he wouldn’t "acknowledge that climate change is causing and accelerating wildfires," according to the report.

The Steamboat Pilot & Today newspaper posted a video on Facebook of Zinke’s hourlong remarks, including a question-and-answer session with the group.

"The Secretary has been very clear that his service as a Navy SEAL has shaped his outlook on energy development in foreign countries," said Interior spokeswoman Faith Vander Voort in an email today. "We should not be engaged in military conflict overseas when we can develop energy here at home in a more efficient and environmentally friendly way."

Some shouts from the audience could be heard as Zinke began his speech. "Debate is important. All sides need to be heard, but it’s never nice to be rude," the secretary said, a few minutes before directly addressing Holmes.

Holmes was not the only protester in Colorado for Zinke’s visit. About 1,400 protesters gathered outside the Routt County courthouse Friday for the "Stand For Our Land" rally to voice opposition to Zinke and his policies.

Zinke gave his typical stump speech at the conference, touting the importance of energy dominance to national security, his love of public lands and the need for reorganization at the Interior Department to improve management.

"I’m agnostic about where we get our energy," said Zinke, who said the department is pursuing wind and solar energy in addition to oil and gas. "I just want our energy made in the United States."

He said the Trump administration and his department are making a "grand pivot" from last year’s focus on energy development to improving infrastructure in national parks and on public land.

"No one loves public land more than I do," he said, adding that he doesn’t want to "sell it" or "transfer it."

During the question-and-answer session, the moderator asked Zinke about coming under fire for defending the administration’s policies.

"As a SEAL, I’ve been shot at before; I’m very comfortable with it," he said.

Zinke called Washington, D.C., a "tough" and "angry" town that is "intolerant" to different viewpoints. "They don’t want to expand their paradigm and look at the actual facts."