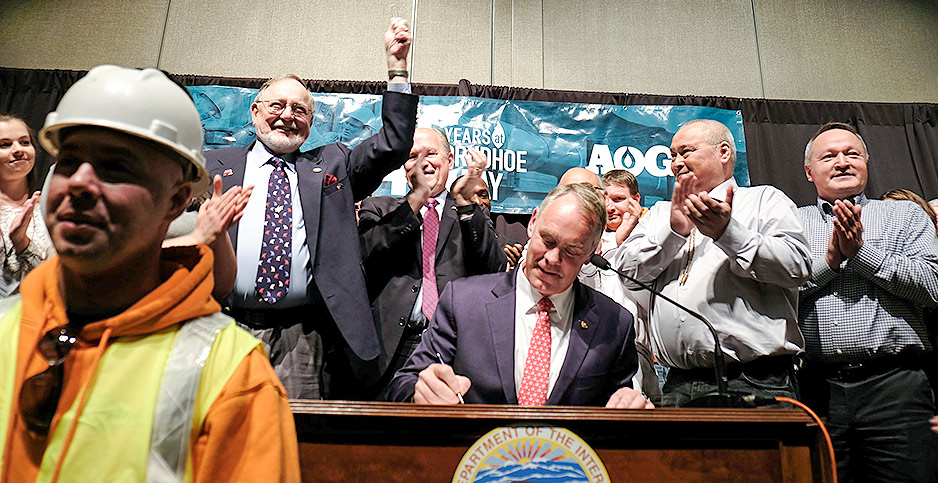 Interior Secretary Ryan Zinke wants to drill more oil to help pay for projects that guard against sea-level rise. Department of the Interior/Flickr

A pair of ducks floated over a submerged sidewalk on a sunny day in East Potomac Park recently.

The water isn’t supposed to be there. But the 124-year-old cement sea wall encircling the park is crumbling. A nearby sea wall located just 4 miles from the Interior Department’s headquarters in Washington is at the top of a long list of backlogged maintenance projects amounting to more than $11 billion.

To make those fixes, the department’s new secretary, Ryan Zinke, has called for additional offshore oil drilling to raise money for projects that are sometimes meant to prevent damage associated with climate change.

One example is the besieged sea wall along the Potomac River. It was built when water levels were 3 ½ feet lower. With an estimated price tag of $341.8 million, it’s just one of hundreds of projects — like bridges, roads and visitor centers — that need work across the National Park Service’s holdings.

Maintenance needs have ballooned in recent years. A combination of inadequate funding from Congress and aging assets are accelerating infrastructure decay. Record-breaking attendance across the nation’s parks is magnifying the problem.

Fixing the backlog is a top priority for Zinke. But one of his solutions — boosting offshore oil and gas development and putting those dollars to use fixing park infrastructure — is raising eyebrows.

Advocates say a lack of revenues is not the problem. Rather, Congress needs to settle on a legislative fix to deal with the backlog issue. Increasing fossil fuel extraction, which boosts greenhouse gas emissions and accelerates climate change, is a poor way to fund investments in adaptation infrastructure and other projects, they say. That’s especially true since our national treasures are already being affected by the growing impacts of global warming, they add.

"Drilling in sensitive areas that could affect National Park resources and ecosystems would be damaging and is not a necessary revenue source for dealing with the Park Service backlog or other public lands infrastructure," said John Garder, director of budget and appropriations for the National Parks Conservation Association. "There are sufficient amounts coming from current drilling to provide for a backlog fund and many other needs."

Oil and gas companies pay the federal government for the right to lease waters on the outer continental shelf. They also pay royalties on the oil and gas produced from those parcels. In total, gross income from offshore oil and gas resources averaged $8 billion per year between 2005 and 2014.

Income collected from offshore drilling goes into the general treasury, and it can vary year to year. In 2008, income from bonus bids spiked to almost $10 billion, much higher than the 2005-2014 average of $1.8 billion.

Zinke has outlined his version of the problem dozens of times since being confirmed: There’s not enough money because of, in part, decreased drilling.

"If you go back to 2008, the department made $15.5 billion more a year just in offshore than what we make today," Zinke said in April.

"When you look at the parks, our revenue picture isn’t good," he added. "If we lost $15.5 billion, that was enough money for infrastructure."

One of his first acts as secretary was to begin a major review of the agency’s revenue streams.

Weeks after moving into his sixth-floor office, he stood beside the president as Trump canceled Interior’s moratorium on federal coal leasing. In April, Trump signed an executive order directing Interior to identify areas of the outer continental shelf that could be opened for drilling. During a recent trip to Alaska, Zinke signed a secretarial order designed to kick-start oil drilling on federal lands in Alaska.

Even if the new administration makes good on its promises to boost fossil fuel development on public lands, the onus would be on Congress to make changes to how the money is spent.

"How to use those collected funds is a decision that lies clearly in the wheelhouse of the administration and Congress, and the industry leaves that decision to the federal government," said Randall Luthi, president of the National Ocean Industries Association.

Appropriations experts said it would be a heavy lift in Congress to redirect oil and gas revenues from the Treasury to NPS.

Mark Harkins, a senior fellow at Georgetown University’s Government Affairs Institute, said lawmakers would have to offer some way to replace the missing revenue. That could include offering a tax break or redirecting mandatory spending from other areas.

Congress could waive the "pay-as-you-go" budget rule, suggested Harkins, who spent 17 years on the Hill. But that might mean Republicans would be put in the challenging position of supporting a measure that adds to the federal deficit.

"It sounds like such an easy thing, and it’s easy for someone in the administration to say, ‘Let’s just dedicate the funding,’ but they don’t have to take the votes," Harkins said. "It’s ironic that former Representative Zinke is pushing this when he knows good and well how hard this would be."

There is a bipartisan solution in Congress. And it’s supported by conservation groups.

The "National Park Service Legacy Act," introduced by Sen. Mark Warner (D-Va.) and Rep. Derek Kilmer (D-Wash.), would direct $50 million to the Treasury from oil and gas companies that drill on the outer continental shelf. That money would go into a separate fund for the NPS backlog (E&E Daily, May 23).

The money would increase through 2047, topping out at $500 million a year. The initial co-sponsors of the bill are Sen. Rob Portman (R-Ohio) and Reps. Will Hurd (R-Texas), Colleen Hanabusa (D-Hawaii) and Dave Reichert (R-Wash.).

"When you’re taking on a project like Grand Canyon water pipeline system, which is a $150 million fix, there is definitely a lot of planning and design that goes into that," she said. "The more the Park Service can plan ahead of time, the better."

When asked at a recent House budget hearing by Kilmer if the agency would support the bill, Zinke was noncommittal. But he expressed support for the idea generally.

The Land and Water Conservation Fund has a similar revenue source.

"Life’s a lot happier when we have money, so we are looking at direct revenue to address our infrastructure," Zinke said. "Offshore funds the LWCF. … Wouldn’t it be nice if you could direct some of that into direct infrastructure?"

‘We patch that up’

On the ground, the lack of funding for park maintenance is acutely felt by park managers and their guests. Those impacts stand to be amplified as temperatures rise and sea levels climb, experts say.

Along the tidal basin in Washington, three sea walls need to be repaired. According to NPS data from fiscal 2015, they are among the 20 most expensive projects listed on the backlog.

The East Potomac Park sea wall was constructed on reclaimed land. It’s settling — and sinking. The Potomac River is also rising about 1 inch every eight years, according to U.S. EPA. By the end of the century, the sea level in the District is expected to rise between 16 inches and 4 feet, making the park nearly impossible to visit.

There has been frequent flooding. Hains Point, a recreation mecca for Washington residents and tourists, is often closed. Whole sections of sidewalk around the tidal basin often flood and must be closed, forcing tourists to create their own dirt paths inland. The rerouted traffic often tramples the grass around the iconic cherry trees.

Park officials say they have adapted and are doing the best they can.

"For us, it means doing an awful lot of patch work," said Mike Litterst, a public affairs officer with NPS who represents the National Mall and Memorial Parks. "The water creates a hole, we patch that up."