Zinke was briefed by USGS chief before downplaying climate 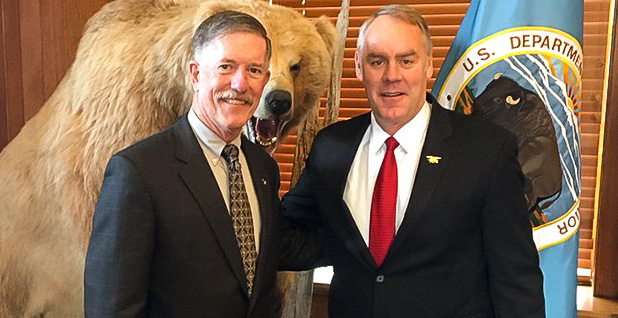 The U.S. Geological Survey director huddled with Ryan Zinke hours before the then-Interior secretary went on television to downplay the National Climate Assessment.

USGS Director James Reilly and Zinke scheduled a pair of meetings a few days after the National Climate Assessment’s release. The report drew a rare amount of public attention to climate change, and the administration faced sharp questions about loosening pollution rules in the face of its own scientists’ warnings.

It’s not clear what Reilly told Zinke, or who else was in the room. There are no briefing materials or other records from the meeting, according to USGS, and an agency spokeswoman declined to comment on what transpired.

What’s clear is how Zinke used the meeting to strengthen his dismissal of a scientific report.

"I sat down with our top scientists today, and this is what it says," Zinke said during a November 2018 interview on Fox News.

The report, produced in part by federal scientists from USGS and other Interior Department agencies, said the world’s emissions match the worst-case scenario, and the globe needs to take "immediate and substantial" action to avoid the "most severe consequences."

Zinke instead framed the worst-case scenario as a remote possibility.

"What we’re seeing is a full spread of models. There’s 200 models, 1,000 variables. So if you look at what the evidence says, we’re a lot closer to the low end," he said.

Zinke’s remarks echoed an initiative of Reilly’s to restrict the way government scientists use climate models.

Reilly is preparing to direct his agency’s scientists to use only models ranging to 2040, when the climate impacts of emissions will be minor compared to 2100, the typical range of modelling. Reilly is a former astronaut with no climate science background.

Reilly’s directive, first reported by The New York Times, has been in the works for several months, a source familiar with the effort told E&E News.

On the day of the Fox News interview, Reilly’s schedule showed a 45-minute meeting in Zinke’s office and another 15-minute briefing later in the day, according to documents obtained through a Freedom of Information Act request.

Two days before his meeting with Reilly, Zinke claimed in a television interview that USGS scientists had expressed "concern" over the climate assessment (Climatewire, Nov. 28, 2018).

USGS has experienced unusual political turbulence under the Trump administration for an agency that historically keeps a low profile.

Two high-level scientists have left in protest of political officials reviewing their work before publication. USGS scientists must now seek permission with Interior’s communications office before speaking with reporters, according to the Los Angeles Times.

Interior also required USGS scientists to submit detailed justification before traveling to conferences, including a statement of how their research advanced Zinke’s priorities, according to The Washington Post.

Reilly emphasized scientific integrity during his confirmation hearing, and scientists need that kind of support to continue doing contentious research, said Michael Halpern, deputy director of the Union of Concerned Scientists’ Center for Science and Democracy.

"Disruptive ambiguity is harmful to scientists’ willingness to put forth contentious research results, and so a very clear signal from Dr. Reilly would be welcome to a lot of the scientists who have been at USGS for decades and have not experienced this level of political scrutiny of their work," Halpern said.