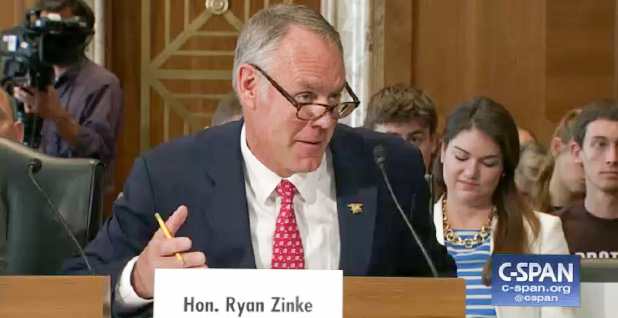 Interior Secretary Ryan Zinke evaded questions yesterday about the extent of rising temperatures during a Senate budget hearing for an agency that oversees fossil fuel development on a fifth of the nation’s land.

During a heated exchange with Sen. Al Franken (D-Minn.), Zinke punted on basic questions about climate science. The secretary declined to engage in a line of inquiry that focused on government predictions of rising temperatures over the next 80 years. He claimed instead that climate models are inaccurate, a frequent talking point among climate skeptics.

"I’m concerned about whether you are clear about the magnitude of warming that is occurring," Franken said at the Energy and Natural Resources Committee hearing.

Franken repeatedly asked Zinke, a former congressman from Montana, if he could "tell me how much warming government scientists predict for the end of this century under a business-as-usual scenario?"

"I don’t think government scientists can predict with certainty," he said. "There isn’t a model that exists today that can predict today’s weather given all the data."

Over the last few decades, scientists have come to use more than 30 climate models to project how climate could change in the future. The models often combine decades of weather, physics and the forcing effects of large-scale climate drivers, such as the amount of greenhouse gases in the atmosphere, in order to predict future climate.

The Earth is expected to warm between 8 and 11 degrees Fahrenheit by 2100 if emissions continue to rise unfettered, according to the 2014 National Climate Assessment.

Kevin Trenberth, a senior scientist at the National Center for Atmospheric Research in Colorado, said Zinke’s explanation was "a stupid and ignorant answer."

Climate models, he said, are getting better. The simulations increasingly line up with observed changes. By using temperature records and atmospheric measurements of carbon dioxide, scientists know that in the past 200 years the planet has warmed about 1.4 F and CO2 has risen 40 percent. The present level of atmospheric CO2 is higher than it has been in the past million years.

"Well, all models are wrong, but some are useful," Trenberth said. "Weather models aren’t able to accurately predict if it’ll be sunny or rainy two weeks from now because they are sensitive to small disruptions.

"But the patterns of weather may still be predictable in the same sense that summer is different than winter," he added. "And that is what climate is all about: determining the effects of the sun, the atmospheric composition, the oceans, the ice and … looking for systematic influences."

While climate modeling and weather forecasting are similar, they rely on different sets of data and measure vastly different time scales, said Gavin Schmidt, director of the NASA Goddard Institute for Space Studies.

"Weather forecasting is based on our ability to track weather systems (fronts, storms, wave patterns etc.) and is excellent at the 1 to 5 day range," he said in an email. "Climate forecasts by contrast predict statistics of weather as opposed to specific events."

When looking over long periods of time, the external drivers of climate — things like how much carbon dioxide is in the atmosphere trapping heat, and how many trees have been cut down and are no longer sequestering greenhouse gases — can be used to make statistical predictions about the climate, Schmidt said.

In a statement to E&E News, Franken said he wanted Zinke to recognize the real threat of climate change and the role his agency plays in setting policy that can affect it.

"I wanted Secretary Zinke to acknowledge that climate change is real, that without action the increase in temperatures will be large, that he listens to the climate scientists in his agency, and that he grasps that climate change will affect our public lands," Franken said. "I find it troubling, to say the least, that he failed to address any of those very important issues."

During the hearing, Zinke also seized on the Trump administration’s decision to pull out of the Paris Agreement. He characterized the move as not being about climate change, but about the agreement’s being a "bad deal." President Trump has repeatedly used the same language.

He then cited a White House talking point that if the agreement were implemented, it would only produce a 0.2-degree-Celsius reduction in global temperatures. Zinke called that "insignificant."

Zinke said his data point came from a report by the Massachusetts Institute of Technology. But researchers from the Climate Interactive project, which collaborates with MIT, have refuted that point.

In fact, the study shows that the Paris Agreement could lower the expected temperature increase by 0.6 to 1.1 C (Climatewire, June 2).

An exasperated Franken again pressed the Cabinet secretary to answer his question about the science.

"I just want you to answer the question that I asked you. That’s all I want you to do," Franken said. "Can you tell me how much warming government scientists … predict for the end of the century under a business-as-usual scenario?"

"Can you tell me, sir, whether or not China increased its CO2 between now and 2030 under the agreement, and by what?" Zinke asked. "I will be glad to give you that answer."

The two agreed to finish the discussion in written comments submitted for the record.