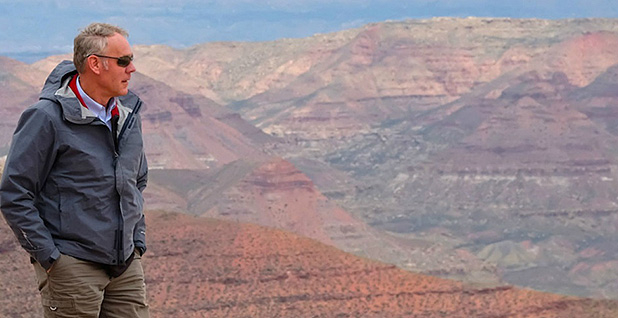 This photo of Interior Secretary Ryan Zinke ran alongside a press release about Bears Ears National Monument, but an online photo album suggests it was taken at Grand Staircase-Escalante National Monument. Department of the Interior

Utah is home to more than 34 million acres of federal lands, including various national parks and monuments — so maybe it’s no wonder everyone seems to mix them up when it comes time to post a photograph of Bears Ears National Monument.

The Interior Department topped its Monday announcement that Secretary Ryan Zinke will recommend significant reductions to the 1.35-million-acre Bears Ears monument with a striking photo of the former Montana lawmaker looking over a vista of rocky, red hills.

But according to Interior’s public account on photo sharing site Flickr, the image actually belongs to a collection of photos from Zinke’s recent visit to Grand Staircase-Escalante National Monument.

The discrepancy was first reported by NPR’s Utah station KUER.

The Interior Department did not immediately return a request for comment. Zinke is in the midst of a tour of New England states and is scheduled to visit the Katahdin Woods and Waters National Monument today.

The photographic mix-up is only the latest in a string of errors identifying the Bears Ears monument.

President Obama took flak in December when his administration tweeted out a photo of Arches National Park when he designated Bears Ears (Greenwire, Jan. 24).

"Classic. @WhiteHouse pic is Arches not monuments. Couldn’t find a pic of Bears Ears & doesn’t even know where it is. #WorstPresidentEver," Chaffetz wrote in late December.

Similarly, in a video at the time, Lee compared Obama’s error to President Clinton’s decision to designate the Grand Staircase monument at a ceremony in Arizona.

E&E News has likewise made errors in identifying national monuments in Utah. In early May, this publication used a photo of Bears Ears instead of an image of the Grand Staircase-Escalante monument.