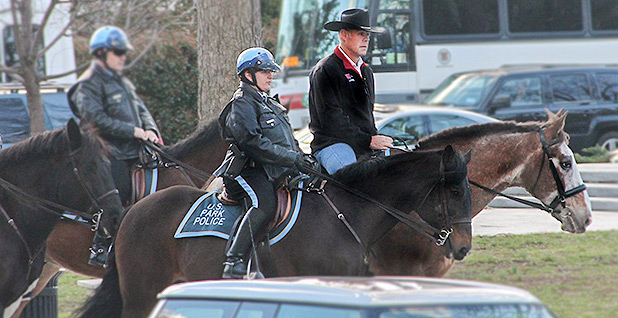 Flanked by the U.S. Park Police, Interior Secretary Ryan Zinke rides to his first day at work on a horse named Tonto. Bureau of Safety and Environmental Enforcement/Twitter

Speaking before oil executives about a week ago, Interior Secretary Ryan Zinke said people often ask him what was easier: being a Navy SEAL or a Cabinet secretary.

"I always say, ‘Actually SEAL was easier. As a SEAL, people shot at you, I could shoot back,’" he said.

Over the weekend, Zinke surrendered.

"[A]fter 30 years of public service, I cannot justify spending thousands of dollars defending myself and my family against false allegations," he tweeted Saturday morning after President Trump announced his departure, also on Twitter.

Zinke’s two-year post in the Trump Cabinet has been plagued by multiple accusations that he misspent taxpayer dollars and violated government ethic rules — all of which he denied.

The 57-year-old Montanan’s brain was not one for contemplating bureaucratic policies, sources said. After all, he spent 23 years as a Navy SEAL and never seemed to quite fit in the Beltway. Two weeks ago, at the National Petroleum Council, Zinke told oil executives to have a merry Christmas and not to spend too much time in Washington.

In recent years, Zinke has become known for espousing Trump’s "energy dominance" agenda, but oil experts note the country’s current high production levels do not have much to do with the Trump administration — and actually have a lot to do with what happened in the Obama era.

Zinke does not agree.

"My concern is we need to be better to be emphasizing the case for American energy," he told the oil executives two weeks ago.

Zinke frequently touted on Fox News and Twitter that American oil production has boomed in the past two years as the administration pushed for "energy dominance," a term believed to be coined by Trump himself. Zinke said production could in the next two years reach as much as 14 million barrels of oil a day, a nearly 3 million increase from current record levels (Energywire, Sept. 18).

But economists note the current oil production boom has little to do with the Trump administration.

Laura Zachary, associate director of Apogee Economics and Policy, argued last month that most federal actions "have had marginal, if any, impact compared to larger market forces" as well as advances in technology. For oil, she said, price alone explains between 85 and 97 percent of the change in U.S. crude production during Trump’s first year in office.

Overall, oil companies have not been all that interested in the federal land that the Trump administration has to offer. Less than 14 percent of all onshore acres on the auction block between January 2017 and September 2018 have actually sold, according to Zachary. Prime examples are Alaska and Nevada, where the combined millions of acres offered attracted very little interest from oil companies.

At the time, Interior Department officials in Alaska justified the disappointment by saying the best lands weren’t offered (Energywire, Dec. 13).

"The Trump administration has increased federal energy revenues by over a billion dollars each year we’ve been in office," she said. "We have had two record-breaking energy leases in the span of three months: one onshore oil and gas, one offshore wind."

But New Mexico and the booming Permian Basin, which oil producers have lucratively unlocked, appears to be an outlier. And that very well could have happened under any other administration, Zachary noted.

Much of the federal land currently producing oil was likely leased during the Obama administration — but exactly how much is difficult to determine because drilling applications are dispersed at regional offices throughout the country.

And more broadly, the key reason the U.S. has become a net oil and gas exporter is because Congress lifted the ban on exports during the Obama administration.

Last month in Houston, former President Obama told the crowd it should give him credit for the United States’ increased energy output. "That was me, people," he said (Energywire, Nov. 28).

Still, Obama did not seek to make drilling on federal lands any easier, explained Kathleen Sgamma of the Western Energy Alliance.

"There are a thousand ways for the government to slow things down," she said.

Yet Sgamma added that the laws require any administration to advance "responsible oil and gas development. It’s one of the primary designated uses of our [non-park] public lands," she said. "That is constant across all administrations."

As for offshore drilling, Zinke grabbed headlines earlier this year when he proposed to open up more than 90 percent of the U.S. outer continental shelf (OCS). A majority of the offshore shelf is near Alaska, but government surveys show scant oil or gas reserves actually exist beneath much of the land there (Energywire, Jan. 17)

Walter Cruickshank, acting director at the Bureau of Ocean Energy Management, recently stressed that "the secretary wanted to know all that was out there" but that "he will winnow down." The next iteration of the five-year leasing plan is expected to be released any day now.

Conservationists worry about what the Trump administration’s push to open leases and roll back environmental rules means for the future.

His concerns were echoed in a flurry of advisories issued by environmental organizations over the weekend after the news broke.

"His slash-and-burn approach was absolutely destructive for public lands and wildlife," Friends of the Earth said in a statement.

Conservationists in Alaska amplified those ideas. "From the moment Secretary Zinke paraded in on horseback he’s presided over a reign of terror for our most cherished wild places," said Adam Kolton, executive director of the Alaska Wilderness League. He noted "rushed leasing and exploration in the Arctic National Wildlife Refuge" and "arbitrary and reckless" deadlines for review.

Not everyone expressed as much dismay.

Sen. Lisa Murkowski (R-Alaska), a longtime proponent of drilling in ANWR, called Zinke "a strong partner for Western states and for Alaska in particular."

"After years of frustration with the department, he came in and took a very different approach — he listened to us, built a great team and worked with us to advance our priorities," she said.

Similarly, Rep. Rob Bishop (R-Utah), outgoing chairman of the House Natural Resources Committee, said Zinke had a better vision for the future. "Where others dithered, he got stuff done. We owe him a debt of gratitude," he said in a statement.

Zinke’s Washington legacy appears to be a sharp contrast to the one he crafted as a state legislator and congressman in Montana, noted Jayson O’Neill of the Western Values Project. About 10 years ago, he drove a light-blue Prius and signed a letter urging Obama to fight climate change.

About two weeks ago, Zinke pushed back against the narrative surrounding the National Climate Assessment while acknowledging the hard work of the government scientists. Ultimately, he argued that the media has told the worst-case-scenario climate tale: "Statistically, we don’t know," he said, according to a video posted online.

Zinke’s departure has been expected for months. More broadly, getting out of Washington has been at the heart of Zinke’s mission. He had ambitious, if somewhat ambiguous, plans to reorganize Interior, pushing to send many of the departments and federal employees out West to be closer to the land they managed.

As for Zinke, he will be following his own advice in getting out of Washington — at least for now.