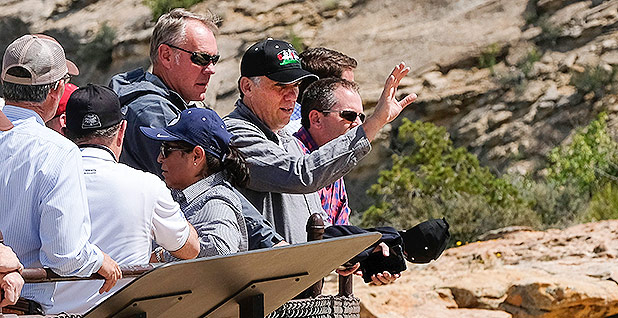 Interior Secretary Ryan Zinke is set to issue preliminary recommendations for the future of Bears Ears National Monument to the White House this week — but conservationists and Democrats are threatening legal action unless any changes are considered by Congress.

During a visit last month to Utah, where he toured both Bears Ears and Grand Staircase-Escalante National Monument, Zinke asserted that national monument status may not be the "right vehicle" to protect the 1.35-million-acre site designated by President Obama late last year.

"All of the above," Zinke said last month in response to which alternatives he expected to recommend to President Trump about Bears Ears. "The president has given me the flexibility to make a recommendation to him, and we have a lot of options" (Greenwire, May 10).

But Zinke ruled out seeking national park status for any of the lands — an option that would need to be pursued by Congress. That leaves him weighing a host of tricky recommendations, from other measures that would need to wind their way across Capitol Hill to contentious executive actions.

"Part of the conversation we had was me encouraging him that nobody questions Congress’ authority to act to protect the Bears Ears area, whereas, obviously, executive action to un-protect the area would be highly controversial," Ewing told E&E News.

But he added: "He wasn’t particularly open to the idea of congressional action being on his menu of items that he could recommend. But who knows what he might change."

Conservationists, as well as House Democrats including Arizona Rep. Raúl Grijalva, have warned that any effort by the Trump administration to revoke or reduce the monuments’ boundaries will face legal challenges (Greenwire, May 25).

"It’s virtually guaranteed that if executive action is taken, this will be tied up in the courts for many years and the land is the collateral damage," Ewing said.

To avoid a legal battle, Zinke could recommend that Congress pursue changes to the Bears Ears monument. But that would spur a political fight.

Utah lawmakers have already made a failed attempt to address the area via legislation known as the Utah Public Lands Initiative.

While a president may designate monuments only via the Antiquities Act of 1906, which allows the nation’s chief executive to protect federal lands with scientific, historic or cultural value, Congress claims exclusive power to manage public lands under the Constitution’s Property Clause.

Among its options, that means Congress can itself declare — or rescind — national monuments and parks, as well as create national conservation areas, wilderness areas and national recreation areas.

In designating such sites, Congress may set the boundaries, then exclude or include any activities, such as grazing or oil and gas development, as it deems necessary.

"When Congress enacts wilderness areas or national conservation areas, often it includes specific management provisions in its designations," explained former Interior Department Deputy Solicitor for Land Resources Justin Pidot, who is now an associate professor at the University of Denver Sturm College of Law. "It could be a wilderness area with uranium mining. If Congress did that, the designation is not worth a lot."

But given that congressional leeway, it can be difficult to compare how the lands included in the Bears Ears monument could fare under a different status.

"Without seeing the specifics of what a legislative vehicle looks like, it’s really hard to know how to compare a national monument designation to other designations," Pidot said. "One of the strengths of national monuments is we know how they work: They’re managed for multiple uses so long as those uses are consistent with the care and protection of the cultural historic resources that are present. It’s a well-trod path."

In the event Zinke does recommend that Congress pursue changes to the monument, observers both on and off the Hill pointed to House Natural Resources Chairman Rob Bishop’s (R) former Public Lands Initiative as a potential model.

Republican lawmakers last year failed to push that legislation through the House and did not see a version introduced in the Senate, following long negotiations with outside groups.

The boundaries of that proposal included roughly the same area: nearly 1.3 million acres, compared with the more than 1.35 million acres the Obama administration designated. The PLI would have created two new national conservation areas and a wilderness designation.

"The PLI leaves some very important areas that are protected by the monument unprotected; conversely, the PLI also protects some areas that the monument doesn’t protect," Ewing said.

Both plans included large swaths of Bureau of Land Management lands, including wilderness study areas as well as Forest Service land and Forest Service wilderness area. The PLI would have also included 115,000 acres managed by the National Park Service.

But he pointed to "loopholes" built into the legislation that opponents viewed as poison pills, arguing that "the wilderness that the PLI defined was not first-class wilderness."

Other points of contention over the legislation included allowances related to grazing, logging, mineral development and land transfers outside of those protected areas.

Ewing noted the re-establishment of grazing rights in sensitive portions of the Grand Gulch Primitive Area that are home to archaeological relics, as well as the transfer of public lands near Bluff, Utah, which he said would have allowed "massive industrialization right in our watershed."

"We support a legislative solution and still think that would be the best tack, but the national monument protection is the only practical solution in the short term," Ewing said. "Congress is not getting things done, and if you take away the national monument solution, it’s likely there will be another 100 years this area is not protected."

Natural Resources Committee spokeswoman Molly Block said, "Chairman Bishop remains committed to addressing these and other issues, and he views DOI’s review as an important step forward in doing so with transparency, accountability and local input."

The Utah lawmaker has also asserted, however, that the president could roll back the monument’s designation under the Antiquities Act, or alternatively slash its current size.

Conservative scholars at the Pacific Legal Foundation and American Enterprise Institute have suggested that the Trump administration has more options than simply seeking congressional assistance.

In an analysis published earlier this year, the organizations asserted that a president maintains a "general discretionary revocation power" under the Antiquities Act that would allow for the wholesale elimination or reduction of any monument (E&E News PM, March 29).

At his confirmation hearing in January, Zinke likewise expressed openness to the idea that the president can undo the designations of his predecessors, something no commander in chief has previously attempted.

"It will certainly be interesting to see whether the president has the authority to nullify a monument," Zinke said (E&E Daily, Jan. 18).

While past presidents have reduced the size of some monuments — President Kennedy was the last president to do so when he modified Bandelier National Monument in New Mexico — legal experts note that those decisions occurred before the enactment of the Federal Land Policy and Management Act of 1976 (FLPMA) and suggest such changes are no longer allowable.

But should Zinke opt to recommend that Trump undo the Bears Ears designation — and likely trigger a legal battle should the president act on that advice — the Interior Department would likely turn to administrative options for redesignating the 1.35-million-acre site.

That means "basically treating them as multiple-use lands," said Pidot, who emphasized that he was speaking hypothetically because he believes such a switch would be illegal given the monument’s existing designation under the Antiquities Act.

Under such an scenario, he added, "BLM and the Interior Department have broad authority under FLMPA to manage for whatever resources they think the lands are best suited for" and the Forest Service would likewise manage its lands under the National Forest Management Act.

During his visit to Utah last month, Zinke noted that several wilderness study areas already exist within the monument’s boundaries.

While wilderness areas must be designated by Congress, under FLPMA, BLM may recommend areas of 5,000 acres or more for preservation, informally preserving those areas until Congress takes action, potentially for decades.

Wilderness areas, which are also typically greater than 5,000 acres, are among the most restrictive options and are deemed to be areas where "man himself is a visitor who does not remain."

Other options via BLM include designating areas of environmental concern to prevent irreparable damage to important historic, cultural or scenic resources, as well as research natural areas to preserve natural ecosystems. BLM lands may also be designated as recreation areas to encourage both active use and protection of recreational resources.

But Groene added: "It’s hard to think about what realistically [Zinke] would propose that’s not just a ridiculous excuse to whack the monument."

Nearly 50 natural resources law scholars from institutions across the nation likewise warned Zinke in a letter earlier this month that attempting to act without Congress would invite "divisive litigation."

"A monument revocation designed to appease a narrow local economic interest or ideological opposition to the Antiquities Act is unlikely to survive judicial review," said the letter, written by Lewis & Clark Law School professor Michael Blumm and others.

Blumm told E&E News that while it’s legal for the Interior Department to study the monument and recommend changes, any action by Trump to alter the existing site would exceed his authority.

"It might be a useful enterprise to go look for some options at Bears Ears in terms of management and what status it might enjoy, but ultimately, it’s up to Congress," Blumm said.