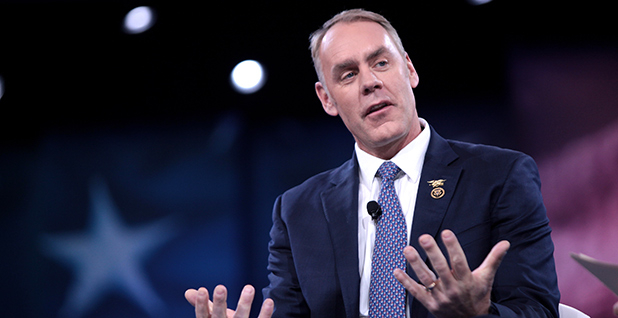 Opponents of Interior Secretary Ryan Zinke are taking another shot at him over alleged ethics violations. Gage Skidmore/Wikimedia Commons

Opponents of Interior Secretary Ryan Zinke are leaning on ethics complaints and requests for watchdog investigations, with the latest accusation targeting a political fundraising company’s use of praise Zinke once offered for the company’s work.

On its face, the undated quote did not, in fact, appear to run afoul of ethics rules. It did not identify Zinke as Interior secretary and did not state or suggest an executive agency endorsement. It has also been removed from the company’s website within the last 24 hours.

By publicly seeking an Office of Government Ethics investigation yesterday, though, the Campaign for Accountability underscored how ethics complaints have become both commonplace and weaponized.

"What we’ve learned this week is that Secretary Zinke thinks the rules don’t apply to him," Campaign for Accountability Executive Director Daniel Stevens said in an initial statement.

Tellingly, as part of what might be called the drumbeat effect, the Campaign for Accountability fit the latest complaint into what Stevens called in an interview today a "larger perspective" concerning Zinke’s behavior. When such narratives take hold, they can assume political momentum, color an official’s reputation and undercut the official’s power.

"Whether we’re in the majority or the minority, we have the same standing to get information," said Rep. Raúl Grijalva of Arizona, the senior Democrat on the House Natural Resources Committee. "I think we have to assert the fact that we have standing in this Congress."

In the majority, Grijalva acknowledged, Democrats would wield other powers to pierce what he called Zinke’s lack of transparency.

"We’d have subpoena power," Grijalva said, with a chuckle.

Last week, the Campaign for Accountability called on the Office of Special Counsel and Interior’s inspector general to investigate whether Zinke violated conflict-of-interest laws and the Hatch Act by speaking before a National Hockey League team in Las Vegas.

Urged on by House Democrats, the IG is already examining Zinke’s travels by chartered aircraft as well as his reassignments of dozens of Senior Executive Service employees (Greenwire, Sept. 11).

Democrats also sought an IG inquiry into Zinke’s alleged political pressure on Sen. Lisa Murkowski (R-Alaska) during the failed GOP effort to repeal and replace the Affordable Care Act. The IG subsequently dropped its examination after Murkowski declined to participate.

At the request of two Democrats, the Government Accountability Office is examining Zinke’s lobbying of Murkowski (E&E News PM, Sept. 8).

"I think there are sincere motivations," Rep. Jim Costa (D-Calif.), a centrist member of the House Natural Resources Committee, said of the various requests for inquiries, adding that "it’s one way" to get information.

An Interior Department spokesperson could not be reached to comment.

Litigation, too, provides a weapon for challenging Zinke’s leadership. So far, at least 83 lawsuits have identified Zinke as a defendant since Jan. 20, according to the PACER database. This is common. During a comparable period in 2009, the Obama administration’s first Interior secretary, Ken Salazar, was named in 113 lawsuits.

The latest complaint about Zinke, not filed in court, involved ForthRight Strategy, a marketing and fundraising firm that says it will "deliver results" for conservative candidates and causes.

The firm’s home page as late as yesterday featured a slide show of quotes from satisfied clients. They included Zinke, who used the company for his 2014 and 2016 House campaigns.

"You guys are in large part why I had the money and support that afforded me the opportunity to become a Congressman for the at-large seat in Montana," the Zinke quote stated in part. "Your results and personal commitment to Team Zinke were bar none!"

The website has since dropped the quotes from Zinke and others.

"The Zinke testimonial was placed on our website two years ago," Forthright Strategy CEO Kimberly Bellissimo said in an email today. "It has since been removed."

Bellissimo added, in the email first reported by the conservative Daily Caller, that "we are proud of our service to then Congressman Zinke and are proud of Secretary Zinke’s service to our country."

Even had it stayed, the Zinke quote might have been a weak reed upon which to hang a formal complaint.

Unlike Zinke’s congressional focus, the Office of Government Ethics places its emphasis on avoiding endorsements that imply agency backing.

"Executive branch employees may not use their Government positions to suggest that the agency or any part of the executive branch endorses an organization (including a nonprofit organization), product, service, or person," the OGE states on its website.

In one legal advisory, the OGE elaborated that a key question is "whether a reasonable person would construe a reference to an employee’s title, position, agency, or government affiliation as implying government sanction or endorsement."

For instance, the ethics office stated in February that "there is strong reason to believe" that White House senior adviser Kellyanne Conway violated the rules when she touted Ivanka Trump’s fashion line in an interview from the White House Briefing Room.

Conway was flanked by a White House sign and an American flag when she said, "Go buy Ivanka’s stuff." The White House subsequently described her actions as inadvertent, with then-spokesman Sean Spicer saying Conway had been "counseled." He did not explain what that meant.

The OGE cites, by contrast, as an example of permissible behavior, an EPA administrator writing to a company to say its operations complied with federal law "even though he knows that the company routinely displays letters of this type in TV commercials."