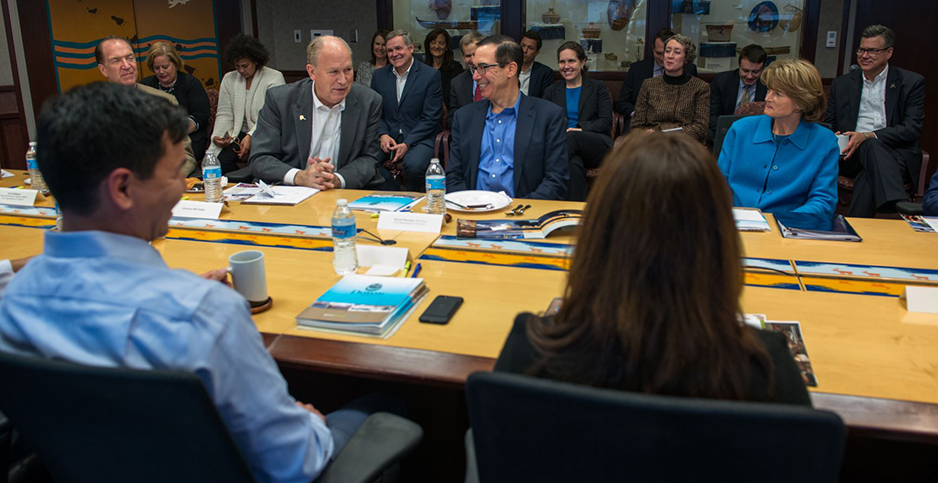 (Left to right) Alaska Gov. Bill Walker (I) holds a briefing with Treasury Secretary Steven Mnuchin and Sen. Lisa Murkowski (R-Alaska) in Fairbanks on Sunday on the development of a natural gas pipeline and export project. Office of Gov. Bill Walker

The state of Alaska is getting decidedly mixed messages from the Trump administration on the best way to commercialize the state’s 35 trillion cubic feet of proven natural gas reserves that are now stranded on the North Slope.

On Sunday, Treasury Secretary Steven Mnuchin backed the state’s proposed Alaska LNG project, a $44 billion venture that would include construction of an 800-mile pipeline to ship gas to an export terminal along Alaska’s southern shore.

Mnuchin stopped in Fairbanks for talks with Alaska Gov. Bill Walker (I) and Sen. Lisa Murkowski (R) after attending an annual meeting of the International Monetary Fund and World Bank in Indonesia.

Walker said Mnuchin has repeatedly expressed "strong support" for the Alaska LNG project. "He understands that this is America’s infrastructure project and that it represents a trillion-dollar opportunity," the governor said in a statement.

But at the same time, Interior Secretary Ryan Zinke is suggesting that the federal government host an LNG export facility in Alaska’s Aleutian Islands, with gas shipped to the site by tanker from the North Slope.

Zinke told the Associated Press that the Trump administration is considering use of military bases to ship fossil fuels from the West Coast and thus circumvent environmental opposition.

He noted that coal and natural gas interests are appealing for more export capacity to reach markets abroad, specifically in Asia. However, state regulators in California, Oregon and Washington have rejected proposals for private terminal projects (Greenwire, Oct. 15).

Zinke’s only example of a potential military site that could be used for export was the former Naval Air Facility Adak, located 1,200 miles southwest of Anchorage. Built during World War II, the Adak military site was shuttered in 1997.

Early this year, an Interior Department official told Alaska officials that Zinke, a former Navy SEAL, trained in the Aleutians during the 1980s.

In response to Zinke’s comments, the Alaska Gasline Development Corp. (AGDC), the state agency in charge of the Alaska LNG project, expressed cautious support for the White House’s interest in Alaska natural gas.

He added: "We appreciate the Trump administration’s advocacy for the Alaska LNG project and the major trade and economic benefits it will bring to the nation, and thank Secretary Zinke for his interest in developing Alaska’s natural resources and exploring ways to bring them to market."