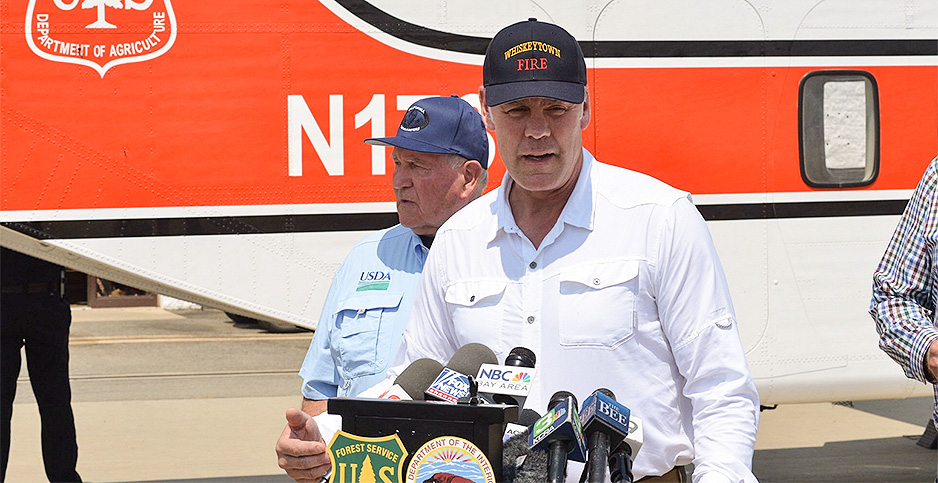 Interior Secretary Ryan Zinke speaks in Northern California during the Carr Fire in August. He’s headed back to the state today to observe the response to current wildfires. @SecretaryZinke/Twitter

Interior Secretary Ryan Zinke’s visit starting today to the front lines of California’s devastating wildfires represents something of a do-over for the Trump administration as well as a crucially timed leadership opportunity for Zinke himself.

Today’s tour of the Camp Fire near the city of Chico in Northern California, and a planned visit tomorrow to the Woolsey Fire burning around Thousand Oaks and Malibu in Southern California, puts Zinke in the presence of still-uncontained catastrophes that strain state and federal resources.

To make the California trip, Zinke canceled his planned participation in a weeklong trip to Asia led by Vice President Mike Pence.

After arriving in California last night, Zinke traveled to Chico this morning for a planned meetup with Gov. Jerry Brown (D) and Federal Emergency Management Agency Administrator Brock Long and a briefing at the fire’s command center established at the Chico Fairgrounds.

The center implements a unified command linking the Forest Service with the California Department of Forestry and Fire Protection, the Butte County Sheriff’s Office and the Paradise Police Department. More than 5,600 firefighting and support personnel are on scene, including the crews of 630 engines and 23 helicopters.

Part of Zinke’s role this week is to assess conditions that might inform federal manpower and budget allocations.

More broadly, what Zinke learns could also shape his policy assessments on everything from forest thinning to climate change. He’ll be briefing President Trump on his return to Washington, D.C., Swift said.

"They know the secretary knows California," Swift said. "He knows the governor."

The policy lessons, in turn, will have to be tempered by the political reality that the Interior Department, starting next January, will face a House controlled by Democrats with different ideas about environmental protection and wildfire causation, among other things (E&E Daily, Nov. 8).

That means, for instance, that leadership of the House Natural Resources Subcommittee on Federal Lands will pass out of the hands of Rep. Tom McClintock, a California Republican and a dogged proponent of legislation to boost forest thinning efforts.

The Hawaii Democrat poised by seniority to become the subcommittee’s chair, Rep. Colleen Hanabusa, received a 97 percent vote rating last year from the League of Conservation Voters. McClintock scored a zero rating from the environmental group.

The Camp Fire has burned 135,000 acres, consumed more than 7,000 structures and wiped out the town of Paradise. The Woolsey Fire has burned 93,622 acres and destroyed 435 structures, according to the Boise, Idaho-based National Interagency Fire Center.

Forty-eight deaths have been attributed to the Camp Fire, now the deadliest in California’s history.

"There is no reason for these massive, deadly and costly forest fires in California except that forest management is so poor. Billions of dollars are given each year, with so many lives lost, all because of gross mismanagement of the forests," the president tweeted from Paris on Saturday. "Remedy now, or no more Fed payments!"

Since then, Trump’s Twitter observations about the ravaged state he lost by 4.3 million votes in 2016 have veered from the traditionally sympathetic to the sharply critical and back again.

Three days ago, Trump declared, "With proper Forest Management, we can stop the devastation constantly going on in California. Get Smart!" while yesterday he offered that "we mourn for the lives lost and we pray for the victims of the California Wildfires" and he expressed thanks to "the Firefighters and First Responders for their incredible courage in the face of grave danger."