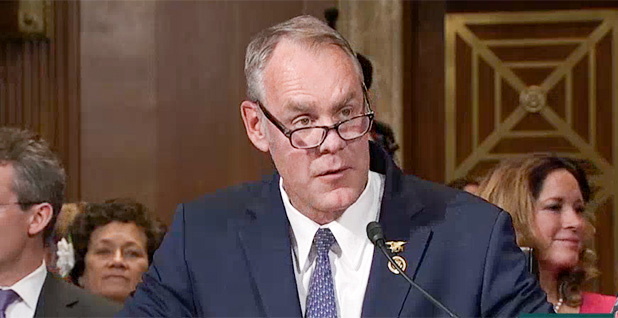 Fidelity National Financial Inc. — a Jacksonville, Fla., title insurance company that offers services across the country — disclosed that it lobbied in support of President Trump’s nominee for Interior toward the end of last year.

Contributions from Fidelity’s executives and employees make the Fortune 500 company Zinke’s largest campaign donor, according to the Center for Responsive Politics, a campaign finance watchdog group. Overall, the two-term House member collected more than $154,000 in contributions from those affiliated with the insurance company.

John Benton, who handles governmental relations for Fidelity, told E&E News that the reason for the corporation’s lobbying in support of Zinke was simple. Fidelity’s nonexecutive chairman, William Foley II, is a good friend of the congressman.

"Our chairman, Bill Foley, lives in Whitefish, Mont., where Ryan Zinke is the congressman," Benton said. "He really likes the guy. He think he’s a straight shooter."

A Fidelity National Financial executive sent a letter of support for Zinke’s nomination for Interior secretary to each member of the Senate Energy and Natural Resources Committee, according to Benton. The company’s lobbying for Zinke’s confirmation consisted of that one letter to ENR panel members.

"I think it is a wise use of company resources," Benton said. "We wrote a character reference. We don’t have a vested interest. We are not trying to drill."

Ethics watchdogs saw Zinke’s lobbying support from a campaign donor as more evidence that corporate interests will have sway in the Trump administration.

"It is rather emblematic of what we are seeing throughout this administration. … This is really becoming a corporate Cabinet," said Craig Holman, government affairs lobbyist for Public Citizen. "A major corporation is a major campaign donor and then is lobbying for this nominee."

While Fidelity may have no interests before Interior, the insurance company could be seeking favor elsewhere in the Trump administration. Supporting a high-profile nominee couldn’t hurt in that effort, according to Holman.