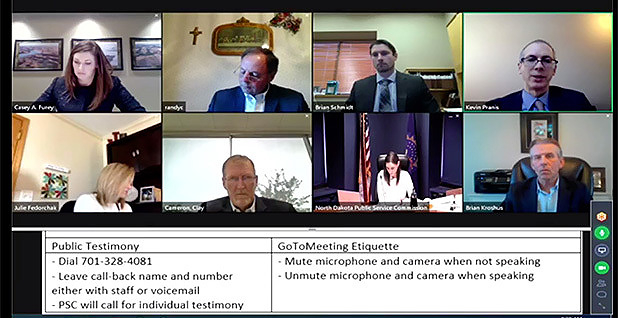 "Our legal team is very actively researching how to conduct the board’s and commission’s business and do so in a remote environment," Schilling said. So far, none of the hearings has been rescheduled and no new ones put on the calendar.

Not only is it a technical challenge, it raises questions of fairness. The stakes are high for developers. And government bodies don’t want to needlessly stall projects that could bring investments and jobs to their regions. But they also must make sure no voice is ignored because projects can have lasting impacts on communities.

And Maryland’s Public Service Commission has canceled at least three public hearings for wind and solar projects and is in the process of moving those meetings online, spokeswoman Tori Leonard said. In neighboring Virginia, regulators are making decisions to cancel public hearings on a case-by-case basis, State Corporation Commission spokesman Ken Schrad said.

Minnesota’s Public Utilities Commission canceled all meetings from mid-March through the first week of April. The commission resumed planning and agenda meetings via Webex, but it’s still evaluating with partner agencies such as the Office of Administrative Hearings and Department of Commerce on how to push ahead with public hearings.

"We recognize that broadband access is not ubiquitous," Seuffert said. "We want to make sure the new normal … doesn’t create advantages and disadvantages."

New Mexico’s congressional delegation is calling for extending a 60-day public comment period on a draft environmental impact statement until it’s safe to attend public meetings, noting that any decision on nuclear waste storage may have long-lasting consequences.

Beyond Nuclear, a frequent industry critic, is part of a coalition seeking a 199-day comment period and meetings in a number of states that could occur once it’s safe to gather at public events.

"You know," he said, the "Norman Rockwell town hall meeting where people can look at each other in the eye and can say what they have to say. And it’s called democracy."

For its part, Holtec International, the company proposing the New Mexico site, doesn’t object to having the NRC consider more time for comments.

"Stakeholder participation is an important part of the regulatory approval process and Holtec welcomes continued feedback," spokesman Joe Delmar said in an email. "An extension is the NRC’s prerogative and considering the current environment it seems appropriate for the NRC to give ample opportunity for public comment."

"At this critical time, it’s imperative the commission operate as close to normal as positive so industries we regulate are well-positioned to contribute to the nation’s economic recovery when we all return to work," Chatterjee said last week during FERC’s monthly tele-meeting.

The public was invited to participate and watch on the PSC’s website. People could call in and comment, or chime in electronically or by mail.

"A goal of the commission is to try to continue to provide the service that we’re obligated to provide under the law despite the challenging times," Commissioner Julie Fedorchak told parties. "Necessity is the mother of invention, they say, and here’s what we came up with for this hearing."

In many states, it’s local governments that oversee siting of some energy projects.

Sarah Mills is a University of Michigan professor who, through a state grant, provides technical assistance to communities in the state that are developing zoning ordinances for wind and solar projects. She’s witnessed one township after another cancel meetings since stay-at-home orders took effect.

Mills said she doesn’t believe the postponements have had a material effect on project development — at least not yet. In fact, she sees an opportunity for communities to work on land use and zoning issues and be prepared to address developer proposals when the stay-at-home order is lifted.

"This won’t last forever," Mills said. "And it will take time to get the clean energy supply chain to recover. Maybe this pause gives people a little bit of time to get their ducks in a row."

She’s not the only one who sees a potential silver lining to unwelcome circumstances.

Fedorchak, the North Dakota regulator, said she’s been interested in expanding electronic access to meetings "for quite some time."