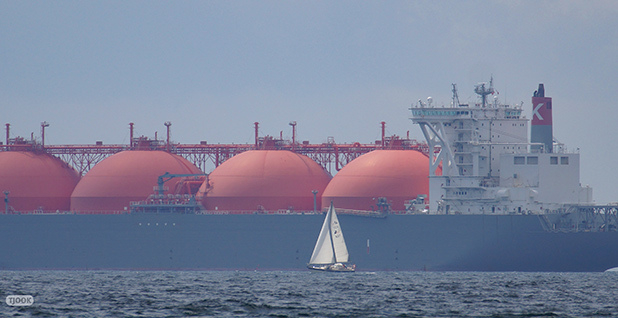 Who is using the fuel of the future? A sailboat catches a breeze near a liquefied natural gas tanker off the coast of Skagen, Denmark. Photo courtesy of Flickr.

While energy experts have promoted natural gas as a "bridge fuel" that can help the world shift from coal and oil to more carbon-neutral alternatives, even the "bridge" will need to be dismantled to achieve a low-carbon energy economy, experts with the Carbon Tracker Initiative (CTI) say in a new analysis.

When that happens, energy firms and investors with deep holdings in liquefied natural gas — the world’s only exportable form of gas — could be forced to shed as much as $283 billion in capital expenditures by 2025 as surplus gas loses value and LNG producers see their markets soften.

In fact, according to Carbon Tracker, the London-based think tank that has built a reputation for its analyses of energy markets, the United States and Canada will see demand for capital expenditures on LNG projects shrink by $153 billion over the next decade under a low-demand scenario, while Australia will see $68 billion of potential capital expenditures evaporate.

By 2035, the value of unneeded LNG projects will rise to $379 billion, according to CTI, a figure roughly one-third higher than the 2014 gross domestic product of Qatar, the world’s largest LNG producer, with 14 export facilities, known in the industry as "trains."

The report also finds that new infrastructure projects that rely on an LNG price of more than $10 per million British thermal units (MMBtu) may not be needed over the next decade.

Globally, gas prices have been below $10 per MMBtu since 2014, according to Platts data. The Platts Japan Korea Market (JKM) price, a leading Asian indicator, has hovered between $7 and $8 per MMBtu since March, while the U.K. National Balancing Point (NBP) price for European deliveries has been between $6 and $7 per MMBtu. In the United States, Henry Hub prices haven’t been above $10 since 2008 and are currently below $3 per MMBtu.

That doesn’t mean LNG markets will dry up. The analysis finds that "there is some room for gas demand growth" through 2040 as key markets remain strong for natural gas. And in its latest annual World Energy Outlook, the International Energy Agency forecast that demand for natural gas will rise 50 percent by 2040, making it "the only fossil fuel still growing significantly at that time."

Carbon Tracker’s analysis does not dispute such projections for gas, especially under a business-as-usual scenario.

"But," the analysis states, "if the world is to stay within a carbon budget that limits global warming to the 2-degree Celsius U.N. target, energy companies will need to be selective over which gas projects they develop."

Moreover, "[i]nvestors should scrutinize the true potential for growth of LNG businesses over the next decade," James Leaton, Carbon Tracker’s head of research, said in a statement. "The current oversupply of LNG means there is already a pipeline of projects waiting to come on stream. It is not clear whether these will be needed and generate value for shareholders."

According to the analysis, 16 of the 20 largest LNG firms in the world are currently planning major production or terminal expansions over the next decade, many of which may prove to be uneconomical.

In North America, CTI said growth within the gas industry "could fall short of industry projections," especially forecasts that rely on expectations of new LNG terminals exporting U.S. shale gas to Asia and Europe. Maintaining lower global carbon budgets will depend in part on "avoiding the combination of U.S. shale gas being exported as LNG," Andrew Grant, CTI’s lead analyst and a co-author of the report, said in a statement.

"We are still reviewing the document, but our view is that the market should — and will — determine the future of LNG exports of U.S. natural gas," Dan Whitten, spokesman for America’s Natural Gas Alliance, a trade association, said of the analysis.

"The abundance of affordable natural gas from America’s shale regions has been a game changer domestically, and we expect to be a significant player in international markets, including across Europe, which will clearly benefit from as much energy diversity as possible," Whitten said in an emailed response to questions. "We are confident that greater use of natural gas will contribute to significant greenhouse gas emissions reductions worldwide."

"America is leading the world in reducing greenhouse gas emissions, with carbon dioxide emissions near 20-year lows, and that progress is being driven by the development of America’s abundant natural gas resources," he said in an email. "These investments have allowed America to become the world’s top natural gas producer, and they will continue to serve as a great example of how we can grow the economy, create millions of jobs, build energy security, and clean the air."

A market of ‘increasing volatility’?

In June, the Natural Gas Supply Association said 94 "major natural gas-intensive industrial projects have been or will be completed" between 2012 and 2020, collectively worth between $110 billion and $120 billion.

Yet sliding commodity prices can delay or derail projects before they even begin, as Chesapeake Energy Corp., the second-largest U.S. gas producer as of last year’s fourth quarter, warned investors in a May presentation.

Chesapeake officials estimated a 45 percent cut in capital expenditures this year below 2014 totals. Earlier this year, Exxon Mobil Corp. cut capital spending 12 percent for 2015 from last year, and dozens of oil and gas suppliers have reined in their spending and idled hundreds of rigs.

Upstream capital expenditures dipped 12 percent year over year in 2014’s fourth quarter, according to statistics from the U.S. Energy Information Administration. Capital expenditures in Canada will drop about 18 percent in the mining, quarrying and oil and gas sector compared to last year, the Canadian government’s statistics wing forecast yesterday.

According to the latest global market report from the British gas exploration and production firm BG Group, LNG deliveries have been effectively flat over the last three years despite rising exports from Australia, Africa and Papua New Guinea.

BG, which has been targeted by rival Royal Dutch Shell PLC in a $70 billion takeover bid, also forecast that "the global LNG market will be marked by increasing volatility as we see new waves of supply start to add volume together with new markets opening up."

Among the most promising emerging LNG markets, BG said, are the Middle East, the Philippines, Poland and Uruguay. Those regions, along with other established markets like Japan, Korea, China and India, will help drive an expected 5 percent compound annual growth rate through 2025, according to BG’s market analysis.

The Carbon Tracker gas analysis is the last in a series called "Carbon Supply Cost Curves" that has examined investor risk associated with a variety of fossil fuels, including oil and coal. The think tank issued reports on those fuels last year.