5 key combatants for WOTUS fight in the Trump era 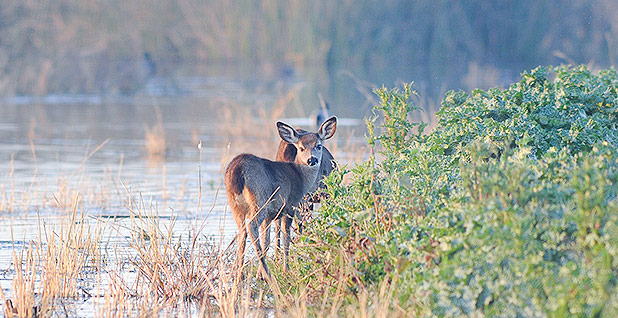 President Trump's nominee to lead U.S. EPA, Scott Pruitt, has said one of his top priorities is repealing and replacing the Clean Water Rule, which determines whether wetlands fall under federal jurisdiction. Photo by George Lamson, courtesy of U.S. Fish and Wildlife Service.

At this time in 2016, courts were flooded with lawsuits over an Obama administration rule aimed at highlighting isolated wetlands and streams that would get automatic federal protection under the Clean Water Act.

U.S. EPA and the Army Corps of Engineers wrote the regulation in an effort to clarify the reach of the law, which regulates "the discharge of dredged or fill material into waters of the United States."

But a court stayed the Clean Water Rule — also known as "Waters of the U.S.," or WOTUS — days after it was finalized. And now Oklahoma Attorney General Scott Pruitt (R), who filed one of the first lawsuits against WOTUS, is poised to lead President Trump’s EPA.

Pruitt has vowed to ditch WOTUS, but replacing it — a goal for agribusiness and developers alike — won’t be easy given the rule must be scientifically and legally defensible (Greenwire, Feb. 10).

Here are key players on WOTUS:

Parrish, senior director of regulatory relations for the American Farm Bureau Federation, is one of the Obama rule’s biggest critics.

The issue is a personal one for Parrish, who has family and friends in the livestock business.

To Parrish, the Obama regulation, which covers more tributaries than guidance written under George W. Bush’s administration, simply drew bright lines where environmentalists requested them without listening to farmers.

"It was a more liberal reading of the Clean Water Act, and they were going to push the limits of jurisdiction as far as they could," he said.

If the Trump administration goes back to the drawing board on WOTUS, Parrish said, it should check first with farmers and ranchers.

As Parrish sees it, WOTUS was the latest step in a "fairly blunt policy shift" in how the United States has viewed wetlands.

"There was a time in our nation where the only real way of getting rid of mosquitoes and the diseases they carry was to drain the swamps where they lived and turn them into converted croplands," he said. "Doing that improved the health of our nation and provided the breadbasket of agricultural productivity we now have."

While the nation "regrets" the environmental damage done to wetlands, he said, environmentalists and regulators "are trying to make up for it by being overly protective and penalizing farmers."

He said environmentalists often forget "all water in this country is regulated," whether or not it is covered by the Clean Water Act.

But while states regulate the dumping of fill material into wetlands, Parrish said federal penalties are far harsher.

"That’s why we’re so passionate about this," he said. "If we can’t help them represent themselves in something with those kinds of penalties, then we are not doing our job."

Goldman-Carter’s first job out of graduate school in 1980 was as an EPA biologist. She helped write guidelines for how to define the term "waters of the U.S." for Section 404 of the Clean Water Act.

Three decades later, that question about those waters still lingers, and Goldman-Carter is still working on it, now as an attorney for the National Wildlife Federation, where she is senior manager of wetlands and water resources.

Goldman-Carter, who grew up fishing in Florida’s Everglades, said her efforts during the Trump administration will be focused on fighting attempts to weaken WOTUS.

If Pruitt asks the court for a voluntary remand to EPA to reconsider the regulation, she said, "NWF would challenge that" and ask the judge to first rule on the regulation’s legality.

"We have gotten this far down the pike in terms of judicial review," she said. "We want to see a court ruling on the merits."

But NWF isn’t just concerned with winning the legal fight; it also plans to battle it out in the court of public opinion.

"We want to make sure the issue of clean water is really elevated in the public eye and that the public is aware of the threats to clean water and how this rule fits into that," she said.

That job is made more difficult by the fact that WOTUS covers such an arcane issue, Goldman-Carter said, acknowledging that the general public may not instinctively grasp how a regulation outlining federal jurisdiction is important.

"I think when you show people individual streams that are close to them, or the actual wetlands that are vulnerable, people do care about that and expect them to be protected," she said. "We want to point out those types of water bodies to explain how their protections are at risk."

McDonough was introduced to the WOTUS debate long before he became environmental policy director for the National Association of Home Builders.

As a doctoral candidate studying aquatic ecology at University of Maryland, he focused his research on how otherwise isolated wetlands on Maryland’s Eastern Shore interacted with downstream waterways.

He started his research in 2006, the same year the famous Rapanos v. United States case on wetland regulation was argued before the Supreme Court. In the Rapanos decision, a 4-1-4 muddle, Justice Antonin Scalia led conservative justices in arguing the Clean Water Act strictly applied to "navigable waters," while the court’s four liberals argued for a far more expansive view of the law.

Justice Anthony Kennedy, the court’s swing vote, ultimately sided with conservatives, agreeing to throw out the EPA regulation while arguing some wetlands should be covered by the law. In order to qualify for federal protection, he wrote, waters must have a "significant nexus" to actually navigable rivers and seas.

"Back then, I had no idea my career path would track so closely to this issue," McDonough said.

At NAHB, McDonough said, his hours of field work have helped him argue that the Obama administration overreached.

"I bring a unique perspective to the issue having been at the forefront of the science to understand this issue of connectivity," he said.

With WOTUS stayed by a federal court, NAHB hopes the Trump administration will take time to craft a well-thought-out, clear rule.

In the meantime, NAHB has been meeting with officials at EPA and the Army Corps to explain its concerns, particularly the aspects of the regulation that don’t provide enough clarity for small businesses that don’t have many resources to hire consultants.

"The challenge everyone is facing now is to what degree should science inform policy questions given the limited jurisdictions that have been placed on the agencies by Congress and court opinions?" McDonough said.

Driscoll, the National Farmers Union’s conservation policy director, isn’t happy with WOTUS but is also wary of efforts to replace the regulation.

Echoing the complaints of many industry groups, Driscoll maintains the Obama EPA bungled its rollout of the rule by meeting with farmers and homebuilders after the proposal was on the streets.

But while EPA "didn’t do themselves any favors in how they approached this," he said, his group has "never entertained the thought that EPA was maliciously intending to bring every farmer in the country under jurisdiction."

In fact, while Driscoll is not happy with everything in the final rule, he notes that the Obama administration did ultimately listen to some of NFU’s concerns and excluded certain types of ditches from the final regulation.

Though he would like to see more aspects of WOTUS rolled back, Driscoll said he is likewise concerned that a Trump EPA might go too far.

"Farmers and ranchers need some amount of regulatory relief, but they also rely on the government to step up and protect natural resources like water and air," he said. "We don’t love the definition that’s being litigated right now, but I’m not sure this administration is going to come up with something we would find more pleasing."

Instead of having the Trump administration rewrite the regulation, Driscoll advocates that it be left alone and states take charge of issuing permits for dredging and filling wetlands and water waterways — an approach mirroring that for other air and water programs.

Doing so could streamline permitting, he said, and ensure that permit writers are familiar with both the lay of the land and the industries they regulate.

"I think the difficulty is that you have government bodies addressing this that might not be the best suited for it," he said of the Army Corps, which currently issues such permits under the Clean Water Act. "Giving states the authority to have those conversations might be a better route."

He notes that any attempts by the Trump administration to change the rule would need scientific backing. As EPA chief, Pruitt would have to dispute, among other things, the 408-page technical report that accompanied the Obama regulation and a review from the agency’s Science Advisory Board, which largely supported the final version of the rule.

"I am comforted by the fact that any attempt to revise the rule will have to take into account the scientific record that exists for the current rule," he said.

Devine also noted that WOTUS was specifically written to meet the "significant nexus" test set up by Kennedy in Rapanos.

"The basis for this rule is right over home plate, right over the ‘significant nexus,’" he said. "Walking away from all of that is going to be a hard row to hoe."

He characterizes most industry objections to WOTUS as procedural, relating to whether EPA followed all the steps laid out in the Administrative Procedure Act.

"Their claims about the science the regulation relies on are either minimal or nonexistent," he said. "If the new administration wants to re-look at this rule and do so consistent with the science, if they do so objectively, I have every expectation that they will find nothing to roll back."

While Devine said he did not want to speculate about whether the Trump administration would ask the court for a voluntary remand or just provide a lackluster defense for the rule, he noted that the NRDC is a party to the case, meaning it can speak up for the regulation.

"If they try to roll it back, we are prepared to fight," he said.