5 priorities for Todd Kim, the new head of DOJ environment 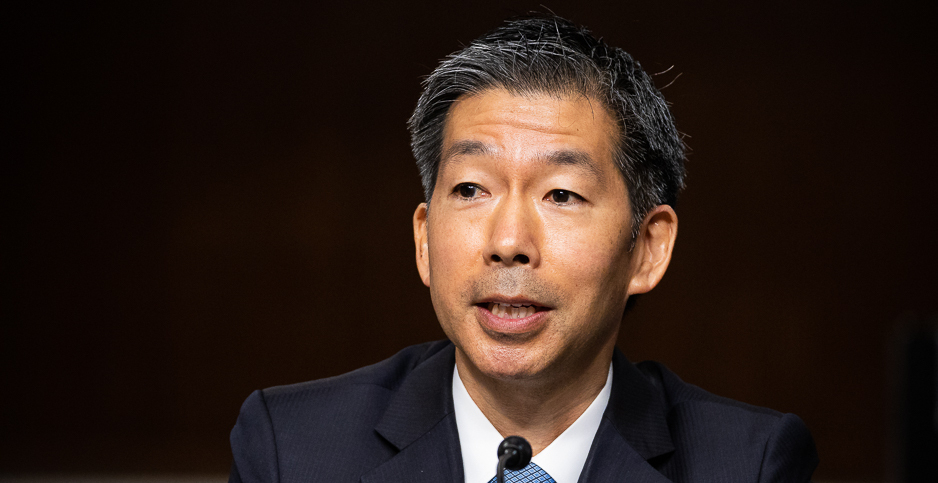 Legal experts have big expectations for what Todd Kim can achieve now that he has been confirmed as the leader of the Justice Department’s environment division.

Environmental lawyers say they are confident that Kim, who previously served as a trial attorney for DOJ’s Environment and Natural Resources Division (ENRD), is well equipped to hit the ground running on some of the nation’s most pressing climate and energy issues now that he is assistant attorney general in charge of the division (Greenwire, July 27).

They hope that Kim will work quickly to undo the Trump administration’s efforts to bolster oil and gas development and weaken bedrock laws like the National Environmental Policy Act and Endangered Species Act.

"He needs to reach out soon to the public interest groups that spent the last four years fighting the Trump administration’s agenda and work with us to honestly assess whether ENRD’s continued defense of that agenda really serves the law and the long-term interests of the American people," said Sam Sankar, senior vice president for programs at Earthjustice.

Kim’s biggest challenge may be balancing environmentalists’ expectations with the difficulties of switching DOJ’s position in swaths of lawsuits and the reality that the nation’s courts are now stacked with many more conservative jurists, said Kelly Johnson, a partner at the firm Holland & Hart and a former high-ranking ENRD official during the George W. Bush administration.

"That affects your litigation strategy," she said. "Everybody may agree there’s a certain policy you want to advocate for, but when litigation ensues, you’re constrained on what you can do."

DOJ observers have overwhelmingly positive expectations for how Kim’s leadership will affect employee morale at an office that has been rocked by political scandal. Career attorneys throughout DOJ were discouraged by former President Trump’s push to use the department to pursue unsubstantiated claims of election fraud.

Jeffrey Bossert Clark, who led ENRD during the last two years of the Trump administration, faces allegations that he was part of that push, which reportedly culminated in a failed effort to force out then-acting Attorney General Jeffrey Rosen. The allegations are under investigation by DOJ and the Senate Judiciary Committee (E&E Daily, Jan. 25).

"Kim is going into a division that is really anxious to have him and excited to have him," said Johnson. "Even if it is a virtual office, I can’t imagine what his inbox is going to look like on Day 1."

Here are five things Kim is expected to accomplish as head of DOJ’s environment division.

Kim’s arrival at ENRD could bring about a seismic shift in legal battles over climate.

Environmental advocates are calling on President Biden’s DOJ to back lawsuits by state and local governments across the country seeking compensation from the fossil fuel industry to address wildfires, hurricanes and other climate-induced disasters.

They want the president to make good on his campaign promise to "strategically support" the growing body of climate liability lawsuits.

"The Justice Department has a clear mandate to hold polluters accountable and investigate acts of fraud — especially those as consequential as the fossil fuel industry’s concerted, decades-long campaign to mislead and lie to the American public about the catastrophic climate damages they knew their products would cause," said Richard Wiles, executive director of the Center for Climate Integrity, in a statement yesterday.

DOJ is facing similar pressure from states and lawmakers to reverse course from the legal strategy of the Trump administration, which backed oil and gas companies against climate liability claims (Climatewire, April 7).

The lawsuits are still in their early stages, as the courts sift through a procedural question of whether the legal battles should be decided by state or federal judges. State and local officials have filed the suits in state courts, but industry lawyers want the cases heard in federal court, where they may be more likely to be dismissed.

Earlier this year, the Supreme Court sided with oil and gas companies on a narrow technical issue that could help determine the jurisdictional question (Climatewire, May 18).

It’s not yet clear what steps Kim will take to carry out Biden’s goal of addressing environmental harm to low-income and minority communities.

During his confirmation hearing, Kim did not receive specific questions from the Senate Judiciary Committee about how he would carry out the administration’s environmental justice goals (Greenwire, April 14).

Even if DOJ does not establish an office specifically focused on environmental justice, Kim could make the issue a lens through which ENRD carries out its civil and criminal work. Kim could also staff his team with environmental justice advocates — if he can find people who have not already been tapped for other positions in the administration.

"Because of the time that it’s taken to get him in place, there’s going to be a huge backlog of semipolitical decisions that need to be made," said Sankar of Earthjustice. "He should be prioritizing the decisions that are going to align ENRD as closely as possible to Biden’s environmental justice agenda."

Kim is expected to increase environmental enforcement, which fell to record lows during the Trump years — but to achieve that goal, he’ll need a few more colleagues in place.

Johnson of Holland & Hart said she expects Kim to reach out to client agencies like EPA to start building enforcement case lists, but she added that it would be helpful to have a confirmed head of the agency’s Office of Enforcement and Compliance Assurance (OECA).

Uhlmann published a paper last year that found that DOJ prosecutions of Clean Water Act and Clean Air Act cases had dropped 70% and 50%, respectively, during the first two years of the Trump administration.

Prosecutions had been falling during the Obama years, but "the bottom fell out" under Trump, the paper said.

The Trump team defended its enforcement record by saying the administration was focused on securing high-dollar penalties, rather than the quantity of cases it was pursuing.

When Johnson served as ENRD’s principal deputy assistant attorney general during the Bush years, she was in her post before Kim’s then-counterpart was installed.

DOJ observers say there has been no word on who might serve as Kim’s top deputy, and they are unsure when that person will be in place.

The position is a crucial one and could be filled with a person chosen by Kim or the White House.

ENRD has been operating under career DOJ attorney Jean Williams since January. While observers say this is a testament to Williams’ talents and deep experience at the division, they also say ENRD has felt the strain of the absence of a political leader during the first months of the Biden administration.

"Once Todd’s there, I think some of the deputies will fall into place," Johnson said.

After suffering from political turmoil during the Trump era, ENRD staff appear eager to have Kim on board.

Kim spent seven years at ENRD early in his legal career and has a wealth of knowledge on environmental issues that will be a key focus for the Biden team, such as Clean Water Act jurisdiction (Greenwire, March 18). He worked for the division during both Democratic and Republican administrations.

He has also served in private practice at the law firm Reed Smith LLP, which represents entities that are subject to the nation’s environmental laws.

"They’re ready and eager to have Todd on board," Earthjustice’s Sankar said of ENRD staff. "He has a lot of respect as an environmental litigator and as a good listener who is really open to different perspectives."