5 takeaways from the Democratic debates 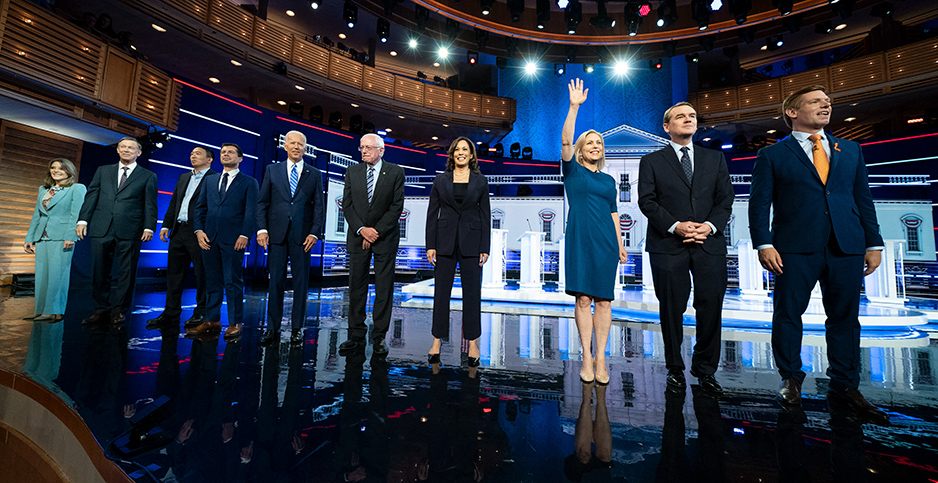 During the four hours of Democratic debates Wednesday and last night, discussion of climate change lasted less than 17 minutes total, far from the starring role activists and some candidates had hoped.

The presidential primary debates, hosted in Miami by NBC News, MSNBC and Telemundo, were the first matchups of the 2020 campaign, each featuring 10 of the top candidates out of the field of more than two dozen.

With the location at the front lines of global warming’s impacts and the increasing attention among Democratic voters, the pressure had been on for the hopefuls to fight it out on the issue.

While climate was one of just a handful of main topics garnering questions, alongside immigration, gun violence, the economy and other areas, it got a small portion of the time.

At Wednesday’s event, the climate change questions and answers took up less than eight minutes. Yesterday, it was slightly more time, but still less than nine.

That meant only a small portion of the candidates could talk about their plans, giving almost no room for the back-and-forth that some viewers crave in head-to-head debates.

It left environmental groups disappointed, with some renewing their call for a Democratic debate dedicated to climate — a call the Democratic National Committee has steadfastly rejected.

"This is not how you behave in an emergency," said Janet Redman, Greenpeace USA’s climate campaign director. "Despite the candidates’ acknowledgement of the existential threat that climate change represents to humanity, we heard next to nothing over two days about how they would actually address this monumental challenge."

Few sparks on energy, the environment

With 10 candidates on the stage at a time, they occasionally did get argumentative with each other, particularly in areas such as racial equality and foreign policy.

But with so little time for climate and the environment, the presidential hopefuls didn’t battle one another on those issues. Instead, they mostly laid out their views and plans, largely talking past each other.

"We are the first generation to feel the sting of climate change, and we are the last that can do something about it," Washington Gov. Jay Inslee said at the Wednesday event.

Former Maryland Rep. John Delaney said, "All the economists agree that a carbon pricing mechanism works. You just have to do it right."

He added: "I can get that passed my first year as president, with a coalition of every Democrat in the Congress and Republicans who live in coastal states."

Some candidates took implicit or veiled jabs at others, but they did not spark fights.

"I’m a scientist, so I recognize that we’re within 10 or 12 years of actually suffering irreversible damage. But guaranteeing everyone a government job is not going to get us there," former Colorado Gov. John Hickenlooper said last night, a reference to the Green New Deal’s universal jobs guarantee.

"So socialism, in that sense, is not the solution. We have to look at what really will make a difference," said Hickenlooper.

Vermont Sen. Bernie Sanders remarked directly after former Vice President Joe Biden boasted of his record during the Obama administration: "Look, the old ways are no longer relevant. The scientists tell us we have 12 years before there is irreparable damage to this planet."

Some plans more fleshed out than others

No candidate seemed completely unprepared to talk climate, but some showed that they had more thought-out policy proposals than others.

Sen. Elizabeth Warren of Massachusetts, for one, outlined much of her green manufacturing platform at the Wednesday debate.

"We need to go tenfold in our research and development on green energy going forward," she said. "And then we need to say: Any corporation can come and use that research; they can make all kinds of products from it. But they have to be manufactured right here in the United States of America. And then we have to double down and sell it around the world."

Former Rep. Beto O’Rourke of Texas touted his own plan.

"We’re going to mobilize $5 trillion in this economy over the next 10 years," he said. "We’re going to free ourselves from a dependence on fossil fuels. And we’re going to put farmers and ranchers in the driver’s seat, renewable and sustainable agriculture, to make sure that we capture more carbon out of the air and keep more of it in the soil."

But others, including Sen. Kamala Harris of California, had few concrete policy proposals.

"I don’t even call it climate change. It’s the climate crisis. It represents an existential threat to us as a species," she said last night.

Harris added, "And the fact that we have a president of the United States who’s embraced science fiction over science fact will be to our collective peril." She promised to keep the United States in the Paris Agreement, before pivoting to North Korea.

Ohio Rep. Tim Ryan talked about producing solar panels and electric vehicles in the United States but quickly pivoted a climate question to one of his favorite topics, the Midwest.

"We have a perception problem with the Democratic Party," he said Wednesday. "We are not connecting to the working-class people in the very states that I represent in Ohio, in the industrial Midwest. We’ve lost all connection."

Even though there was little formal time for climate and the environment at the debates, candidates did use the issues to answer other questions.

In Warren’s first answer, on the economy under President Trump, she said it is "doing great for giant oil companies that want to drill everywhere. Just not for the rest of us, who are watching climate change bear down upon us."

Inslee, meanwhile, used discussion of the economy to take one of his favorite campaign-trail digs at the president.

"Donald Trump is simply wrong," Inslee said. "He says wind turbines cause cancer. We know they cause jobs. And we know that we can put millions of people to work in the clean energy jobs of the future."

Climate change got relatively little time, but what it did get was still more than other energy and environment topics received.

None of the moderators’ questions were on any energy and environment-related areas apart from climate. But the candidates nonetheless touched on the topics occasionally on their own.

New Jersey Sen. Cory Booker, for one, called out both Halliburton Co. and Amazon.com Inc. as companies "that pay nothing in taxes, and [we] need to change that."

Rep. Tulsi Gabbard of Hawaii said she would pull the United States out of unnecessary, expensive wars and spend the money on "things like health care, a green economy, good-paying jobs, protecting the environment and so much more."

Clean air and water were occasional talking points. Gabbard said the White House under her watch would ensure that Americans "will have clean air to breathe and clean water to drink," and Biden said that "we have to make sure that they’re able to breathe air that is clean and they have water they can drink."

Hickenlooper brought up multiple times his role negotiating with environmentalists and the oil and natural gas industry toward Colorado’s 2014 methane emissions rules, the first in the nation. He cited it both as an environmental achievement and an instance of bringing different sides together.

"We were the first state in America to bring the environmental community and the oil and gas industry to aggressively address methane emissions," he said.