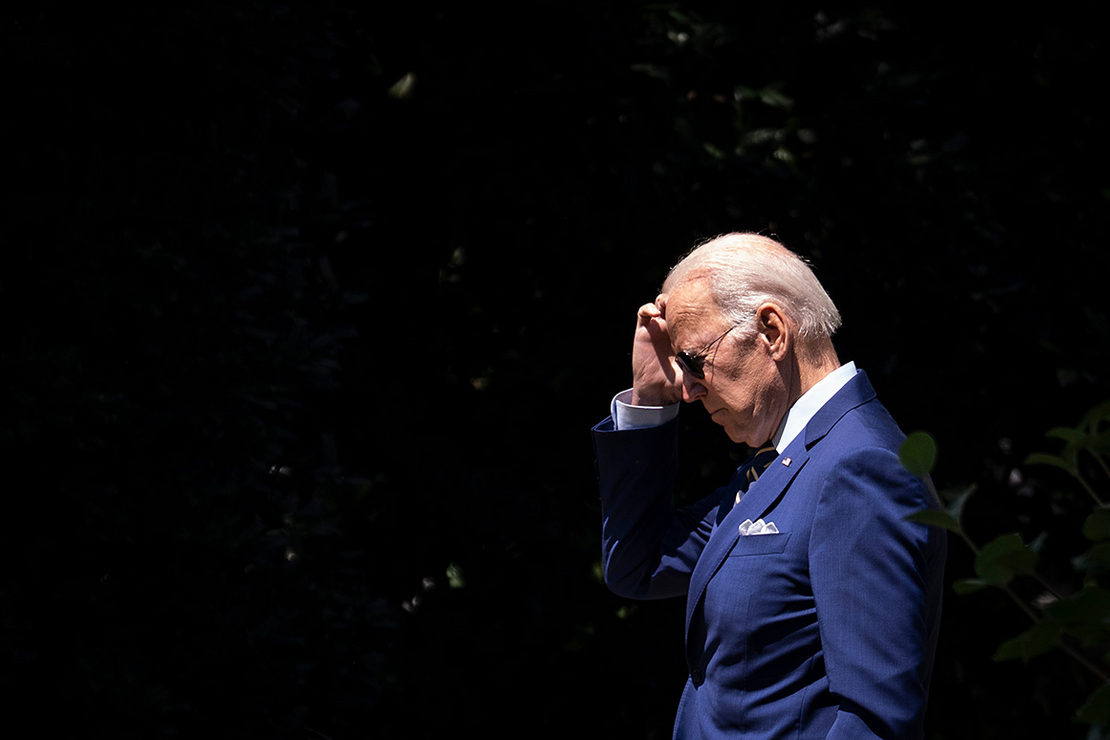 President Joe Biden walking to Marine One on the South Lawn of the White House on Wednesday. Biden was headed to Somerset, Mass., to deliver remarks on his next steps in addressing climate change. Drew Angerer/Getty Images

Climate hawks on Capitol Hill and in some environmental groups were disappointed when President Joe Biden made a big climate speech this week without officially declaring a national climate emergency.

Biden and his top climate aides have scrambled to chart the path ahead, even while suggesting that such a declaration is likely. They say the administration wants to evaluate any potential pitfalls before proceeding.

Biden said after his climate speech in Massachusetts on Wednesday that he hadn’t declared an emergency because “I’m running into traps on the totality of the authority I have.” His international climate envoy, John Kerry, told The New York Times that the president is “very close” to declaring an emergency, adding that there’s internal debate over how it should be done rather than whether it should happen.

While Biden weighs his options, energy and environment insiders were abuzz this week over the merits and possible pitfalls of a national climate emergency declaration.

Here are six complications that might pose hurdles to a climate emergency declaration:

Pretty much anything Biden does on climate using executive power will face legal challenges, and actions taken under a climate emergency declaration will be no different.

Even some of Biden’s allies who want to see more action on climate are warning that the legal landscape will be challenging, particularly after the Supreme Court’s recent ruling that said the Obama EPA had exceeded its authority when it issued its landmark Clean Power Plan rule to tackle climate change.

“There’s a strong argument for focusing on smart effective regulatory actions rather than getting sidelined into [a] swirl of conflict and litigation” over an emergency declaration, wrote Jody Freeman, founding director of Harvard Law School’s Environmental and Energy Law Program.

2. It won’t solve the problem

Declaring a climate change emergency unlocks new funding and authorities that Biden can use, but it doesn’t automatically trigger any actions.

A climate emergency declaration “could be an important and galvanizing tool” for mobilizing the federal government, said Sam Ricketts, Evergreen Action co-founder.

But although it would unlock some new authorities for the executive branch, those authorities are “modest,” and “that action must be joined also by other regulatory and executive actions” from agencies like EPA and the Interior Department, Ricketts said.

3. Biden can do a lot without an emergency

Even as calls for Biden to declare an emergency have intensified, environmental advocates say there’s plenty Biden can do now without the declaration — and they want him to get to it quickly.

Biden announced moves this week to boost offshore wind and help communities adapt to extreme heat, but climate hawks want him to make much bigger promises.

Officials vowed that there will be more to come in the next few weeks.

“The administration can act now under existing law to make big gains on climate, and it needs to,” said Jill Tauber, vice president of litigation for climate and energy at Earthjustice.

The administration could end offshore oil leasing, deny permits for oil and gas projects, finalize strict standards for automobile emissions, and move quickly to clamp down on greenhouse gases from the power sector, Tauber said.

Broadly, Jeremy Symons, an energy consultant formerly with the Environmental Defense Fund, said greens will be looking for action from Biden. The proof will be in “consistently standing up to the fossil fuel lobby rather than pushing clean energy goals to the sidelines whenever Joe Manchin or Republicans say boo,” he said.

Progressives have been urging Biden to declare an emergency, but in recent days some environmentalists have privately expressed caution.

They worry a declaration could be a nail in the coffin for some version of a climate reconciliation package, which fell apart last week due to opposition from Sen. Joe Manchin (D-W.Va.). In the days since, the conservative Democrat has suggested he could be open to a deal after the August recess, if inflation stabilizes.

Progressives with the Center for Biological Diversity and the League of Conservation Voters have taken strong public positions in favor of an emergency declaration, but others have stayed quiet. The Sierra Club and the Nature Conservancy, for instance, have yet to come out either way.

“Obviously we think the climate crisis is an emergency, and we are glad the president is treating it like the emergency it is, but formally invoking powers is yet another thing,” said Melinda Pierce, legislative director at the Sierra Club.

Longtime environmentalists say an emergency declaration is akin to a shiny object, but the executive branch is already equipped with a range of tools to cut emissions and propel renewables. For example, EPA can regulate methane emissions and set strict tailpipe standards.

If an order pans out, “it’s going to mean work,” Pierce said. “The proof is in the pudding.”

The administration is facing calls to declare not just a climate emergency, but also a public health emergency after the Supreme Court overturned federal abortion rights granted by the 1973 Roe v. Wade decision.

Asked this week whether there might be political considerations in the White House about whether a public health or climate emergency declaration is made first, Jean-Pierre cautioned against comparing the two.

“Declaring a public health emergency is very different from declaring a climate emergency,” she said. “Each unlocks a different set of authorities and a different pot of funding.”

6. Is climate change an ‘unforeseen’ problem?

David Bookbinder, chief counsel at the Niskanen Center who represented challengers in a case against former President Donald Trump’s border wall, said the argument can be made that climate change doesn’t fit the dictionary definition of an “emergency.”

Merriam-Webster defines an emergency as “an unforeseen combination of circumstances or the resulting state that calls for immediate action.”

In fact, environmentalists challenged Trump’s argument that a national emergency declaration justified his effort to redirect funds to build a wall along the southern border.

In early 2019, he said there was an “invasion of drugs and criminals coming into our country.”

“We’re going to confront the national security crisis on our southern border, and we’re going to do it one way or the other,” Trump said at the time.

The Sierra Club sued, arguing that Trump himself had said his border emergency declaration was needed to address a “long-standing” problem of “large-scale unlawful migration” to the United States. “In fact, there was and is no national emergency to justify the President’s action, only his disagreement with Congress’s duly enacted decisions on the extent and pace of spending on the border wall,” the environmental group wrote in the lawsuit.

A federal appeals court ruled in 2020 that Trump had wanted a border wall since early in his presidential campaign, and his wall-building efforts weren’t “unforeseen” (E&E News PM, June 26, 2020). Climate change, similarly, is not a new federal concern.

At the same time, emergency declarations have recently become more routine, with Trump declaring the Covid-19 pandemic an emergency and Biden using emergency powers to counteract the baby formula shortage.

Environmental lawyers say the courts are often deferential to presidents’ emergency declarations, and some predict he’d have more solid footing than Trump did.

“The climate emergency is more genuine than the immigration emergency,” said Michael Gerrard, founder of the Sabin Center for Climate Change Law at Columbia Law School.