A Texas-sized debate over wind farms and military readiness 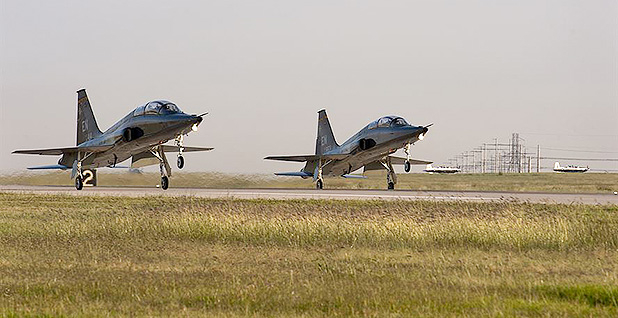 T-38 Talon training jets at Sheppard Air Force Base in Wichita Falls, Texas. Sheppard is one of several facilities where some military officials and lawmakers believe spinning wind turbines could interfere with the normal operation of aviation radar. Photo by Danny Webb, courtesy of the Air Force.

Since the mid-1960s, pilots at Sheppard Air Force Base have made supersonic training flights over the Texas Red River Valley, a region sufficiently remote that mostly cattle ranchers and oil riggers caught sight of the small planes known as "white rockets" as they streaked across the horizon.

But North Texas has changed over a half-century. Wichita Falls, where Sheppard remains a leading employer and a major military flight school, today claims nearly 105,000 residents and is the center of Texas’ 19th-largest metropolitan area.

The region’s energy profile has also changed. Where oil derricks once covered the landscape, today there is a growing emphasis on wind energy, much of it flowing along transmission lines from the state’s rural quarters to load centers like Dallas-Fort Worth, 140 miles away from Wichita Falls.

But as wind energy gains a larger foothold in North Texas, some say the region’s long association with military training is being compromised. Critics warn that hundreds of U.S. and NATO Alliance pilots who train at Sheppard could lose critical flight time, especially as new wind farms are built ever closer to the base and surrounding airfields.

Base officials contend that with the addition of wind turbines, controllers monitoring Sheppard’s airspace will see more than airplanes, as each spinning turbine creates a reflective signal that can be picked up by radar.

"The problem with that is you now have a large area of clutter," explained Air Force Lt. Col. Matthew "Shogun" Manning, director of operations for the 80th Operations Support Squadron, "so it becomes difficult for air traffic controllers to separate aircraft contacts from wind farm contacts."

Republican lawmakers, led by Texas’ own Sen. John Cornyn and Rep. Blake Farenthold, are bringing such concerns to the fore, asking Congress to pass a law intended to buffer Sheppard and other air bases, airfields and radar installations from commercial wind farms.

The legislation, titled the "Protection of Military Airfields From Wind Turbine Encroachment Act," would effectively strip federal tax credits from any new wind farm sited within a 30- to 50-mile radius of a military airfield.

In a statement, Cornyn said the legislation addresses concerns raised by military leaders and pilots in Texas about radar interference from spinning turbines, adding that the measure would "enhance public safety in communities adjacent to military bases and help our military better train to defend our homeland."

But wind industry officials, both in Washington, D.C., and Texas, say the proposed legislation is a solution searching for a problem.

They say military training, including the operation of radar systems, is not significantly affected by wind turbines. Moreover, where wind farms and other energy developments have posed challenges to military activities, the Federal Aviation Administration and the Defense Department have worked closely with developers to mitigate such risks. So, too, does the Texas grid overseer, the Electric Reliability Council of Texas, which last November implemented a requirement that wind farm developers provide affidavits showing they engaged DOD officials before launching any new grid connection studies.

"The Department of Defense has an existing, well-functioning review process in place to make sure that energy projects and military bases can coexist," Tom Vinson, vice president of regulatory affairs for the American Wind Energy Association (AWEA), said in a statement responding to the GOP legislation.

Moreover, he said, the measure would "put buffer zones in place that do nothing to enhance national security." Instead, it would "put at risk tens of billions of dollars in private investment, and prohibit private citizens from leasing their land for wind development as they see fit."

Press officers at both DOD and FAA declined to comment on matters involving radar and military operations, citing the pending legislation.

As evidence of the low risk wind turbines pose to military bases, AWEA officials point to the Pentagon’s own record of research and decisionmaking on wind farms and mission compatibility, much of which is published online.

According to a March 2015 report from DOD’s Siting Clearinghouse, which compiles information on obstructions to military facilities, only one wind farm to date, proposed for a site near the Naval Air Station Patuxent River in Maryland, failed to implement satisfactory mitigation measures related to radar.

In that instance, Defense officials filed an objection to the project, effectively killing it.

But since 2010, at least 12 other wind farms have entered mitigation agreements with DOD covering a broad range of turbine siting and operational issues, with no known problems to military operations or the proper functioning of radar, according to available public documents.

In its latest report to Congress, covering calendar year 2014, the Pentagon determined "there were no unacceptable risks to DOD’s military readiness … from the loss of military training routes (MTRs) or special use airspace in the United States due to the construction of utility-scale energy projects reviewed by the [mission compatibility evaluation process]."

Yet such findings have not satisfied critics.

Manning, the squadron operations director at Sheppard, said concerns about wind farms interfering with pilot training and radar have been percolating for several years, both on and off the base. Since early 2016, Sheppard officials have participated in public meetings to raise questions and concerns about two wind farms proposed for sites near the facility.

Those projects, proposed by Horn Wind LLC, a developer based in Windthorst, Texas, would construct as many as 140 turbines at sites between 12 and 22 miles east of Sheppard, well within the radius of what Manning identified as critical airspace for both pilots and air traffic controllers. Horn Wind previously built wind farms at three other sites near Windthorst, at ranges of between 30 and 50 miles of Sheppard.

Calls and emails to the company’s president, Jimmy Horn, were not returned. Horn Wind notes on its website that its two proposed projects, near the towns of Petrolia and Bluegrove in nearby Clay County, would conform to all federal requirements.

"If the FAA review process identifies potential negative impacts to the Sheppard Air Force Base or to civilian air traffic, mitigation methods such as re-siting turbines, improving detection equipment or other could be employed to resolve impacts," the statement reads.

But Manning dismissed the idea of an agreement. "We don’t know of any mitigation that would work here at Sheppard," he said, adding that base commanders have "set a line on the ground at 25 miles. We don’t want anything closer than that."

Jeffrey Clark, executive director of the Wind Coalition, a Texas-based wind energy organization, said he has closely followed the military-airfield radar debate over the last several years. In his view, communities like Wichita Falls are being led to believe there’s a significant risk to radar from wind farms when there is not.

"In that community, before anybody saw where the turbines were going to go or any analysis was done on base impacts, you had a group of business owners and landowners who said, ‘Hell no, we don’t want a wind farm near us,’" Clark said.

Base commanders, too, have been swayed by anti-wind-power arguments, Clark added, often based on a false notion that wind turbines and military training are incompatible.

Clark said the same arguments have arisen in base communities across the country, often relying on the same set of claims about wind turbines interfering with aviation radar systems, weather radar, and even television and radio signals.

In South Texas, a wind farm being constructed near Naval Air Station Corpus Christi drew opposition from some base officials and community leaders who charged the turbines could interfere with radar signals and compromise Navy pilot training both at Corpus Christi and another air station at Kingsville, 50 miles away.

That issue was solved with a DOD-approved mitigation plan that calls for the wind farm’s operators to stop and lock the wind turbines whenever the Navy says it needs to reserve the airspace "for test, non-test, or emergency purposes." Moreover, the agreement makes clear that the Navy and the wind farm’s operators "will continue to work cooperatively to meet the desired goals of supporting military operations and readiness simultaneously with the production of renewable energy."

Kevin Chandler, a spokesman for Apex Clean Energy, which recently sold the Corpus Christi project to Enbridge Inc. but is still overseeing the wind farm’s construction, said Apex agreed to nearly $1 million in upgrades to the project to help mitigate impacts identified by the Navy, adding that "we are confident they will prove effective and help to strengthen the base’s operations."

A similar story has played out in North Carolina.

Lawmakers there recently alleged the state’s first wind energy project in Perquimans and Pasquotank counties could interfere with a "relocatable over-the-horizon radar," or ROTHR, operated from the Navy’s nearby Hampton Roads complex in Virginia, even though the facility entered a mitigation agreement with DOD to ensure the wind turbines would not interfere with the ROTHR system (Climatewire, Jan. 18).

Nevertheless, in an early January letter to the Trump administration’s then-incoming Secretary of Homeland Security, Gen. John Kelly, the North Carolina lawmakers dismissed the mitigation plan as a product of DOD officials trying to comply with the Obama administration’s "unscientific and nonsensical" adherence to an "all of the above" energy strategy.

Yet in only the last two weeks, as the Amazon Wind Farm U.S. East project neared its first delivery of commercial power, some of those same lawmakers revised their position. In a statement, North Carolina House Speaker Tim Moore (R) indicated that recently obtained information suggested that concerns raised by the military about radar interference had in fact been addressed.

But it remains to be seen whether positions will similarly shift in Texas, where Sheppard officials continue to raise red flags over the prospect of new wind farms in the base’s neighboring communities.

"We’re not anti-green energy," Manning said. "We’re just here to protect the mission and to protect pilot safety, not just for the military but for general aviation. It’s about safety and making sure we can do the mission."