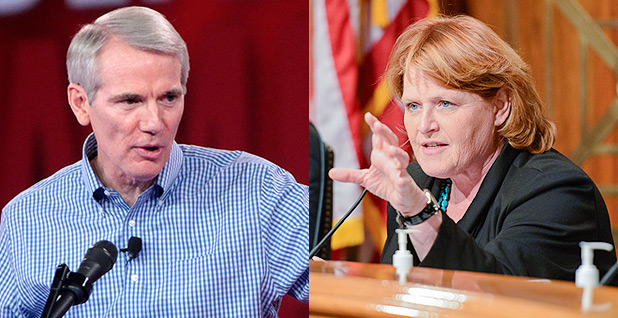 The Senate Homeland Security and Governmental Affairs Committee plans to vote today on a measure that would change the federal rulemaking process.

The "Regulatory Accountability Act," S. 951, would tweak the Administrative Procedure Act of 1946 with the aim of producing "smart" rules that reduce burdens on businesses while protecting public health and the environment.

While rulemaking change may not stir up many people, it’s a big deal — and personal — for the bill’s sponsors.

Sen. Rob Portman (R-Ohio), who first introduced a version of the bill in 2011, recalls sitting at the dinner table listening to his parents discuss taxes and regulations. His father worked as a forklift distributor, his mother was the bookkeeper.

"My family background is not in politics," he said in a recent interview. "Our dinner conversation was not politics but the difficulty of borrowing money and the things that small-business people worry about."

As a lawyer in the 1980s, Portman said he often represented small businesses that struggled with regulations. He said some of the rules, like new environmental ones, were "perfectly appropriate" — others, he said, incurred unnecessary compliance costs.

For Sen. Heidi Heitkamp (D-N.D.), her introduction to the importance of regulations was through environmental degradation.

"Back in the day, you couldn’t eat fish out of the Great Lakes," she told E&E News. "Rivers were starting on fire. When I was your age, you couldn’t see in LA, the smog was so bad. You could not drink out of most of the navigable waters in this country."

The lawmaker grew up in North Dakota, where her father was a truck driver and her mother worked as a school cook and janitor. The fourth of seven children, Heitkamp learned about Washington as an intern in 1976, working for the Environmental Study Conference that provided staff support to congressional offices on environmental issues.

"This was back when there wasn’t a split on the environment," she said. "At the time I was here, they were looking at reauthorization of the Clean Air Act, the Clean Water Act and the Surface Mining [Control and] Reclamation Act. I worked on all these of those projects as an intern."

Heitkamp specialized in environmental law at Lewis & Clark Law School and served as an attorney for U.S. EPA for a time. She said that through her experience, she’s learned environmental regulations are highly technical, noting that the bedrock environmental laws were enacted early and reauthorized with major changes some years later.

"You don’t always get it right the first time," she said. "We need to have a discussion about what’s the right level of regulation. If you ask the people in North Dakota, whether they’re in business or in farming, most of them will say this is an area that needs attention."

When Portman was representing the eastern half of Cincinnati in the House, he said he visited a mill that cut the hard wood off green logs to make veneer. The business was struggling due to an Occupational Safety and Health Administration rule that requires all sawmills to install a shavings-collection system to prevent combustion.

"But these were green logs, so there wasn’t a big issue of combustion because they were green," Portman said.

"I remember saying to this guy, ‘Well you’ve got this sawmill and that sawmill, are you going to expand?’ And he said, ‘Actually we’re going to shut one down because there are these new regulations. Look at this floor, Rob, we cannot keep this floor clean. They’re requiring us to immediately vacuum up everything that comes off these saws, and there’s no way we can do that and keep the business going.’"

Heitkamp has similar stories. She said when industry was redesigning the hazardous and flammable material tank car standards, it wanted the Department of Transportation to weigh in, but it didn’t.

"And at the end, the new regulation in tank car design requires retrofits on tank cars that had just rolled off the manufacturing. That’s just wasted money," she said. "So I remind people all the time, look, not regulating frequently causes as many problems are overregulating."

Portman said he too believes regulations are important.

"You need to have them, but they should be smarter," he said.

The bill would direct agencies to find the most "cost-effective" regulatory option and make law the common practice of conducting cost-benefit analyses.

It would also invite early participation by regulated entities. And it would build in a review process for new rules and allow for agency hearings on the most costly actions.

The measure is significantly different from the House version, H.R. 5, which passed early this year. Portman’s office has compiled a list of key differences.

Portman said he was drawn to work on the measure given his experience. He formerly served as White House Office of Management and Budget director and oversaw regulatory matters.

"So it was a natural thing for me to get into the ‘RAA,’ and I’ve always been attracted to legislation that can get done," he said.

Heitkamp said, in part, she took on the bill as an assignment as ranking member on the regulatory subcommittee.

"It’s not like I didn’t ask for the committee," she said. "But once you’re on the committee you have a responsibility to take up all issues that come, and so that’s part of my job."

She also said regulatory matters are a "very high-priority issue" for North Dakotans, "and they want someone who’s paying attention."

The senators and their staff negotiated the bill for five months before landing on a compromise.

Neely specifically pointed to a number of provisions promoted by Heitkamp, including a "prospective-retrospective review," which would require agencies to embed a review date for every new rule.

"That’s gotten a lot of good attention," Neely said. "It’s a smart thing we can all agree on that these huge regulations need an automatic look back. If they’re costing the economy $100 million or more a year, you should check and make sure it’s working."

She said the bill had previously directed agencies to choose the "least costly alternative" rule, but Heitkamp negotiated to change the language to most "cost-effective."

While preferable to "least costly" for opponents of the measure, the term "cost-effective" has still caused environmental and public health groups to worry too much emphasis would be placed on cost, as opposed to rule benefits.

"The RAA would tilt the country’s rulemaking process strongly in favor of special interests — and against anyone who thinks a new standard is needed to protect the public," the Natural Resources Defense Council said in a statement.

Portman said, however, the measure is designed to achieve environmental protection without compromising jobs and economic growth.

"I’m pretty simple-minded about it," he said. "We went back and forth on language, but you could also use the word ‘efficient’ — that a rule is meeting the objective without causing unnecessary costs and burdens."

Neely added that the bill includes flexibility for agencies. If an agency determines there is a good reason to choose a rule that is not as cost-effective as another alternative, the agency can choose to offer a reasonable explanation and choose the costlier rule.

"This is a middle-ground bill. It gives the agencies considerable discretion and flexibility," Portman said. "And that’s a good thing to have."

Heitkamp said that while she values weighing the costs of compliance for rules, she draws the line at health safety.

For example, EPA is charged with setting standards for ozone and other pollutants every five years under the Clean Air Act. In 2001, the Supreme Court barred the agency from considering compliance costs in setting ambient air standards in Whitman v. American Trucking Associations Inc. Under the "savings clause" provision, the Senate "Regulatory Accountability Act" would not override that ban.

The measure would also require agencies to consult those likely to be affected by regulations before beginning work on a rule.

The idea is, Neely said, for agencies to identify a problem that needs to be resolved and ask community members for thoughts on how to solve that problem.

"Do we need to eliminate a regulation? Does Congress need to do something? Should state localities handle this? Or should we write a rule?" she said. "And if we write a rule, how should we go about doing that? And that gives folks early opportunity to offer their ideas before anything gets baked in."

While the extra step is likely to add time to the regulatory process, both Portman and Heitkamp said it will save time on the back end by reducing litigation.

"The greatest example of that is Waters of the United States," Heitkamp said, referring to the contentious Obama administration rule aimed at clarifying what waterways and wetlands get automatic federal Clean Water Act protection. "If you look at Waters, we’ve been in and out of litigation for 30 years on what’s jurisdictional waters for EPA."

Despite the savings clause, environmental and public health groups — including the American Lung Association, Center for Progressive Reform and Union for Concerned Scientists — oppose the measure. And the League of Conservation Voters yesterday urged senators to vote down the measure.

"The RAA would add massive analytical burdens to the already lengthy process that agencies go through for developing new safeguards and regulations," the group said in a statement.

"It would also create endless opportunities to slow the regulatory process through legal challenges, shifting the balance of power to deep-pocketed corporate interests who oppose new safeguards."

The U.S. Chamber of Commerce is pushing hard for the bill. Neil Bradley, senior vice president and chief policy officer at the chamber, sent a letter to the committee urging its support.

"S. 951 is a balanced approach to reforming and updating the Administrative Procedure Act," he wrote.

"The Chamber believes that federal regulations should be narrowly tailored, be supported by strong and credible data and evidence, and impose the least burden possible, while implementing congressional intent," Bradley said.

John Graham, who headed the Office of Information and Regulatory Affairs during the George W. Bush administration, said he believes the bill has a chance.

"As long as the legislation is seen as a congressional initiative, rather than a Trump administration initiative, I think substantial bipartisan support in the Senate is likely," he said in an email.

While the proposal would add process points for promulgating new rules, it would also require the same steps for repealing rules, a priority under the Trump administration. Portman said he has not officially attempted to garner White House support for the measure.

"I’ve talked to a few people over that way," Neely said, "and they haven’t seemed to be concerned about it. They certainly are not saying, ‘Oh don’t do this because it’s going to hurt our efforts.’"

Still, Senate Minority Leader Chuck Schumer (D-N.Y.) is unlikely to encourage rank-and-file Democrats to vote for the measure, and Heitkamp herself is uncertain.

"At this point, I predict, that if it takes 60 votes, we aren’t going to get it over the finish line, unless we have additional discussions on [cost-benefit analysis]," she said.