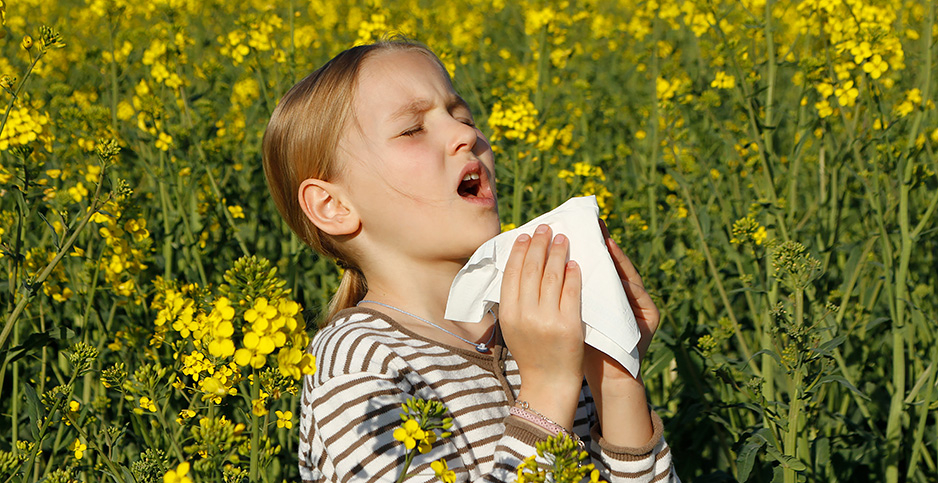 Spring is in the air, and so is pollen — bringing with it itchy eyes, runny noses and increased asthma symptoms.

While blooming cherry trees and dogwoods signal warm temperatures and pleasant weather, they can also mean months of misery for those suffering from seasonal allergies.

What’s more, thanks to climate change, pollen seasons are starting earlier and lasting longer. So are allergy symptoms.

"It’s pretty obvious that I’m going to see more patients when things start blooming," said University of Maryland head of general and developmental pediatrics Dr. Adam Spanier. "With things blooming sooner and the blooming seasons being longer, that correlates to what we see in our office — kids are coming in with asthma symptoms and allergy symptoms earlier in the spring, and even in the winter, than we might have seen previously."

Spanier’s anecdotal observations are backed up by research.

A study published in Proceedings of the National Academy of Sciences this winter found that human-caused climate change is affecting respiratory health, including asthma and allergies, due to lengthening and more severe pollen seasons.

The study measured pollen trends across North America over the past 30 years and found that pollen concentrations have increased over time, while pollen seasons are getting longer.

Now, pollen season is starting roughly 20 days earlier than it did in the 1990s and lasting 10 days longer, with the amount of pollen in the air increasing by 20%. The increases were larger in the Southeast and Texas than in the Northeast.

"When pollen seasons are really bad, it makes us more vulnerable to them," said William Anderegg, an author of the study, who said he first became interested in studying climate change’s impact on allergies because "I experience pretty bad pollen-driven allergies every year."

While most people might experience mild allergy symptoms like itchy eyes or runny noses, increased pollen concentrations and longer pollen seasons can have serious consequences.

A 2016 study published in the Journal of Health Economics showed that students score lower on standardized tests taken during the height of pollen season, and research published last year in the journal Allergy found that pollen inhibits the body’s ability to respond to respiratory illnesses.

“Pollen is an exacerbator of asthma, so if you are someone living with the disease, pollen can worsen it and put you in the hospital.”

Pollen can also be particularly concerning for those suffering from asthma, said Amir Sapkota, a professor at the University of Maryland School of Public Health.

"Pollen is an exacerbator of asthma, so if you are someone living with the disease, pollen can worsen it and put you in the hospital," he said.

His research has suggested that early starts to pollen season can worsen asthma symptoms, with one study of nearly 30,000 patients, published last year in JAMA Open Network, finding that the early onset of spring was associated with a 17% increase in hospital admissions for asthma.

Those findings dovetail with a 2019 analysis in the journal GeoHealth that compared health costs of different climate-related events in 2012. It found that increased pollen levels in North Carolina alone cost $43 million. Increased oak pollen in the state that year led to 1,149 asthma emergency room visits, 183 hospital visits and four deaths.

Though those numbers pale in comparison to the effects of Superstorm Sandy in 2012, which the same analysis found cost $3.1 billion in New Jersey and New York and led to 273 deaths, Sapkota says pollen’s impact should not be ignored.

Nearly 9% of the U.S. population suffers from asthma, which can be worsened by longer pollen seasons.

"That’s a lot of people. It’s not like a hurricane that is only focused in one area," he said. "You may not have as many dead bodies in the street from pollen as other climate impacts; this is more subtle. But when you add up everyone in the U.S. who suffers from asthma, it can have a substantial impact, particularly in the burden of increased health care costs."