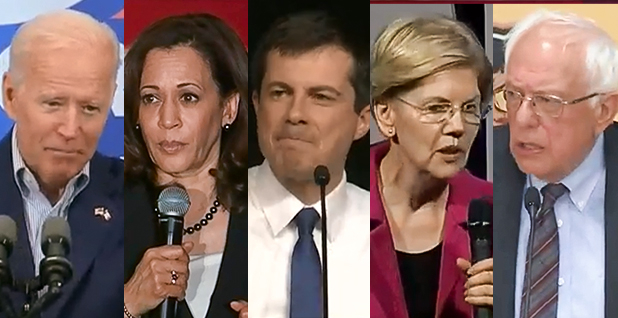 The events come after months of advocacy by environmental groups such as the League of Conservation Voters, the Sierra Club and 350 Action for climate change to get top billing in the party’s debates, either through a forum dedicated to the topic or through questions at other events.

"There isn’t really a case that this shouldn’t be prominently featured in the debates," Pete Maysmith, LCV’s senior vice president for campaigns, told E&E News.

"The voters are demanding a conversation about how we’re going to tackle the climate crisis."

For green groups, it’s part of a bigger strategy aimed at ensuring the party’s eventual nominee presents a clear climate contrast to Trump, with aggressive and serious plans to fight global warming.

"It’s a bold plan that matches what the science demands of us to solve climate change. And it is the sense of urgency and, critically, prioritization," Maysmith said.

DNC Chairman Tom Perez rejected the request this month, arguing it would favor one candidate over others, but promised he’d press debate moderators to make climate a priority.

"Beginning in 2017, I made clear to our media partners that the issue of climate change must be featured prominently in our debates. That didn’t happen in 2016 — and it was wrong," he said in a Medium post.

The Environmental Defense Fund’s affiliate EDF Action said it’s putting nearly $90,000 toward an advertising campaign centered around the debates, including billboards, transit ads and digital ads calling for 100% clean energy, in both English and Spanish.