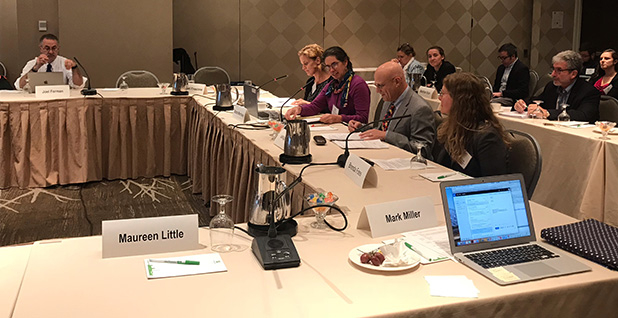 EPA advisers accused the agency of neglecting experts and failing to properly protect children this week as top officials rushed to affirm their dedication to kids’ health.

A committee tasked with advising EPA about children’s health convened in Washington this week, shortly after the agency unexpectedly placed the head of its Office of Children’s Health Protection on leave. EPA has released few details on the decision, saying only that Ruth Etzel, a longtime public health expert who joined EPA in 2015, was put on leave while the agency reviews "allegations" about her leadership of the office.

At the meeting, which was on the books before the uproar over the children’s health office began, committee members said yesterday that they’ve been frustrated by the Trump administration’s regulatory rollbacks and inaction on climate change — both of which, they said, would harm kids.

"This should be keeping you up at night," said Maeve Howett, assistant dean for nursing and education at the University of Massachusetts, Amherst, and a member of the EPA advisory panel.

Howett slammed EPA’s recent decision declining to update national air pollution standards for nitrogen dioxide, saying the move ignored the impact of climate change on kids. While not a greenhouse gas itself, nitrogen dioxide is important to the creation of tropospheric ozone, which is one.

"When you see this aggregate of greenhouse gases and current storms, all of that impacts children’s health, the suggestion of just retaining standards is really inadequate when you are talking about children’s health protection," she said.

She asked Clint Woods, deputy assistant administrator of EPA’s Office of Air and Radiation, whether he had read the dire climate change report released by the U.N. Intergovernmental Panel on Climate Change earlier this week.

He hadn’t. "The president hasn’t read it yet either," he replied.

Riffing off a phrase Pruitt used frequently, Neltner said, "When I hear this brings us ‘back to basics,’ I get worried it’s going back to a time before we had the Office of Children’s Health Protection."

"Please don’t view that memo as replacing the importance and central role of children’s health and potentially susceptible populations," he said.

Committee members also criticized the Trump administration for asking for their input on policies only once in the past two years. That’s a decrease from previous administrations, which generally asked for advice twice a year.

In particular, Joel Forman, an associate professor of pediatrics at Mount Sinai Hospital, told acting EPA Deputy Administrator Henry Darwin that the committee should have been asked to weigh in on agency plans to revisit Obama-era Mercury and Air Toxics Standards.

"That’s what we are here to do. If there’s really a commitment to children’s environmental health, we should be asked," Forman said.

"We are ready and willing to assist you, so feel free to put us to work," added committee Chairwoman Barbara Morrissey, who works for the Washington State Department of Health.

Darwin said he was unaware that the committee can only officially weigh in on proposed rulemakings after being asked by the EPA administrator.

‘Very much in the dark’

The flurry of criticism that followed Etzel’s removal from office last month has put EPA in damage control mode, with agency leaders publicly emphasizing their dedication to the issue (Greenwire, Oct. 11).

Acting Administrator Andrew Wheeler signed a memo yesterday "reaffirming" EPA’s commitment to kids’ health and the office at the center of the firestorm.

"The EPA Office of Children’s Health Protection plays an essential leadership role in protecting children through engagement on key children’s health issues," the memo says. "OCHP will continue to work with internal and external stakeholders in risk communications and training, as well as scientific and policy analyses."

The new acting leader of that office, Michael Firestone, told the advisory committee he asked Wheeler to issue the memo after an event celebrating Children’s Health Day last week where reporters asked questions about Etzel’s status. The children’s health office’s staff drafted a memo, and "that was pretty much what the administrator signed," Firestone said. He added that he knew the document might not immediately assuage concerns.

"Of course, there’s just having the memo there and then you will all watch the actions at EPA," he said.

Advisory committee members themselves did not mention Etzel at the meeting, but other children’s health experts brought up her absence during a public comment period.

Jerome Paulson, a pediatrics and environment and occupational health professor at George Washington University, said the agency needed to explain its decision.

"It has been over two weeks, and we are all left very much in the dark," Paulson said. "I think that the statement in the memo put out today is very nice, but even as Dr. Firestone mentions, we will have to see whether actions accompany the words."

Elizabeth Brandt of the advocacy group Moms Clean Air Force agreed, saying she was particularly concerned that Etzel’s status would result in the EPA children’s health office having less input in regulatory decisions like the mercury standards.

"The timing is very suspicious to us," she said. "It’s nice that we got a memo to say that children’s health is important, but to me, as a mom, that’s like my 5-year-old saying she’s going to clean her room. I want to see it happen."