After 2 years in jail, Ryan Bundy speaks out 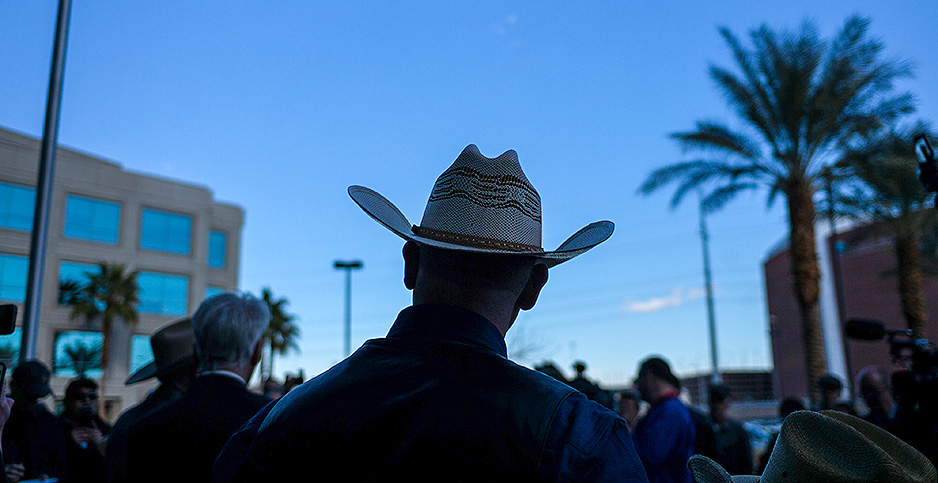 After spending the last two years in federal detention, Bundy’s fervor for less regulation and his distaste for agencies’ land management has only grown. He was detained following the 2016 occupation of the Malheur National Wildlife Refuge in Oregon and a 2014 showdown with the Bureau of Land Management near Bunkerville, Nev., but federal prosecutors could not secure convictions against him in either case.

"I just want government to do what I’ve told them to do," said Bundy, who now lives in Mesquite and works primarily on his family’s ranch in nearby Bunkerville. "I’m not out for a revolution, but change definitely needs to happen."

Bundy, whose face sags due to nerve damage caused by injuries from being run over by a car at age 7, recently sat for an hourlong interview with E&E News on topics ranging from his recent criminal trial in Las Vegas to his views on the nearby Gold Butte National Monument.

He did not shy from the prospect of future protests over what he sees as government overreach or even a run for political office, but he stressed that he is not seeking out conflict.

"I don’t want to overturn government because I want power," Bundy said. "I just want to live and be left alone."

A federal judge last month dismissed the indictment against Bundy, his brother Ammon and father Cliven after finding that prosecutors had withheld evidence from the Nevada standoff.

The 45 year old gestured to one of his daughters, a blond tot who greeted a visitor by joining a few of her siblings in a jubilant rendition of the "Batman" theme song, and asserted that he just wants to live his life "in peace."

Excerpts from the interview:

Federal prosecutors have asked Chief U.S. District Judge Gloria Navarro to reverse her ruling that dismissed the criminal indictment against you and that prohibits a new trial over the 2014 standoff with BLM. How concerned are you that prosecutors will succeed?

All I can say is that if they do in fact gain precedence with or favor with the judge and reopen this case, it will only further their embarrassment for they will be further exposed in their lies and manipulations. They’ve been caught red-handed in criminal activity themselves. The entire indictment against us is a lie. The entire indictment: They’ve used false testimony, they’ve manipulated their witnesses, they’ve manipulated the evidence, they’ve withheld evidence, they’ve extorted. They have, the government and their agents, have committed all the crimes. We have not.

The further this goes the further it will be exposed, and so if they want to be further embarrassed then I guess they can keep pressing forward.

How do you fix what you see as a corrupt government system? Do you run for office? Do you hold more protests?

And it needs to be corrected. There’s many men who are being wrongfully convicted by this government.

How do you go about doing that if it’s up to the citizens but they’re not going through their elected officials, whether it’s local, state or federal?

‘The people are in authority’: An interview with Ryan Bundy

Audio editing and production by Chris Farmer and Katie Howell.

Well, a redress is a method to correct, to fix. A grievance of course is a trouble, something that’s causing us grief. That’s what was going on in Oregon. We built a redress of grievance and presented that to the elected officials there in Oregon concerning the [father-and-son ranchers Dwight and Steve] Hammonds and their unjust imprisonment and incarceration that they were being forced into. The unjust judgment that was made against them. …

And are we as American people, are we just to let that happen? And to let the Hammonds suffer at the hands of tyranny? All of America should be in uprising and demanding by whatever means necessary to prevent that from happening. And it grieves me that they’re still there.

It grieves me that the American people just go on with their daily lives and allow it to take place. What’s wrong with us?

Earlier this month, you filed a civil lawsuit against the federal government. The suit seeks restitution for passengers in the vehicle when law enforcement officials shot and killed Robert "LaVoy" Finicum in Oregon in 2016. But now you’ve asked to withdraw that complaint, arguing you can’t get a fair trial in front of a federal jury. What happens next?

I’m pursuing it elsewhere. I’m turning it over to a common law grand jury to bring those who have done atrocities to some accountability. … Common law is the basis for all our laws, and it is the strongest jurisdiction. It’s stronger than the admiralty courts, which are what we’re being subjected to now. There’s a process there, and I’m still learning myself about it.

Well, the federal government definitely has a role and that role is outlined in the Constitution.

The central government’s, the federal government, main duties and responsibilities are with external objects: to deal with the outside, other countries, to deal with foreign relations, to protect our borders. They have very, very little authority or control internally according to the Constitution, according to our founding fathers.

And so am I anti-government? Absolutely not. I simply want the government to do what they’ve been authorized to do through and by the Constitution of the United States and nothing else. …

How do you feel the Trump administration has been doing with regard to land management, and in particular Gold Butte National Monument?

Is the Trump administration going in the right direction or are the steps they are making too small?

Well, let’s see: If I stole your house and I said, "Well, I feel bad about stealing your house. I’ll give you half of it back." Would you feel good about that? No you wouldn’t. Shrinking back is just a mockery. It’s not law. It’s not constitutional. If something was wrong from the get-go, it’s wrong all the way. An entire matter fails on its first fault and defect.

What is a monument? Well a gravestone is a monument. A large monument might be the Statue of Liberty, but it’s an item. And if it’s an age of historical value, then it has antiquity value that is deserving of protection to keep it from destruction. I can agree with that, but the Antiquities Act is not for large tracts of land. In fact, the very verbiage in the Antiquities Act states that the least amount of land necessary to protect the item of antiquity can be included with the monument for that protection.

But what about places like the Grand Canyon, which President Roosevelt declared a monument?

So in other words they’re not protecting it. They actually causing them more harm. Just like the land here in, that they’re wanting to create this Gold Butte National Monument. Well, Gold Butte has been there since the existence of time. The rock formations have been there for thousands of years, the petroglyphs on them have been there for hundreds, maybe thousands of years, I don’t know. But they’re still there. They’re still going to be there. …

Furthermore, our activities there have never done it harm. And there is no conflict. That’s what interesting to me. This cattle grazing is not in conflict with the public’s right and ability to come and to use and to enjoy this land. Nor is it in conflict with the desert tortoise. There’s absolutely zero scientific proof that cattle do any harm to tortoise.

BLM hasn’t said whether they intend to impound your family’s cattle again. Having gone through the experience that you’ve had now, would you still protest that action if they tried to do it again, knowing what might happen?

BLM is an illegitimate organization, they’re unconstitutional, I won’t speak with them.

What are your plans for the future? What do you see looking ahead?

I’ll speak as I’m asked to speak. But I intend to build up the ranch, to improve it. To improve my waters, to improve my corrals, to increase my herd of cattle. … And to go about peaceably, and honestly making a living for my family. That’s all I wanted. But these atrocities that the government do need to be stopped. And I do not know how to go about that. Government is supposed to be a benefit to the people not a detriment. But it’s been a detriment to many thousands of people.

This interview has been edited and condensed for brevity and clarity.