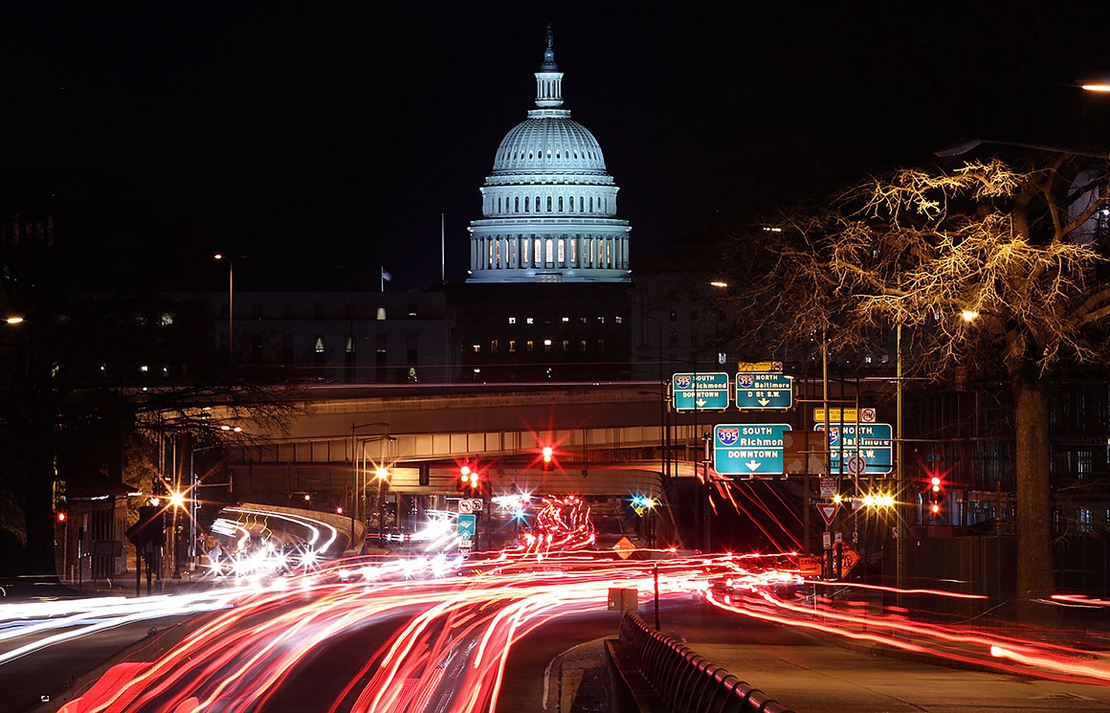 Traffic zips by the U.S. Capitol. EPA is expected to soon release its plan for new regulations on tailpipe emissions. Mark Wilson/Getty Images

Hours after being sworn in as president, Joe Biden gave EPA and the Transportation Department a July 2021 deadline to undo a Trump administration rule that gutted the clean car standards Biden helped craft as vice president.

The agencies are not expected to meet this week’s deadline, and questions are swirling about the scope of a cars rule that could play a central role in cutting emissions from the nation’s biggest source of CO2.

“Is the proposal going to reinstate the Obama standards, is it going to embody the agreement California reached with auto companies, which was less stringent, or will it be somewhere in between?” said Richard Revesz, a professor at the New York University School of Law.

While climate experts and advocates are pushing the administration to revive or surpass the tougher regulations imposed by President Obama, automakers are pitching a more industry-friendly agreement reached last year with California.

The final contours of the forthcoming rule, which would cover passenger vehicles through model year 2026, could test the president’s commitment to using aggressive regulations opposed by industry to reduce emissions. The transportation sector accounts for 28% of the nation’s carbon pollution.

Fuel economy standards are jointly set by EPA and the National Highway Traffic Safety Administration, a division of the Department of Transportation. EPA sent its proposed rule to the White House for review last month, but NHTSA didn’t submit its draft until last week, making a July release unlikely, multiple sources said.

“If it’s [released] a few days into August, I don’t think anyone is going to panic,” said Dan Becker, a transportation expert at the Center for Biological Diversity. “The real deadline is the end of the year.”

EPA must issue a final rule by the end of the year in order to apply the standards to model year 2023 vehicles.

If EPA misses that deadline, Becker said, “it means one more year of Trump regulations that require no improvements” in fuel efficiency.

When President Obama introduced the first clean car standards in 2009, they were the most significant climate rules ever established in the country, requiring the average fuel economy of new vehicles to increase 5% each year, until they reached 51 mpg by 2025.

President Trump relaxed the requirement to a 1.5% annual increase in fuel economy, which would result in 40.5 mpg by model year 2026. He also blocked California from setting its own tougher tailpipe emissions rules.

Margo Oge, the former head of EPA’s transportation office under the Obama and Clinton administrations, said she expects the forthcoming proposal to be a compromise.

“My expectation is we will see something in between the Obama and California programs,” she said. “It will be more stringent than the California agreement, but less than the Obama standards.”

“The fear we have is they will dress it up to look like the Obama standard, but it will be a Swiss cheese rule riddled with loopholes that industry has asked for and that will not protect the climate,” he said.

For example, the California deal does not require automakers to account for upstream emissions from power plants that charge electric vehicles.

“There’s going to be a significant number of electric vehicles on the road, and not counting the upstream emissions is really going to add up,” Becker said.

“I’m sure there will be, and there should be, standards that will go way beyond the Obama ones,” he said. “In terms of meeting the president’s goals and the commitment that were made as part of the Paris climate agreement, sufficiently strict standards following 2026 should be able to do that job.”

Some experts, on the other hand, say failing to reinstate the Obama rules now could cause problems down the line.

“You’re basically just kicking the can down the road,” said Dave Cooke, a senior vehicles analyst at the Union of Concerned Scientists. “The best way to get to a zero-emissions fleet is to set a strict rule now. If you wait around to do that it becomes harder and harder to make that transition.”

The American Council for an Energy-Efficient Economy released a report yesterday that argued the tailpipe standard would need to surpass the Obama-era rule in order to counter the efficiency losses under President Trump. The group’s modeling found that the fuel economy of new vehicles must hit 55 mpg by 2026 to bridge the emissions gap.

But auto manufacturers argue that the standards under the California deal are the best way to protect jobs, help consumers and protect the environment.

“Our goal is to work collaboratively with the administration to achieve greater environmental improvements than current requirements, sooner, while providing benefits for consumers, creating opportunities for job creation, and strengthening our nation’s economy,” John Bozzella, president and CEO of the Alliance for Automotive Innovation, said in a statement advocating for the compromise agreement.

Automakers are casting the approach as a peaceful compromise after years of legal battles under Trump. But some advocates see it as an attempt by industry to continue the looser requirements established by the previous administration.

“That’s the dilemma facing Mr. Biden,” Becker said. “And the climate hangs in the balance.”