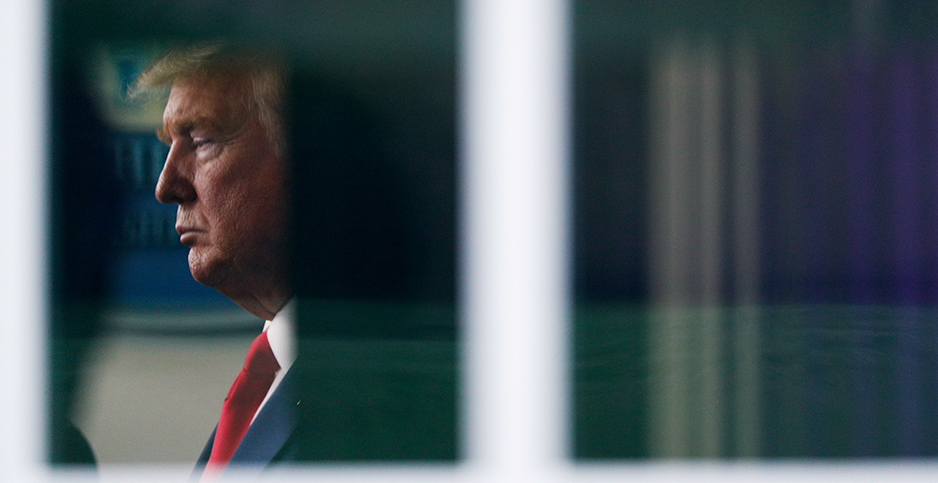 President Trump is disrupting the transition process at EPA and other agencies that oversee environmental policies. Tom Brenner/Reuters/Newscom

The Trump administration is ending where it began, with a truncated transition process that affords the incoming president limited time to plan.

Biden has stocked all of his transition teams with veterans of the agencies they’ll work with, and their expertise might make up for lost weeks of staff briefings and document review that typically occupy an administration-in-waiting between the election and inauguration.

"These are very experienced people who are very comfortable and know exactly how things operate," Myron Ebell, Trump’s EPA transition lead in 2016, said of the 12-member team Biden has sent to that agency. "I don’t think it will slow them down very much."

Biden maintains that Trump’s refusal to accept the results of the Nov. 3 election won’t deter his transition teams.

"We’re well on our way," he said at a press appearance after the election’s result was announced.

But the fact that Trump’s General Services Administration hasn’t given the green light for the formal transition to begin deprives his team not only of funds, but of practical support like the briefing materials that career staff members have spent months preparing. Also missing is the State Department’s assistance in setting up diplomatic channels with foreign counterparts and official government email addresses for Biden staff.

Barred from entering agency buildings — except for a small preelection office at the Commerce Department — Biden’s agency review teams must rely on public information and their own knowledge.

"They have one hand tied behind their back," said one prominent member of the Obama transition team, who said personnel matters would present a particular challenge.

EPA and the State Department bled career staff during the Trump years, particularly among officials who work on climate change. The Trump administration moved the headquarters of the Bureau of Land Management to Colorado, and the Biden team is eyeing moving it back.

All of that will take extensive planning, and that’s what the 11 weeks between Nov. 3 and Jan. 20 are typically used for. But Trump and his closest aides are throwing up obstacles.

Ebell remembers an "all hands on deck" meeting immediately after Trump was elected in which word came down from campaign headquarters in New York City that the transition’s "landing teams" — a naval term invented, he said, by operations director and former nuclear submarine officer Ron Nicol — would be "revetted."

The aim was to weed out loyalists to then-New Jersey Gov. Chris Christie (R), who had been sacked as Trump’s transition team head. His plan for the transition was dumped into the garbage by Trump adviser Steve Bannon.

"That would have been OK if they had put sufficient attention and resources to it to do it fairly quickly," said Ebell of the revetting.

Instead, it took weeks.

"We were essentially in stasis from then until the first week of December," he said, referring to the EPA team. Some agencies didn’t get transition staff until later than that.

When the Trump teams did arrive at their respective agencies, former senior career officials who interacted with them say, they seemed disengaged and incurious about important work underway at the agencies, like the status of negotiations, deadlines for regulations and the myriad other pieces of information career civil servants had spent months compiling for their review.

Michael Flynn, who was then EPA’s associate deputy administrator, said his perception was that the materials the agency handed off were never read.

"They had their minds made up about what they wanted to do," he said of the EPA transition team led by Ebell. "It was nice that we had this information; ‘Thank you, but we’re proceeding in this direction.’"

The transition held an initial round of briefings with a few EPA offices — and then nothing.

"There wasn’t extensive digging into the information," said Flynn.

Ebell said the team did review the materials provided by career staff. He remembers the Obama political appointees being polite and professional, but he said the agency career staff seemed hostile and resistant to the Trump agenda.

"I think in some cases, we felt that it wasn’t very productive [to meet with them] because they were not forthcoming, or in some cases, they just weren’t telling us the truth," Ebell said, declining to give examples.

Flynn, who started at EPA in the 1980s and served as acting deputy administrator before retiring in 2018, said career staff members are accustomed to policies changing when a new administration comes in.

"The significant difference here was the fact that it was very clear that the incoming administration was planning to push back on the direction of EPA’s basic mission of protecting human health and the environment," he said.

Ebell said his marching orders from the Trump transition team were that the president wanted EPA to stop "regulating people’s lives and diminishing economic activity."

"Of all the transition teams, ours was the most countercultural in terms of the Washington establishment," said Ebell, noting that the team was "light on lawyers" and lobbyists, "because they’re the problem at EPA."

Ebell had no experience working inside the federal government. The only EPA alumnus was David Schnare, a former career EPA lawyer who had become a vocal critic of the agency after retiring from it.

That contrasts to Biden’s team, which is mostly composed of former senior EPA officials, some of whom are lawyers.

But Ebell said his EPA landing team’s composition had no hand in what would become the Trump EPA’s relatively dismal record of defending early regulatory actions in court. For one thing, Trump’s first EPA administrator, Scott Pruitt, was himself a lawyer — the former attorney general of Oklahoma.

Ultimately, Ebell said his team managed to make up for the three-week delay and leave Pruitt a road map for the early days of his administration. But he thinks the administrator largely ignored it.

"Pruitt was not really ready for D.C.," said Ebell of the administrator, who resigned in 2018. "I think if there’d been more vetting by the D.C. end than the New York end, that would have become apparent."

Ebell said Trump’s family and inner circle of advisers in Manhattan overrode and sidelined the D.C.-based personnel operation under Bill Hagerty. "I think that initiated the problems that plagued the first couple years of the Trump administration," he said.

He singled out Trump’s first secretary of State, Rex Tillerson, as one such "disaster" of New York’s making.

"We prepared like crazy," said Reifsnyder. "You’re there to provide them information, give them background, get them up to speed, because, after all, these are going to be your bosses, many of them. You want to make sure that they’re able to function."

Reifsnyder, who started at the State Department in 1984, said most transition teams were eager to learn. Not so the Trump team, members of whom continued to trickle into the department through January.

"We never knew what titles these people had," he said. "They just appeared. They were sort of to be feared, but you didn’t know what their role was, and they never told you."

He did remember briefing one of those officials on the Green Climate Fund, a U.N. program to support adaptation and mitigation in poor countries to which the United States had pledged $3 billion under President Obama.

"He didn’t know very much, but what he did know he was dead set against," he said. The United States never paid the $2 billion balance on its pledge.

Still, Reifsnyder, who departed from State after Trump’s 2017 Rose Garden speech announcing plans to leave the Paris Agreement, compared the Trump administration’s oversight of the work being done at the State Department to the Eye of Sauron from "The Lord of the Rings."

"If it was focused on you, you were in deep kimchi, because it is very intense," he said. "But it’s also very narrow, and it sort of moves around."

The eye was always on the State Department’s climate work, he said, but work on other topics like biodiversity or ozone emissions continued much as it had before.

Reifsnyder predicted that the Trump’s political appointees won’t ultimately stand in the way of the Biden transition team and its efforts to meet with career staff.

"Each day, people are going to become a little less frightened, a little more emboldened," he said. "It will get easier for the transition team with each passing day, because their legitimacy will be sort of cemented and confirmed the closer we get to Jan. 20."