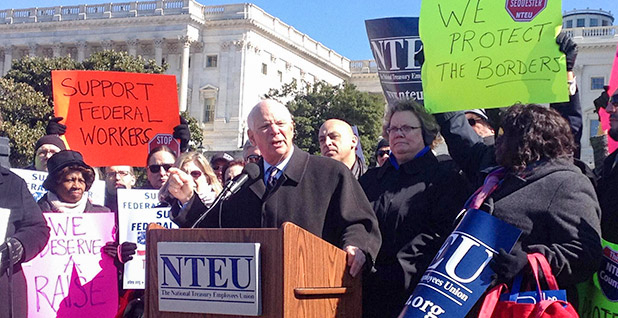 EPA’s management has opened up negotiations with several of its employee unions amid concern from labor officials over potential new restrictions on telework.

The talks come after EPA leadership earlier this summer imposed a contract on its largest union — American Federation of Government Employees Council 238, which represents the majority of the agency’s workforce, at about 8,000 employees. The contract limited telework, restricted grounds for submitting grievances, barred union use of agency office space, and curbed "official time," paid work hours used for union business.

Emails, memos and other records obtained by E&E News show that EPA has taken a tough line with its other unions, pushing for quick talks and proposing to scrub prior contracts.

EPA is now in discussions with the National Treasury Employees Union, the agency’s second largest union, over ground rules for contract negotiations. The union was given notice in late July that the agency would end its contract once it expires in October.

NTEU soon after contacted its union officials at EPA, asking them to spread the word among members and have them take a survey and provide personal contact information. NTEU President Tony Reardon also noted in a memo that a provision in the union’s contract says it "shall continue in full force" until a new deal was reached.

NTEU’s survey found widespread worry among its members over possible changes to workplace life, including telework. Nearly 600 EPA employees responded to the survey, with 75% believing that reducing or ending telework would "play a role" in their decision to retire or find another job, while 83% said morale would decrease if rights in the current contract were affected, according to the poll’s findings.

EPA and NTEU have traded proposals over ground rules for the negotiations. The agency, however, has already suggested a federal mediator should join the discussions.

In an email last month, a senior labor attorney at EPA told NTEU "there is a significant divide" between their proposals for ground rules.

"I think we would benefit from [Federal Mediation and Conciliation Service] intervention at this point. I do not believe we are at impasse, but I believe the inclusion of a third party would be beneficial," said the attorney, who also called for the union not to wait until October.

"This is an Agency priority, and there is no need for such a delay."

In a statement shared with E&E News, Reardon said EPA and NTEU "are in the early stages of bargaining a new contract" and the union "will insist on good faith negotiations" for "a mutually-agreed upon collective bargaining agreement."

"This administration, however, has a mixed record on contract bargaining and we are keenly aware that some agencies — including EPA — have used this process to illegally take away employee rights and benefits and undermine labor-management relations," Reardon said.

"We do not know yet exactly what changes in the contract EPA management will seek, but the EPA employees we represent are committed to the mission of the agency. Any attempt to roll back their long standing telework programs — especially in densely populated cities with long commutes — would be problematic."

NTEU represents about 2,100 EPA employees through four chapters based in the agency’s headquarters, regional and other offices across the country. Its current contract with EPA includes a full-time telework option for employees.

Under the contract EPA imposed on AFGE’s bargaining unit employees at the agency, they are required to report to their work site four days per week, thus allowing one day of telework a week.

NTEU union officials are watching the contract talks with EPA.

"This is one of the few times that politics reaches down in the heartland and affects our day-to-day lives here in Lenexa, Kan.," said Lisa Hanlon, president of NTEU Chapter 294, which represents EPA Region 7 employees. She noted that telework "affects when people can pick up their kids from school, whether they can drop them off at school."

"I don’t think NTEU is in a comparable situation yet. I think we will be concerned if we have to go to the [Federal Service Impasses Panel]," said Ottlinger, who works in EPA’s Cincinnati office. "I don’t think the impasse panel has a particularly supportive attitude towards unions."

One NTEU union official at EPA said "there is a lot of anxiety" about the contract talks with the agency.

"People keep coming up and asking if the same thing that happened to AFGE, the limitations on telework, is going to happen to NTEU," said the union official. "We are supposed to be an agency that cares about the environment. Making people commute more is anti-environment."

AFGE, meanwhile, is pushing for legislation that could void its contract with EPA.

Earlier this month, the union sent reporters a letter from lawmakers calling on Democratic House leaders to include a provision that would withhold funds from enforcing agencies’ collective bargaining agreements not agreed upon by parties in final spending legislation for fiscal 2020. Like EPA, other agencies under the Trump administration have imposed contracts over union protests.

An AFGE spokesman told E&E News that the Federal Labor Relations Authority continues to investigate the union’s unfair labor practice complaint against EPA, and the agency has not agreed to go back to the bargaining table.

"EPA has sent notice and attempted to negotiate telework with AFGE, however AFGE refused to bargain with the Agency. Therefore, EPA implemented its initial contract proposal for the AFGE bargaining unit, which included telework," EPA spokesman Michael Abboud told E&E News in a statement. "Some EPA employees have also been asking why they are required to be part of the bargaining unit."

President Trump last year issued a series of executive orders that targeted federal workers, which included provisions similar to those in EPA’s imposed contract with AFGE. A district court challenge against the orders won by unions was tossed earlier this year by a federal appeals court, which unions have since appealed.

Changes also may be looming for telework across EPA.

E&E News obtained a draft order that would revise a prior directive on telework policy, limiting its practice. The order was requested for comment at the agency in late July.

EPA’s prior order on telework, issued in January 2016, said employees can telework up to full time.

The draft order covers non-bargaining unit employees, like managers, members of the Senior Executive Service and Schedule C political appointees. EPA employees covered by unions’ collective bargaining agreements, however, have to adhere to those agreements, including on telework.

EPA press officials didn’t address in their statement a question on whether the draft order on telework has since been finalized.

"What is most striking to me is the variance between collective bargaining agreements and what this policy states," said Stan Meiburg, a former longtime EPA official who served as acting deputy administrator during the Obama administration. One day of telework is allowed under EPA’s contract imposed on AFGE versus two days of telework for managers and other top officials under the draft order.

"I think it is going to be hard to argue that it is equitable," said Meiburg, who is now a sustainable studies professor at Wake Forest University.

"It is a kind of union-busting," Dreyfus said. "It is telling folks that if they got rid of their union, they might get an extra day a week to telework."

Meiburg also questioned whether the order would be too rigid for EPA.

"Telework is always about what is most effective for the agency. The question I have is: Would the policy be flexible enough to be in the interest of the agency?" he said. "For example, what if the agency wanted to retain an employee who was moving out of the local commuting area?"

EPA also has pushed forward on contract negotiations with other unions, proposing to limit telework for their bargaining unit employees, too.

The EPA unit of Engineers and Scientists of California, IFPTE Local 20, and the agency earlier this month signed off on ground rules for such talks, which are expected to begin in November.

EPA has already proposed a new collective bargaining agreement for the union. It’s similar to the contract imposed on AFGE, including a provision that requires employees to report to the work site four days per week. Mark Sims, the union’s president, said he considers the offer "a slap in the face."

"I have had people tell me in the bargaining unit that I love working at the agency, but if they restrict telework to one day per week, I’m going to leave. People have already told me that," Sims said. "I would love the agency to make their business case for restricting telework. I would love to hear how that promotes the efficiency of the service."

ESC represents about 250 EPA employees, including scientists, engineers and accountants, who work in EPA Region 9. Under its telework agreement, employees represented by the union can telework up to full time.

Some talks with EPA unions were initiated in 2018, with formal negotiations now coming later this year.

In April 2018, EPA gave notice to National Association of Government Employees Local R1-240 that it wanted to negotiate the union’s contract. The two have traded proposals and earlier this month signed ground rules for negotiations, which are expected to begin in October.

One of EPA’s contract proposals for the union scrubbed its prior agreement, including the provision on telework in its entirety.

"They are proposing to gut it. They have crossed out everything in the original CBA — the preamble, the table of contents, everything," said Lesley Mills, president of NAGE Local R1-240, which represents about 60 EPA employees who work in its Atlantic Ecology Division in Narragansett, R.I. "They are targeting telework. The agency has done a complete 180. They have gone from wanting telework, seeing it as a budget-saving approach, to basically badmouthing telework."

Leah Oliver, president of National Association of Independent Labor Local 9, said her union received notice from EPA management in June 2018 that it wished to terminate its contract. Since then, the agency and the union have signed off on ground rules and have been bargaining over the contract, agreeing to two dozen of its articles, Oliver said.

Still, Oliver said higher management at EPA wants to reduce telework and otherwise restrict flexibility in employees’ work schedules. She noted that the collective bargaining agreement for the union, which represents about 40 EPA employees stationed at the Gulf Ecology Division in Gulf Breeze, Fla., had been in place for three decades.

"No clear business case has been presented for changing what works well here," Oliver said in an email. "NAIL’s constructive relationship with local management is not factored into current negotiations, in that local managers are not included at the table."

The EPA spokesman added, "Currently, the parties are in negotiations on all four of these contracts, therefore EPA will not discuss current negotiation strategy or proposals."

EPA’s taking a tougher approach with unions has riled its employees. The NTEU official said they believe it is meant to encourage staff to leave the agency.

"We think their ultimate motive is to reduce the workforce," the union official said. "They tried it through the budget process, but Congress restored the funding. So the only other way is to make the workplace so unfriendly that people choose to move elsewhere."