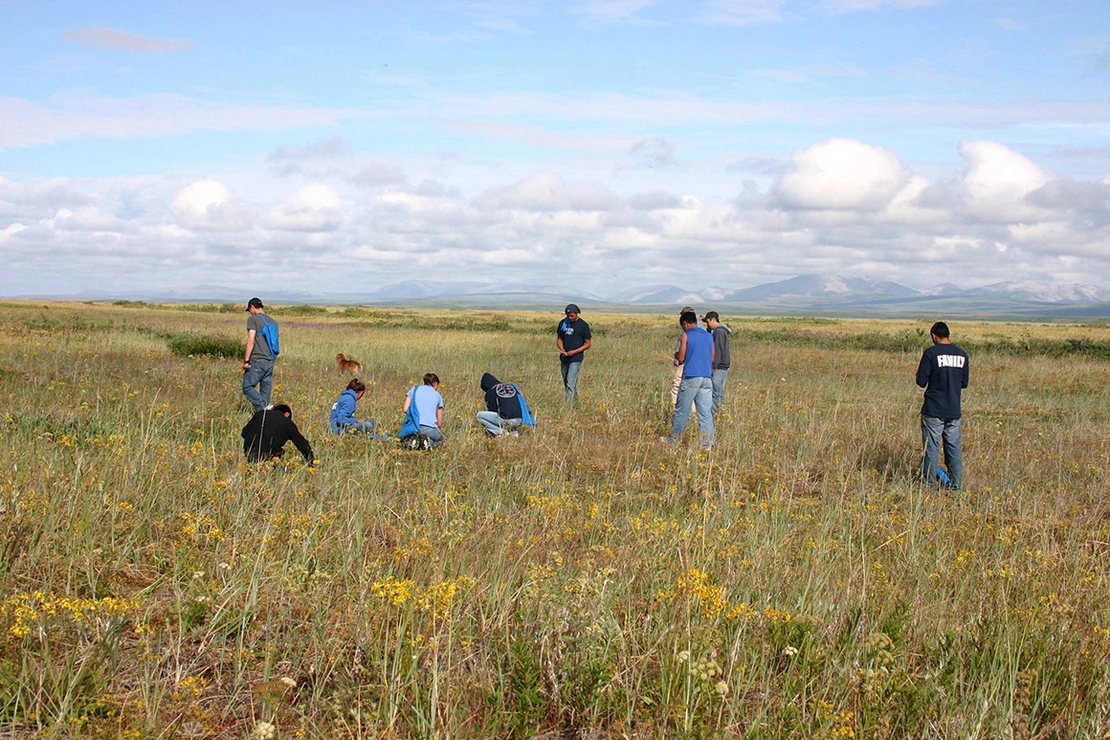 Teenagers in 2007 attending Camp Sivu near Kobuk Valley National Park in Alaska spread out on the tundra to pick early fall blueberries that grow in profusion behind the camp. Western Arctic National Parklands/Flickr

Along with her fellow researchers, USGS researcher Nicole Herman-Mercer has used Alaska Natives’ monitoring of wild berry crops to track what’s going on with the underlying permafrost. The researchers learned that the abundance and fruiting cycles of the berries, and where they were found, were changing along with the warmer temperatures affecting the permafrost. It’s one of a growing number of like-minded research efforts.

“Indigenous communities have knowledge of the environment, including permafrost dynamics, that has been developed over multiple generations based on observations and interactions with the land,” Herman-Mercer said.

She added that “this knowledge can help the scientific community better understand the complex dynamics associated with permafrost thaw that may help predict how and where permafrost may thaw in the future.”

Now, the USGS is surveying public opinion about plans to gather even more tribal observations of permafrost dynamics in the Yukon River Basin.

According to the agency, “information will be collected via semi-structured interviews with active land users in specific communities as well as relevant city, tribal council, and village corporation staff.” Questions will focus on observations of landscape change and infrastructure damage indicative of permafrost thaw.

“This information will be used to inform future permafrost monitoring efforts in the region, and it will be provided to communities for adaptation planning,” the USGS said.

As part of an Office of Management and Budget requirement, the science agency is collecting public recommendations concerning the proposed Alaskan information-gathering project through the month of April.

Nikoosh Carlo, who is Koyukon Athabascan and the CEO of CNC North Consulting, which focuses on community-driven solutions to climate change, said that “in the Arctic region and related to Arctic research in particular, communities in Alaska have first hand, on the ground, and in some cases multigenerational knowledge and experience.”

“Indigenous knowledge is critical to informing how research is conducted, on what topics, and how the results can be used for Indigenous peoples’ own decisionmaking,” Carlo said. “This is especially important in the Arctic, which is the most rapidly changing region on Earth.”

Though Indigenous knowledge has been recognized by federal agencies, to varying degrees, for some time, the White House and Interior Secretary Deb Haaland have given an extra boost. Haaland is the first Native American to head the Interior Department.

“I can’t emphasize enough how much we need the wisdom and guidance of Indigenous peoples,” Haaland said earlier this month, adding that “now we have an administration that takes the climate crisis seriously, and recognizes that Indigenous knowledge is the foundation for restoring balance to nature.”

Haaland and other senior administration officials hosted tribal leaders on April 5 for the first of two consultations on Indigenous traditional ecological knowledge, most of which was declared to be closed to the press. The second consultation will be held Friday, with officials saying they hope to build on existing projects.

Coastal tribes, for instance, have long fished and traded for eulachon in tributaries of the Columbia River. NOAA Fisheries and the Cowlitz Indian Tribe applied tribal oral histories to reconstruct historic distributions of the eulachon, a species of smelt.

“Those Cowlitz Tribal oral histories aided in identification of key spawning habitat, timing of eulachon runs, and run differences between tributaries and directly informed NOAA’s decision to list a population segment as threatened under the Endangered Species Act,” the White House Office of Science and Technology Policy reported.

In a similar vein, in Acadia National Park, the National Park Service is working with citizens of the Wabanaki Tribes on sweet grass harvesting. And in Alaska, the White House points to the work of the Northern Bering Sea Climate Resilience Area, established in 2016 and reinstated by President Joe Biden in 2021, as having the potential for including traditional knowledge in decisionmaking.

“As you know, academic science is not the only way of knowing,” former NOAA Administrator Jane Lubchenco said April 5. “We can and should elevate the role of Indigenous knowledge in informing government decisions.”

Lubchenco is now deputy director of the White House Office of Science and Technology Policy.

The White House set the stage early, with a November 2021 Tribal Nations Summit marked by the release of a joint memo promoting the use of Indigenous knowledge by the Council on Environmental Quality and the Office of Science and Technology Policy. The move has prompted some industry concern about additional impediments or delays to energy projects or other developments (Energywire, Dec. 6, 2021).

In part, the order only strengthened what’s been going on for some time, though perhaps in bits and pieces.

“In order for this to be meaningful consultation, we need to find a way to include the Tribe’s ecological knowledge, this knowledge that lasts for thousands of years,” Russell “Buster” Attebery, chair of Northern California’s Karuk Tribe, told Interior Department officials at a May 2021 tribal consultation, a transcript shows.

Herman-Mercer, for instance, noted that the USGS has been collaborating with the Yukon River Inter-Tribal Watershed Council and Indigenous communities on a permafrost monitoring project, called the Active Layer Network, since 2009.

“The interviews that are planned to be conducted with community members are new and what USGS learns from the interviews will complement the quantitative data USGS collect as part of the Active Layer Network,” Herman-Mercer told E&E News.

The active layer is the layer of soil above the permanently frozen ground that thaws during the summer months and freezes again in the autumn. By measuring the depth of the active layer in late summer at the time of maximum thaw, scientists are able to better understand the effects of a warming climate on permafrost.

A 2020 study by Herman-Mercer and colleagues noted that blueberries, cranberries and raspberries grow on Alaskan coasts with frozen ground, or permafrost.

The USGS team distributed surveys to four Indigenous communities: the Yup’ik villages of Hooper Bay, Kotlik, and Emmonak, and the Cup’ik community of Chevak. Researchers aimed to identify any changes in berry production.

“Many participants from the Indigenous communities have observed regional changes in berry fruiting cycles and abundance, and also in the habitats of common berry-producing plants,” the study noted, adding that “most respondents also noted hotter summer temperatures and a decrease in winter snowpack as potential drivers of changes in berry production.”