Amazon to surpass 1 GW of clean energy capacity. Is it enough? 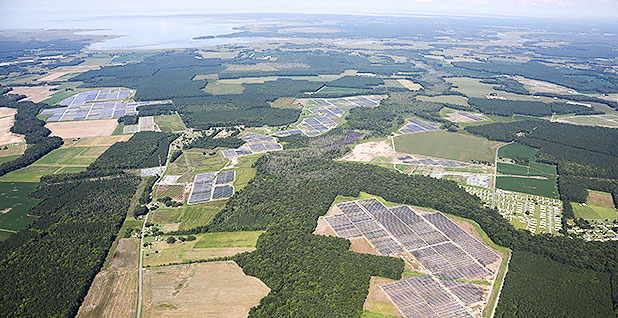 Amazon.com Inc. this month will begin receiving the first of roughly 930 megawatts of new renewable energy in what could be one of the largest expansions of wind and solar power by a private-sector firm in 2017.

The company’s growing portfolio of clean power projects — whose collective capacity should reach 1.16 gigawatts by year’s end — should help the e-commerce and internet services giant compete in the race to build the world’s cleanest computing infrastructure, according to organizations that track environmental performance in the IT sector.

Yet even with its sizable commitments, Amazon remains viewed by some critics as a clean energy laggard. It is generally not mentioned in the same company as its green IT rivals Apple, Google and Facebook, and it holds information about its environmental performance much more tightly than many other Fortune 500 companies, especially in an age of increasing corporate transparency.

Nevertheless, Amazon is moving quickly to meet ambitious clean energy targets, including in parts of the country where renewable energy has been slower to catch on, such as the Southeast and the Ohio Valley.

Officials at Seattle-based Amazon did not respond to a request for an interview. A spokesman for Amazon Web Services directed E&E News to a webpage detailing the company’s sustainability and clean energy initiatives.

As recently as November, Amazon said it had enabled 10 major renewable energy projects to date, including multimillion-dollar investments in regions where renewables have been slower to take hold, such as the Southeast and the Ohio Valley. When finished, those projects are expected to deliver 2.6 million megawatt-hours of energy annually, officials said.

The new deployments come more than two years after the company announced it would convert its massive cloud-computing division, known as Amazon Web Services (AWS), to meet 100 percent of its electricity demand using renewable resources by an unspecified date.

In 2015, roughly 25 percent of Amazon’s global AWS infrastructure was powered using renewable energy, and officials have set a target to meet half of all Amazon cloud-computing energy consumption using renewables by the end of 2017.

"We continue to ramp our sustainability efforts in areas where availability of renewable energy sources is low or proposed projects are stalled, and where the energy contribution goes onto the same electric grid that powers AWS data centers," Peter DeSantis, AWS’s vice president for infrastructure, said at the time.

The newest of Amazon’s clean power plants is a 208-MW wind farm in northeast North Carolina that will begin delivering power this month after developer Avangrid Renewables completes final checks on 104 turbines rising from a swath of corn and soybean fields in Perquimans and Pasquotank counties.

The nearly $400 million project, known as Amazon Wind Farm US East, will supply power primarily to the company’s network of cloud-computing centers in Northern Virginia, according to sources familiar with the project.

Northern Virginia, where AWS has a cluster of more than 20 data facilities, has long been a hub for Amazon cloud-computing activity, according to independent sources.

AWS already receives power from a 150-MW wind farm in Benton County, Ind., known as Fowler Ridge. That wind farm is owned and operated by Pattern Energy Group and began service in December 2015.

Those four wind farms — combined with the recently announced Amazon Wind Farm Texas, a 253-MW development being built by Lincoln Clean Energy — will push Amazon’s wind energy portfolio to roughly 900 MW of capacity, according to company figures, although it remains unclear how Amazon will use its 90 percent share of the Texas wind farm’s output.

Beyond its wind power investments, Amazon is also expanding its solar power portfolio, notably in Virginia, where Dominion Energy, an affiliate of the state’s largest regulated utility, Dominion Virginia Power, last year completed the first 80 MW of what should become one of the East’s largest photovoltaic solar fleets by the end of 2017.

When completed, the Amazon solar arrays will spread across parts of six counties and help Dominion meet a goal of installing 500 MW of solar photovoltaic capacity in its core states of Virginia and North Carolina.

Dominion will also play a critical role in moving clean energy from solar and some of the wind generation sites to Amazon’s data centers in Northern Virginia and Ohio under agreements forged between Dominion and Amazon and endorsed by the Mid-Atlantic regional grid operator, PJM Interconnection.

"We build the projects with our partners, we produce the electricity, and the electrons go to Amazon to use them how they see fit," said Frazier.

A ‘deafening silence’ on carbon footprint

Gary Cook, a senior analyst with Greenpeace International and author of an annual report examining the IT sector’s energy profile, said Amazon has taken meaningful steps over the last 18 months to expand its renewable energy portfolio. But, he added, the company’s purchases of renewable energy have to be measured against its overall energy consumption, which has also grown substantially in recent years.

"These renewable energy deals are certainly an indication that they are taking clean energy more seriously and they are responding to their customers who want them to do more," Cook said. "But if you ask them about their overall energy demand, and how fast they’re growing relative to energy consumption or anything that speaks to carbon footprint or greenhouse gas emissions, you get a deafening silence from the company."

Indeed, Amazon’s refusal to report details on its energy use and associated carbon footprint has been a sore spot for some time, and critics have suggested the company’s lack of transparency is an ugly counterweight to its pledges to scrub its cloud-computing infrastructure and other facilities of carbon-based energy.

Nevertheless, Amazon executives maintain that "energy and environmental efforts are taking place across the company, and at our locations around the world," according to the firm’s sustainability webpage.

And it can justifiably take credit for broadening renewable energy’s footprint beyond traditional hot spots like California for solar and Texas, Iowa and the Great Plains for wind power. The company has also invested in green rooftops and energy efficiency, and it receives recycled energy from a district energy project to heat 3 million square feet of office space in Seattle.

More recently, observers note, Amazon has taken a more active role in clean energy policy debates, at both the state and federal levels.

In 2016, the company joined Apple, Google and Microsoft in a legal brief supporting the Obama administration’s Clean Power Plan targeting carbon emissions from the electricity generation sector. AWS has also joined the American Council on Renewable Energy and U.S. Partnership for Renewable Energy Finance to work with state and federal policymakers and other stakeholders to enable more renewable energy opportunities for cloud providers.