An armored wall could slow Laura. Trump called it ‘crazy’ 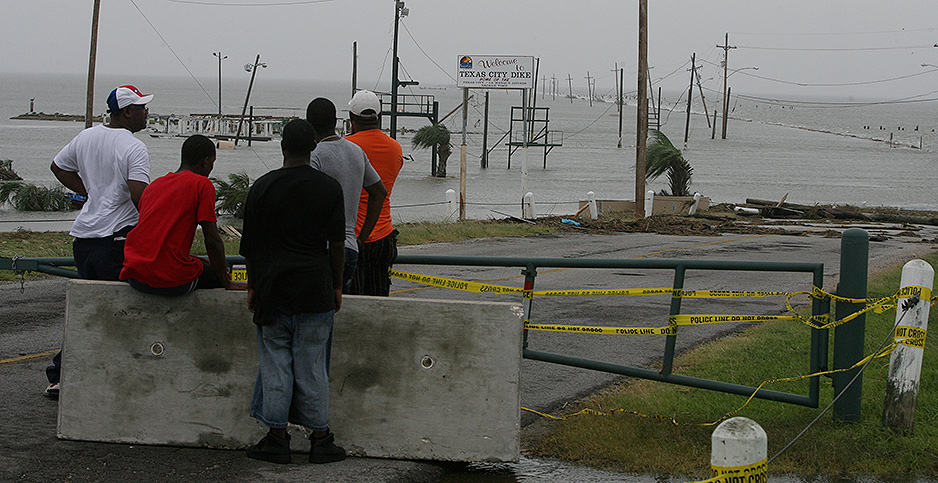 People near Houston looked toward the submerged Texas City Dike after Hurricane Ike surged onto land in 2008. A massive flood project known as the "Ike Dike" is planned for the area. Bill Olive/Rapport Press/Newscom

If Hurricane Laura shifts west and lands squarely on the Texas coast, it will be the fifth deadly hurricane to strike the Lone Star State since 2000.

That’s far too soon for Texas and federal partners to complete a storm surge protection system designed to shield the Lone Star State from major hurricanes. But they’re hoping the multibillion-dollar project might be done in time for a sixth major hurricane.

Or maybe a seventh.

The project, nicknamed the "Ike Dike" after the 2008 hurricane of the same name, is expected to cost as much as $31 billion and take an additional decade to design, permit and build.

The Army Corps of Engineers adopted the plan — known as the Coastal Texas Protection and Restoration Feasibility Study — in October 2018. It calls for an integrated network of sea walls, surge gates, vertical lift gates and a "ring barrier" around Galveston Island, as well as beach and dune restoration along 70 miles of coastline.

The plan is still in its early stages, however, with a second draft and accompanying environmental impact statement due in early October, followed by a final draft plan expected in May 2021. That’s all before any federal money is allocated by Congress to build the structures, which is expected to take until 2031.

At the current pace, Texas could see several more major hurricanes before 2031, based on the state’s storm history and scientific projections of how climate change will affect storm behavior.

A major hurricane protection system for the Texas coast was conceived after Hurricane Ike. Elements of that initial plan, developed in conjunction with coastal engineers at Texas A&M University, Galveston, are incorporated into the broader coastal Texas study. Its early nickname of Ike Dike has stuck around for the current version too.

Texas and the Army Corps have been working on other projects, including a risk reduction and coastal restoration project between Sabine Pass and Galveston Bay that was scoped before Hurricane Harvey. Funding for the roughly $4 billion project materialized in 2018 under the Bipartisan Budget Act.

Kelly Burks-Copes, the Army Corps project manager for the larger plan, said Laura could bring a level of storm surge the Ike Dike would protect against — though operating manuals for the system are far from complete.

"This is the kind of [storm] system that this was designed for," said Burks-Copes in an interview. But whether it would be activated depends on several factors, including the size and strength of the storm, its projected landfall time and place, and other conditions that could reduce or increase the risk to the region.

The coastal Texas study is one of four options considered after Ike in 2008 to mitigate property damage from future hurricanes and increase resilience along the central Texas coast, including Houston and Harris County, Galveston, the Houston Ship Channel and Port of Houston, and the region’s expansive petrochemical industry.

In 2017, Texas Land Office Commissioner George P. Bush asked President Trump to help move the project along with $15 billion in federal cost share that’s necessary to begin construction. The money did not materialize under the president’s infrastructure plan.

Instead, Trump at a 2019 rally in Dallas mocked Texas officials for wanting to build "a dam in the ocean," calling it a "crazy thing that may work or it may not," adding the state "made a fortune" from federal aid post-Harvey.

Criticisms also have come from environmental groups and other coastal experts. Researchers for Rice University’s Severe Storm Prediction, Education & Evacuation From Disasters Center, for example, said the first study draft failed to account for strengthening storms attributable to climate change. The slow pace of the project is also doing little to help the region defend against hurricanes between 2020 and 2031.

"Our biggest concern is the length of time it will take to build," said Phil Bedient, director of the SSPEED Center, which has developed a smaller-scale surge protection proposal called the Galveston Bay Park Plan. "We get a major storm in here about every 15 years. The last one was 2017, so we could see another one before this project is complete."

The Galveston Bay Park Plan also incorporates green features, including a new string of islands in Galveston Bay that will double as a storm surge barrier and recreational park space. Bedient said it could be built relatively quickly and compliment a larger coastal barrier system.

But the Army Corps and Texas officials are holding firm to the original plan.

Burks-Copes said the storm surge plan as drafted would deflect as much as 80% of risk from future storms, particularly from a 2- to 3-mile-wide gated superstructure spanning the primary inlet between the Gulf of Mexico and Galveston Bay.

A central feature of the plan is the 70-mile-long coastal barrier and 18-mile ring barrier around Galveston Island. The ocean barrier, which would enhance an existing sea wall, would have 15 lift gates to allow for the flow of water and commerce during normal times, but the system would be fortified as hurricanes approach.

Yet even as critics, including some environmental groups, question the plan’s cost and worry about its impact on the region’s complex coastal habitat, Burks-Copes said the Ike Dike remains the quickest and most vetted proposal to address the region’s rising storm risk.

"There is no other proposal out there that has the funding to be completed in the time frame that we have," she said. "The solutions we’re proposing are not only innovative, but they’re long-lasting and can be adapted over the long term if we see thing like climate change changing conditions in the Gulf."

For example, the study relies on simulations of 660 hurricanes of varying strengths and landfall characteristics to allow the coastal protection system to adapt to changing conditions.