An oil company wants to take CO2 from air. Here’s why 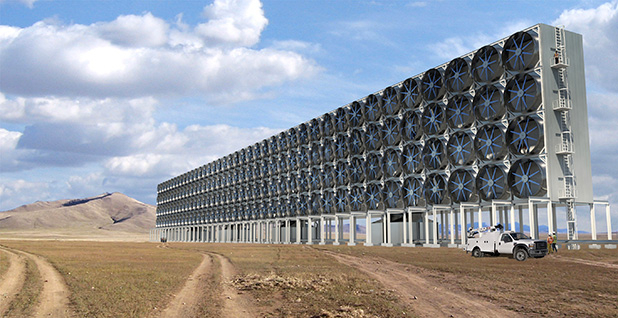 An artist's rendering of a fan system being developed to remove carbon dioxide from the atmosphere. Carbon Engineering/Cover Images/Newscom

Oil companies specialize in extracting carbon dioxide-laden hydrocarbons from the earth. But could they use their expertise to put that carbon back where they found it? The answer could decide the industry’s future — and have important implications for the planet.

Occidental Petroleum Corp., the Texas shale titan, has emerged as an early test case of whether an oil company can make the shift to carbon management. Since the beginning of 2018, the Houston-based oil producer has invested in an array of enterprises aimed at cutting carbon from factories, power plants and the atmosphere itself.

In some ways, the moves represent an extension of Occidental’s current business. It’s already the world’s largest handler of CO2 used for enhanced oil recovery, a process in which carbon dioxide is injected into flagging oil reservoirs to stimulate production. The pressing question is whether Occidental’s investments will turn the carbon producer into a carbon manager.

Vicki Hollub, Occidental’s CEO, seems to think so. At industry conferences and in calls with investors, she speaks of the need to address climate change and preserve the industry’s social license. She highlights Occidental’s efforts to reduce flaring, the process where surplus gas produced at oil wells is burned off into the atmosphere, and the emissions benefits of enhanced oil recovery. The Occidental boss is fond of citing studies showing that 40% of carbon injected into oil reservoirs remains there, lowering the emissions intensity of every barrel of that oil.

"I think what we need to focus on now as an industry is what we do now for our Earth, what we do for climate," she told an energy conference at Columbia University last year. "And we’re developing now the technology to start to have a smaller footprint, not only from a land perspective environmentally and on our fresh water, but also with respect to emissions. Our commitment is to do that more aggressively."

Occidental’s investments hint at a wider debate over the role oil companies should play in a transition to a low-carbon economy. Climate activists are deeply skeptical. Their concerns are championed by Sen. Bernie Sanders (I-Vt.), a presidential candidate, who has advocated for holding fossil fuel companies criminally liable for climate damages and phasing out fossil fuels.

But a significant number of climate researchers believe oil companies could play a key role in lowering emissions. Their arguments are twofold. First, even the most ambitious carbon-cutting scenarios envisioned by the Intergovernmental Panel on Climate Change foresee continued oil consumption, largely thanks to demand from hard-to-green sectors of the economy like aviation and heavy industry. Enhanced oil recovery can lower the emissions associated with that oil, they argue.

"At the end of the day, every ton of CO2 from a future barrel of crude oil needs to be, at minimum, offset if we’re going to get to deep decarbonization," said John Larsen, an analyst at the Rhodium Group, an independent research firm. "There are going to be other sectors where decarbonization is really tough."

Oil companies also look uniquely suited to serving a second role in cutting emissions: removing CO2 from the atmosphere and storing it underground. The IPCC reported the world is unlikely to prevent global temperatures from rising 1.5 degrees Celsius without deployment of carbon removal technologies like direct air capture, a process of sucking CO2 out of the atmosphere and storing it underground.

In a report last year, Rhodium concluded that direct air capture is a key component of reaching net-zero emissions by midcentury, along with greening electricity, energy efficiency, and electrifying transportation and home heating and cooling. The firm estimated that the U.S. will need to remove and permanently store 560 million to 1,850 million metric tons of CO2 with direct air capture to hit net-zero emissions by midcentury.

The problem is that capturing that carbon underground is expensive. Rhodium estimates Congress would need to raise the federal subsidy for geologic storage from $50 a ton today to $180 a ton to help the first large-scale direct air capture plant break even.

Enter an oil company like Occidental, which is exploring plans for a direct air capture plant in West Texas with Carbon Engineering, a Canadian startup it invested in last year. Occidental could inject CO2 captured by the proposed plant, a huge facility with long walls of large fans, into its oil wells. The economics there are more favorable. The company can rely on an existing federal subsidy ($35 per ton for enhanced oil recovery), credits from California’s Low Carbon Fuel Standard (now hovering around $200 a ton) and the sale of CO2 for oil field use.

Plants built to provide carbon to the oil field could prove a valuable testing ground for direct air capture and carbon capture and sequestration projects by lowering costs and opening the door for their application in other fields, advocates argue.

Occidental’s foray into carbon management comes with a host of questions. First and foremost, where does low-carbon investments fit into Occidental’s wider business? Occidental is a central player in the Permian Basin, the booming oil fields of West Texas and New Mexico that have transformed America into an oil power.

The company nearly doubled its Permian production between 2016 and 2018 and then added rival Anadarko Petroleum Corp. in a $38 billion takeover last year. The deal doubled Occidental’s Permian output and made it the basin’s top producer.

On Wall Street, concerns over the Anadarko deal don’t center on emissions but the way the takeover was financed. Some analysts argue that the company gave overly generous terms to Warren Buffett in exchange for $10 billion in financing. Activist investor Carl Icahn, an Occidental shareholder, has announced an effort to remake the company’s board.

The result has been a growing focus on debt reduction. Occidental said in November it would cut its budget from $9 billion in 2019 to around $5.5 billion in 2020.

Where that leaves the low-carbon business is unclear. Occidental did not respond to requests for comment. And it has not disclosed how much it is spending on low-carbon investments. The company maintains a stake in Net Power LLC, a natural gas plant that is testing whether it can economically capture 95% of its emissions. It’s also exploring the feasibility of carbon sequestration at an ethanol plant in Texas and a cement plant in Colorado.

Oxy Low Carbon Ventures LLC, the subsidiary overseeing those projects, is part of Occidental’s midstream business, which also includes pipelines, natural gas processing facilities and power plants. In 2019, Occidental budgeted $100 million for its entire midstream segment. It spent $4 billion on its shale assets in the Permian.

Occidental’s low-carbon business likely represents a hedge, said Zoe Sutherland, an analyst who tracks the industry at Wood Mackenzie. Today, Occidental extracts naturally occurring CO2 from a geologic reservoir in New Mexico and transports it via pipeline to legacy oil wells in the Permian. Capturing CO2 from a power plant or factory could significantly lower Occidental’s production costs, she said.

"They are taking this opportunity to build on that, to invest in technology that is going to bring costs down, but to send a message that they’re working toward a lower carbon-intense business," Sutherland said.

She stressed it remains early days in the oil industry’s effort to reimagine itself.

Royal Dutch Shell PLC has talked of becoming the world’s largest electricity company (Climatewire, Sept. 16, 2019). Equinor ASA, the Norwegian state-owned oil company, is investing heavily in offshore wind. The Spanish oil major Repsol SA has committed to carbon neutrality (Climatewire, Dec. 5, 2019). Yet even those companies, which represent leaders in the field of energy transition, continue to spend large portions of their revenues on oil and gas production.

"Right now the whole industry is trying to deal with the issues of climate and the pressures put on them by investors. They can see that change is coming and they need to be ahead of the game," Sutherland said. Occidental’s enhanced oil recovery business makes it unique among its peers, she said.

"There are not so many companies that have expertise in that area. That has put them ahead of the pack, so to speak, on their carbon strategies."