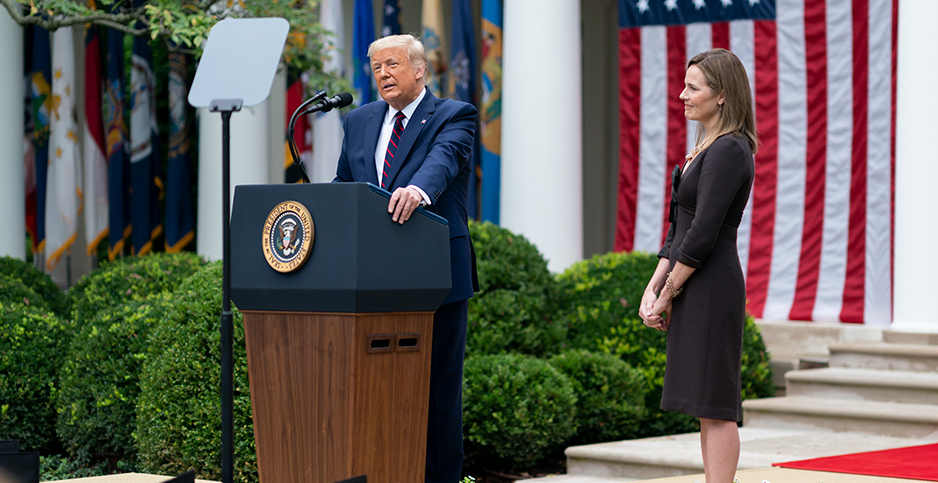 In the chaos of the upcoming presidential election and Supreme Court nomination battle, the legal fate of the Trump administration’s environmental rollbacks is far from certain.

Regulatory instability is nothing new — federal environmental rules from any administration are all but guaranteed to face litigation — but experts worry there isn’t time to rehash climate policy in court every four years.

And Trump has now installed more than 200 judges for lifetime positions on federal district and appellate benches, potentially creating new judicial hurdles for future administrations that want to take stronger action on climate.

Farber added: "Are we going to do that again?"

Lengthy court battles are a tool that environmental and industry interests alike can use to stall and perhaps kill policies they don’t agree with.

For example, after marathon arguments in the U.S. Court of Appeals for the District of Columbia Circuit in 2016, the Supreme Court froze implementation on the Obama-era Clean Power Plan, which the Trump administration then replaced with the Affordable Clean Energy rule. The Trump rule is now tied up in a separate round of litigation that went to oral argument in the D.C. Circuit earlier this month.

Trump-era policies may now stand a better chance in federal appeals courts, which often have the final say on litigation and where the president has already appointed 53 judges.

On the Supreme Court, the Senate appears poised to confirm Trump’s third nominee, Judge Amy Coney Barrett, likely cementing a 6-3 conservative majority for a generation. During her nomination hearings, Barrett said she held no "firm views" on climate science.

The ideology of judges is not a perfect indicator of how they will rule, but climate experts are wary that Trump-appointed jurists would strike down aggressive action on greenhouse gas emissions when communities across the country are already suffering from the impact of rising global temperatures.

An uptick in Earth’s temperatures over the last century has unleashed a chain reaction of more severe storms, heat waves and flooding, and the latest U.N. Intergovernmental Panel on Climate Change projections say world leaders have about a decade to combat global warming before its impacts become even more severe.

"Even [though] the science has been quite clear that we needed to," she said.

Solutions outside the courts

Drawn-out courtroom slugfests may be avoidable if lawmakers tighten up legislation to give space to federal agencies to take action on climate, Arroyo said.

"You sort of take those [questions] off the table, because it’s just very clear in the statute and that’s the end of the analysis for the court," she said. "I think that is our best shot at this point."

Still, it has been decades since Congress has offered up "new meat" in terms of environmental law, said University of Michigan professor and Brookings Institution fellow Barry Rabe. The Clean Air Act, for example, was passed in 1963 — long before the modern understanding of human impact on global climate change.

"We’ve had every combination of partisan control you can have: all Democrat, all Republican … the outcome is no new environmental legislation of major consequence," Rabe said. "That creates a vacuum."

The legislative void is not the only reason the courts have taken on a more prominent role in policy battles, "but it’s a huge driver," Rabe said.

Legal experts have warned that any sweeping climate policies introduced by a potential Biden administration could face big challenges if they come up against a Supreme Court with a conservative majority that’s less friendly to broad interpretations of agency powers (Energywire, Sept. 28)

"If you don’t get legislation, your best bet probably is just to try to do 100 smaller-scale things, each of which will add up," he said. "You may be able to get some real things done that way, but … again, the clock is ticking."

"But we have no choice but to try," she added.