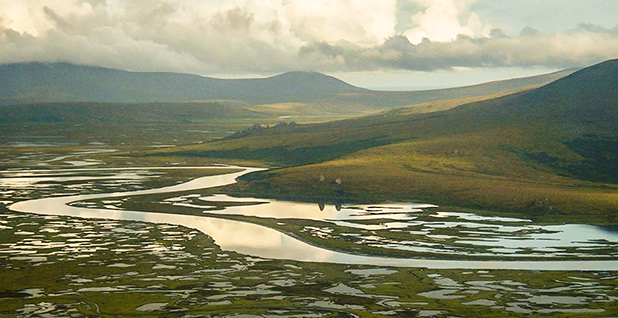 The proposed Donlin Gold mine site is located in a region of Alaska between the Yukon and the Kuskokwim rivers known in mining circles as the historic Kuskokwim Gold Belt. Joseph/Flickr

The Army Corps of Engineers’ approval this week of the massive Donlin Gold mine project in southwestern Alaska disregarded EPA concerns about how the project should offset damage to wetlands and streams.

As the Clean Water Act permitting agency for development in wetlands, the Army Corps is supposed to require "compensatory mitigation" — restoring or preserving water resources to offset damage done by projects.

The agency’s Alaska District is requiring Donlin Gold to preserve thousands of acres of wetlands and restore several streams to compensate for damage caused by the open-pit mine, which would sprawl over 2.2 square miles and require nearly 5,000 acres for tailings and waste rock disposal.

But the district hardly required any mitigation for the 316-mile pipeline that would supply natural gas to the mining project.

While the pipeline would permanently destroy 200 acres of wetlands and 1,363 linear feet of streams, the Army Corps will require Donlin to offset only 4 acres of the damage by purchasing credits from a third-party mitigation provider.

The Alaska District also is not requiring any mitigation for temporary damage to wetlands and streams from pipeline construction, which could last longer than five years, because the construction "would not impact more than 0.03 percent of any watershed it crosses."

That decision disregards comments EPA filed in May on an earlier version of the project’s mitigation plan that criticized the lack of pipeline offsets.

"The current [plan] does not propose to offset all of the aquatic resource functional loss associated with the project," EPA wrote.

The Donlin mine is the first major project approved by the Alaska District since EPA and Army Corps headquarters strengthened requirements for when offsets are required for wetlands impacts in Alaska (E&E News PM, June 18).

In June, the two agencies signed a new memorandum of agreement in the wake of an E&E News analysis that the Alaska District had required mitigation for only 26 percent of permits since 2015 (Greenwire, May 29).

The memorandum didn’t change mitigation requirements in Alaska but took aim at justifications the Alaska District had been using to allow unmitigated wetlands impacts by clarifying when and where offsets are required.

Jettisoned by that memorandum were two agreements between the Army Corps and EPA from the 1990s that the Alaska District had been misinterpreting to justify its decisions. The district often argued that even large projects that would destroy hundreds of acres of wetlands could have minor environmental impacts, allowing a "less rigorous" project review under current regulations.

Under the new agreement, "less rigorous" permit reviews are allowed only if projects are "small in size," would cause little direct impact or only temporarily affect the watershed, or would only affect wetlands and aquatic resources that provide limited environmental benefits.

The Army Corps’ record of decision approving Donlin’s project makes no mention of that memorandum, instead justifying mitigation decisions by citing the 1994 Alaska Wetlands Initiative the agreement specifically replaced.

"Donlin Gold has evaluated all available and practicable options to assure compliance with the provisions of the 2008 Mitigation Rule and the 1994 Alaska Wetland Initiative," the decision says.

The memorandum would also allow impacts from a single project, like a pipeline, to be mitigated in just one of the watersheds that project affects. That means the district could have required Donlin to pay other third-party mitigation providers near one segment of the pipeline.

Instead, the Alaska District has required Donlin to pay just one of two nearby third-party providers to offset just 4 acres of impact from the pipeline.

Alaska District spokesman John Budnik argued that the agency did follow the June agreement, saying it "specifically relates" to situations where "’traditional’ mitigation options are not available."

"In the case of Donlin, the applicant was able to fulfill their compensatory mitigation requirements utilizing ‘traditional’ methods, therefore there was not a need for additional flexibilities," he said.

"I just don’t understand how you can have an impact that is significant enough to require an environmental impact statement and not require mitigation for hundreds of acres of impact," she said.

The Alaska District ignored some other comments from EPA on the project, including a suggestion that the mine draw its water from the Kuskokwim River rather than Crooked Creek. Donlin had calculated that using the creek could result in up to 10 percent of water flow loss there.

EPA also warned that flow reductions in Crooked Creek could result in the creek going completely dry during the winter, but that sourcing water from the much larger and nearby Kuskokwim River could "avoid flow losses," a suggestion the Alaska District did not heed.

Although EPA criticized the mitigation plans for the Donlin project, the agency also wrote that it believed small changes to the plans could bring the mine into compliance.

"The EPA sees a clear path forward, where Donlin Gold can incorporate changes to the current proposed action and augment the record to demonstrate compliance with Guidelines," the agency wrote.

"Our comments in the enclosure are intended to articulate that path."