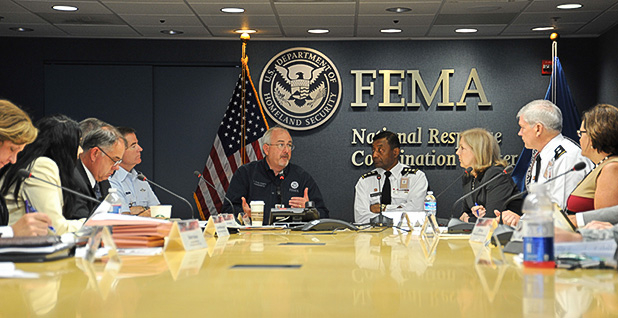 Artificial intelligence is being used in locations from Texas to California to prepare for the impacts of climate change.

Disaster responders throughout the country are setting aside old tools like Federal Emergency Management Agency flood maps and weather models and turning instead to supercomputers to measure risk from extreme events.

Among the pioneers in the field is One Concern, a Palo Alto, Calif.-based startup whose software platform allows officials to collect and analyze massive amounts of locational data and then calculate a community’s real-time risk of a catastrophic event. Craig Fugate, the former FEMA administrator under President Obama and onetime head of the Florida Emergency Management Division, is the organization’s chief emergency management officer.

The group’s technology provides "the necessary tools to help identify climate signals in ways that are measurable and even predictable," Fugate said in a recent interview.

Fugate is a data hound who is credited for developing the "Waffle House Matrix," an inexact but effective way of judging a weather event’s severity by whether the 24-7 restaurant chain is open and serving customers.

He joined One Concern last year after leaving the Obama administration.

The company was launched in 2015 by Stanford University engineering graduate students Ahmad Wani, Nicole Hu and Timothy Frank, whose mission remains to build what the company calls a "web of resilience" against natural hazards globally.

The origin of CEO Wani’s interest in such disasters came from two personal experiences — the first in 2014, where he saw firsthand the destructive power of monsoonal flooding in Pakistan and India, and shortly after in California where he felt the Earth literally shift during the South Napa earthquake of August 2014.

"I realized that there’s no science behind response," Wani told Time magazine last year. "There are thousands of 9-1-1 calls and response is not necessarily directed to places that need it."

Much of the company’s early work involved using big data to help earthquake-prone cities on the West Coast better prepare for and respond to seismic disasters. But this year, One Concern will begin offering a suite of services to help flood-prone communities, both large and small, identify their risks and take steps to mitigate against them.

Hu, who is One Concern’s chief technology officer, said in an interview that broadening the company’s platform to assess flood risk — and eventually fire, drought and other climate-induced natural events — is a natural progression for a company whose fundamental goal is to inject certainty into uncertain events.

"The problem now is that we know something bad is going to happen, like with Hurricane Harvey in Texas last year," she said. "So a large flood is going to happen, but until you have a robust predictive analysis, you don’t know which homes are going to flood or which demographic groups will be affected or by how much."

One Concern’s goal is to remove the unknowns from disaster response while also helping planners improve their predictive capabilities ahead of major hazards.

"We help cities understand that by running multiple scenarios [for disaster] events, they can figure out which places have the highest level of risk," Hu said. "We also try to show that if you add certain mitigation strategies, you can reduce both your risk and your cost of responding to disasters."

Fugate, the former FEMA director, has firsthand knowledge of the perils of insufficient planning for natural disasters. He headed the federal emergency response to Superstorm Sandy in 2012, one of the costliest and most disruptive tropical storms to strike the United States.

He also closely observed pre- and post-disaster response to last year’s trio of destructive Atlantic hurricanes — Harvey, Irma and Maria. He maintains that too much of the government’s response is predicated on what officials did not expect, rather than what they could and should have expected.

"We know much better now how to read the climate signals," he said. "And once you understand those signals, if you choose to build back only to what past data tell you is acceptable, you’re going to be paying over and over again.

"Our idea is to start building mitigation tools and strategies that account for changing climate conditions over time," he added. "Once we start applying AI and machine learning to these types of data, we can move to a more predictive approach that will be much more effective at protecting our communities."