As the West bakes, Utah forges ahead with water pipeline 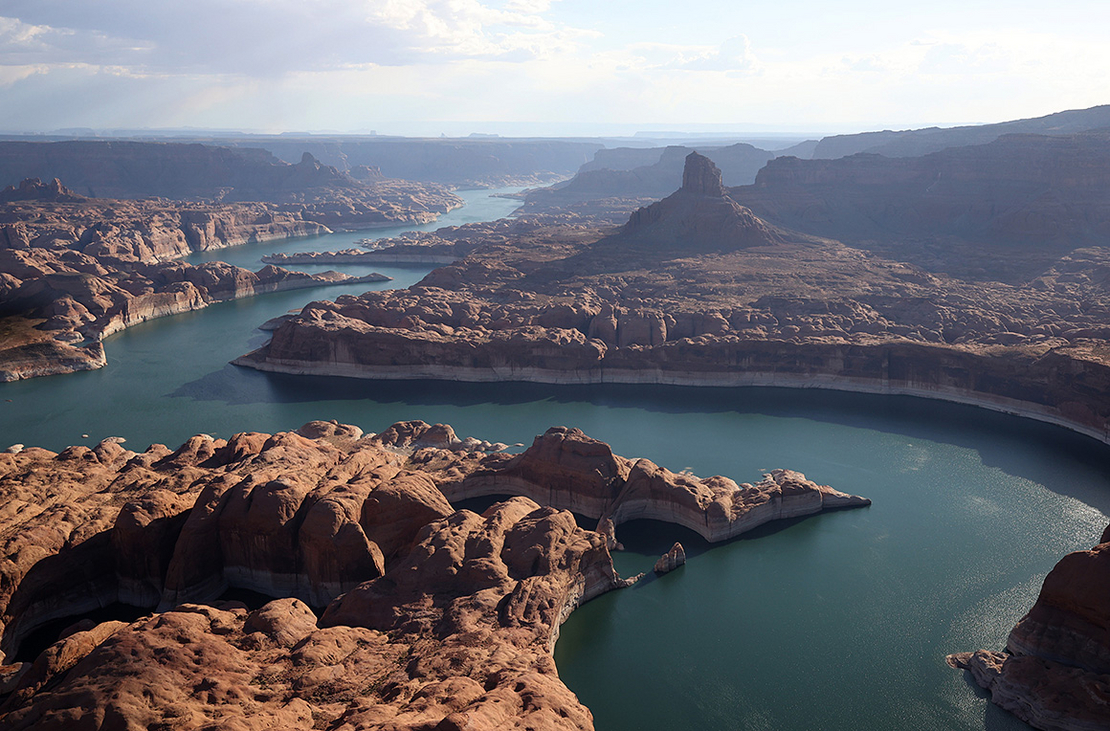 A small county in Utah is forging ahead with plans to build a billion-dollar pipeline to draw more water from the drought-stricken Lake Powell reservoir. Justin Sullivan/Getty Images

As drought and climate change strangle the Colorado River, a small county in Utah nevertheless continues forging ahead with a billion-dollar pipeline to suck more water from it to sustain its growing population.

The proposed Lake Powell Pipeline, a 140-mile straw from one of the country’s largest reservoirs to Washington County in southwestern Utah, has sparked backlash from other states in the Colorado River basin and environmentalists, and now has the Biden administration in a difficult position.

One expert says the project is illegal, a local Native American tribe has sued over the water that could fill it, and critics contend it is reminiscent of the American water mindset of the mid-20th century: Let’s build our way out of a shortage.

"It hearkens back to the days of the ’50s, ’60s and ’70s when, to meet future demands, you needed a pipeline," said Eric Kuhn, the author and former general manger of the Colorado River District. "Grab that last piece of water — that pipeline — whether the water is there or not."

Utah says it has a right to more water because it doesn’t use its full allocation under a 1922 compact that divvied up the river’s water. And, it argues, the current drought has underscored the need for the project.

"The drought has really hit us hard," said Zach Renstrom, the general manager of the Washington County Water Conservancy District. "That is one thing that the drought has really taught all water managers, is these large water infrastructure projects have been key to ensuring safe drinking water."

But the proposal is coming under increased scrutiny due to a state of emergency on the Colorado River — and it has put the Biden administration in a bind.

While the project appeared dead for years, Trump-era regulatory maneuvering gave it new life. The Biden administration says it is continuing to work on it.

For many, the pipeline epitomizes whether regulators are ready to leave behind the cement infrastructure that dominated the 20th century as the West grapples with how to make do with less water.

"We are entering a phase on the Colorado River where we are going to need to have unprecedented levels of cooperation between the states," said Bart Miller of the nonprofit Western Resource Advocates, who has studied the project extensively. "Rather than historic gray infrastructure, we are going to need to build resilience, not this 20th century approach."

Virtually all of the American West is facing drought conditions, and conditions are particularly acute on the Colorado River, which has suffered through a more-than-20-year megadrought. The river feeds 40 million people and millions of acres of cropland.

Water levels at the river’s main reservoirs — Lake Powell and Lake Mead — have dropped to levels not seen since they were originally filled in the early to mid-1900s. They each hold just a third of their capacity, forcing the Bureau of Reclamation to declare a shortage for the first time ever last week and triggering mandatory cutbacks for Arizona, Nevada and Mexico (Greenwire, Aug. 16).

Utah has been among the hardest hit. Almost all of the state is in extreme or exceptional drought, according to the U.S. Drought Monitor — its most severe ratings. Most of the state’s reservoirs are about half full or less, prompting responses like Gov. Spencer Cox (R) calling on residents to pray for rain in June.

Against this backdrop, Utah has billed the up-to-$2 billion pipeline as a "key to our long-term water future."

Its argument: Utah and the river’s other Upper Basin states currently deliver more water than required to the Lower Basin states of California, Nevada and Arizona. Utah, it says, has a right to some of that extra water.

But critics say the project threatens to blow up the historically amicable relationship between the seven states in the basin and Mexico.

"Pretending we have a surplus is disingenuous," he said. "Everyone knows there is no surplus."

Years in the making

Utah has contemplated the Lake Powell Pipeline for nearly 30 years.

It forecast rapid population growth along the Wasatch Front, including St. George, which sits in Washington County. And it eyed unused water in its share of the Colorado River.

The Colorado River’s 1922 compact allocated about 23% of the Upper Basin’s water to Utah, and the state uses about 72% of that water.

The pipeline would help it tap another 86,000 acre-feet of water before it flows downstream to the lower basin.

State legislators gave the project a major boost in 2006 when they passed a bill directing regulators to study it.

But for years, it appeared stalled among federal regulators.

The project was originally submitted to the Federal Energy Regulatory Commission because it would also generate hydropower along the pipeline’s route.

That changed in 2019 when Utah revised the proposal. It nixed hydropower, shaving $100 million off the price tag and putting the project mainly under the Bureau of Reclamation’s purview.

The other basin states — Arizona, California, Colorado, New Mexico, Nevada and Wyoming — sent former Interior Secretary David Bernhardt a letter asking him to "refrain" from approving the pipeline. The Sept. 8, 2020, letter said the project would threaten the "consensus and collaboration" that has defined the basin’s management of the river, and said there are "outstanding legal and operational concerns" raised by the project.

So far, the Biden administration appears to be continuing that work.

"There is no schedule for the release of a supplemental DEIS," Bryant said. "However, Reclamation continues to meet with the cooperating agencies to move the project forward."

Utah still hopes to begin construction in the late 2020s, and it has continued to press on. State legislators established a new regulatory body — the Colorado River Authority of Utah — which appears aimed at developing the project (Greenwire, Feb. 5).

Renstrom, of the Washington County Water Conservancy District, noted several large reservoir projects were built in Utah in the 1980s and ’90s, which have been pivotal up to this point. Now, he said, more building is needed.

"We are living off those now," he said. "We are still benefiting from those projects constructed 20-30 years ago."

Utah’s slice of the pie

Critics of the pipeline have sought to highlight flaws in that reasoning.

Frankel, of the Utah Rivers Council, suggests considering the Upper Basin’s allocation of water as a pie. Utah’s slice is about 23% of that pie. But as the pie — the total amount of water — gets smaller, so does Utah’s 23% slice.

And indeed, the flows of the Colorado River have declined by about a fifth — or 20% — in the last 20 years. There is little to indicate that trend will reverse.

"The pipeline proponents have been in abject denial," Frankel said, "about whether the Colorado River is drying."

Renstrom said Washington County’s population of about 200,000 is continuing to grow. But critics note that with its multiple green golf courses, it has higher per-capita water use than many of its western neighbors, including Las Vegas, Denver, Los Angeles, Tucson and Phoenix.

Consequently, they argue, conservation should be tried before spending billions on a pipeline. And they contend that the county hasn’t fully tapped out its existing water resources.

Renstrom said there is no question conservation is part of the future. The county has reduced its water use by 30% per capita, he said, by using smart landscaping meters that automatically shut off sprinklers when it rains. It has also done rebates for installing low-flow toilets and programs to encourage drought-resistant landscaping.

"We have done conservation in past," he said, "we are doing conservation now and we are going to continue to do conservation regardless of whether the pipeline is done."

Kuhn, the former Colorado River District general manager, said he suspects an ulterior motive. He said that once the pipeline is built, it is easier to keep water in it — even if the Colorado River’s flows continue to shrivel.

That would require using the same playbook that many cities in the West — including San Diego and Los Angeles — have deployed: water transfers from farmers with senior rights.

"They are playing the long game," Kuhn said. "What is your ticket to play in that game? Their ticket to participate is a pipeline."

Further, the pipeline could target water that local tribes say was promised to them.

The Ute Indian Tribe has sued the state and Reclamation to resolve its water rights that could be affected.

Another local tribe, the Kaibab Band of Paiute Indians, raised concerns about the two proposed routes for the pipeline. In particular, they have objected to one that would run just outside their reservation but through their traditional territory. A second proposed route would cut through the tribe’s reservation but would be less problematic because it would be built on top of an existing highway right of way.

The tribe has repeatedly voiced its objections, said its lawyer, Alice Walker.

"The tribe remains substantially involved," she said, "and [has] concerns about the potential impacts of the pipeline on its homeland and its traditional territory.”

Renstrom and his water district have been upfront that agricultural transfers may be part of the county’s future. But he pushed back on the notion that it will pursue "buy and dry" policies that put farmers out of business.

"We do not like the buy-and-dry model implemented in other locations," he said.

Kuhn also suggested that the project is illegal because it would technically transfer water from the Upper Basin of the Colorado River to its Lower Basin (Utah is in both basins). Previously, that has required approval of all basin states.

To Kuhn, the pipeline is just one move in a complicated game as the basin states begin negotiating new river operations due in 2026.

"This is very early in a chess match," he said. "These large municipal districts are lining up their strategy to make sure as the river continues to diminish because of climate change, they have access to the most senior rights — and those senior rights are agriculture. If you have the pipelines and canals in place, you’re in good shape."

“They want to get this done before it’s impossible to get done," he added. "They may have missed that window. Twenty years ago, the project would be under construction or built.”