Backlash and confusion over talk of executive order 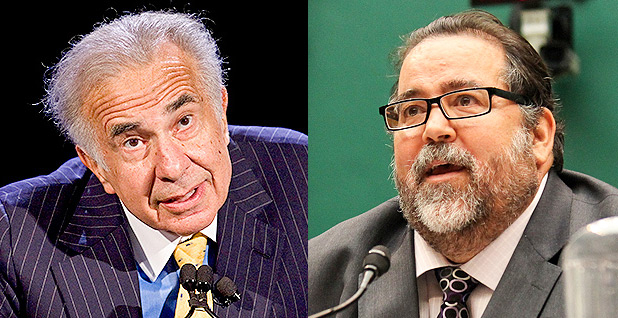 Despite the biofuel industry claims, however, the White House says there is no related executive order in the works. The administration’s comments follow controversy yesterday following news of a deal.

Developments have heightened concerns about Icahn’s role as President Trump’s special adviser on regulatory reform and caused an uproar in the ethanol community, which appears divided on the issue.

The agreement, put forth by Icahn and refiner Valero Energy Corp., would change the so-called point of obligation for blending ethanol into gasoline from oil refiners to fuel blenders.

Icahn has significant investments in the oil and gas industry and stands to reap a windfall from shifting the blending burden.

As of last year, Icahn Enterprises LP owned an 82 percent stake in oil refiner CVR Energy Inc. The RFS requires it to either blend its oil with renewable fuels or buy credits to meet its legal obligation.

The commotion began yesterday when Bob Dinneen, CEO of the Renewable Fuels Association, said he had agreed to support the burden shift in exchange for relaxed restrictions for E15 — gasoline containing 15 percent ethanol &mdash year-round.

The 15 percent blend is currently available only in the cooler months, with most gasoline containing no more than 10 percent ethanol.

Dinneen, whose group has historically opposed the burden shift, said a Trump administration official called him and said the executive order was non-negotiable (Greenwire, Feb. 28).

"Our top priority this year is to ensure consumers have year-round access to E15 and we would like the Trump administration to help cut through the red tape on this unnecessary regulation," he said in a statement.

White House spokeswoman Kelly Love yesterday said the Trump administration does not have an executive order in the works dealing with ethanol.

Dinneen responded to the White House denial by saying: "There is certainly something in the works, but they’re not going to confirm it until they are ready to roll with it."

Sen. Chuck Grassley (R-Iowa), who sits on the Agriculture, Nutrition and Forestry Committee and is a champion of the RFS, said he and his staff spoke to several sources and concluded there is no executive order pending.

Trump and his administration have so far committed to upholding the RFS, but Icahn’s deal is causing doubt and enraging advocates who see the agreement as a betrayal.

Fuels America, an umbrella group of ethanol producers, farmers and trade associations, voted yesterday to drop the RFA from its membership.

"Carl Icahn, in his conflicted role as owner of CVR Refining and special White House advisor, has sought to mislead biofuel advocates into accepting rewrites to the RFS in exchange for changes to outdated EPA regulations that limit summertime sales of ethanol," Fuels America said in a statement.

"Despite our opposition, the Renewable Fuels Association (RFA) has elected to lend its support to Mr. Icahn’s efforts. Accordingly, RFA’s position is no longer aligned with America’s biofuel industry and the Fuels America coalition has resolved to sever ties with the group."

Dinneen said he maintains "great respect" for Fuels America and believes in its mission.

"There seems to be some misinformation about our discussions involving an Executive Order emanating from The White House," Dinneen said in a statement. "RFA’s only objective is to expand market opportunities for ethanol. We will continue to work toward that goal, while continuing to protect the integrity of the RFS."

Other industry groups are also speaking out against the move, including the American Petroleum Institute. Downstream group director Frank Macchiarola yesterday condemned the deal and speculation surrounding it.

"We’ll comment on government decisions that are announced by the government, not speculation from a portion of a divided ethanol industry," Macchiarola said in a statement.

Obama administration officials said last year that changing the point of obligation would create confusion in the marketplace and wouldn’t necessarily bring more renewable fuel to the market as the RFS law intends.

EPA declined to shift the burden of compliance then but said it would take additional public comment on the issue, leaving the final decision to the Trump administration.