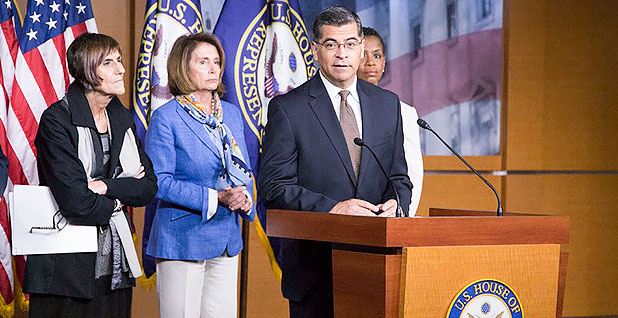 California Rep. Xavier Becerra’s (D) departure from Capitol Hill to become his state’s next attorney general marks a significant shake-up for Democratic congressional leadership — and for the Golden State.

Becerra, who was first elected to the House in 1992, found his rise in Congress stymied by stagnant leadership in the chamber. He tried once before to leave Washington in 2001 when he ran for mayor of Los Angeles, but lost to then-City Attorney James Hahn.

Term-limited as House Democratic Caucus chairman, Becerra had previously announced his intention to compete for the ranking member slot on the powerful Ways and Means Committee but quickly accepted Brown’s offer instead.

"Governor Brown has presented me with an opportunity I cannot refuse," he said in a statement.

Becerra must be confirmed as attorney general by both chambers of the California Legislature before taking over. But his departure from Congress would mark the continued decimation in the ranks of Democrats who are in their 50s and considered likely to eventually move into the highest echelons of House leadership.

Two other highly touted members in that category are moving on at year’s end: Rep. Chris Van Hollen (D-Md.) was elected to the Senate last month, and Rep. Steve Israel (D-N.Y.) is retiring. Another ambitious lawmaker, Rep. Debbie Wasserman Schultz (D-Fla.), may be hampered by her controversial tenure as chairwoman of the Democratic National Committee. Rep. Joe Crowley (D-N.Y.), the 54-year-old incoming chairman of the House Democratic Caucus, remains. Rep. Linda Sanchez (D-Calif.), who is 47, was elected vice chairwoman of the caucus Wednesday.

House Minority Leader Nancy Pelosi (D-Calif.) has been criticized for having too much control over top posts, keeping a tight rein on the caucus and providing too few opportunities for younger members to advance (Greenwire, Nov. 22).

Rep. Jared Polis (D-Colo.), a junior member on the House Natural Resources Committee, said opportunities for younger lawmakers have been at the forefront of caucus deliberations this week.

"Leadership has been hearing and addressing those concerns, and there will be, going forward, significant opportunities for members in their third through fifth terms," Polis, 41, told reporters.

In response to criticism, Pelosi has said she supports changing party rules to allow the caucus to elect the head of the Democratic Congressional Campaign Committee. The post is currently appointed by the Democratic leader.

Pelosi also supports creating vice chairman/vice ranking member spots on all standing committees that would be held by junior members; creating positions in leadership for a freshman member and one with three terms or less of tenure; and having three elected co-chairmen of the Democratic Policy and Communications Center team.

House Republicans have expanded the use of vice chairman assistant slots in recent years.

Rep. Jim Himes (D-Conn.) said his recent election as chairman of the New Democrats Coalition yesterday has given him a personal path forward.

"When you’re in the minority, you do wake up sometimes on a Wednesday morning and say, ‘What exactly am I doing here?’ but obviously this chairmanship has given me a pretty solid answer to that question," Himes, 50, told reporters.

He recognizes, however, that for most younger lawmakers, the lack of leadership opportunity is of great concern.

"Of course it is, and you’ve seen it play out over the last 48 hours," he said. "And to [Pelosi’s] great credit, the leader has heard that and made some proposals that allow for more elections, more seats at the table for those younger members."

Pelosi, 76, easily won her eighth term as the chamber’s top Democrat, a position she’s held since 2002. Minority Whip Steny Hoyer of Maryland, 77, retains his top deputy position, which he’s held since 2003. And South Carolina Rep. James Clyburn was re-elected as the No. 3 House Democrat. Clyburn is 76.

With the top three leadership spots remaining the same, Himes said it’s too soon to know whether Pelosi’s efforts are enough to quell junior angst.

"I think that’s a question to ask two weeks from now because while [Pelosi’s proposals are] not a done deal yet, the creation of vice ranking members, the creation of more positions at the leadership table is going to help take some of that pressure off," he said.

Amid the internal divisions over a stagnant seniority system, Rep. Sander Levin (D-Mich.) said he would not run again for the top job on the Ways and Means Committee.

Levin, 85, has also faced questions over whether it was time to let a younger lawmaker take the spot. Following the announcement, Becerra and Rep. Richard Neal (D-Mass.) pounced on the opportunity.

With Becerra returning to California, the door may be open for Neal, who is 67 and just won his 15th term. Neal is considered amenable toward bipartisan committee negotiations.

On a call with reporters yesterday, Becerra said Brown’s invitation to serve as attorney general came as a welcome surprise.

"I was not expecting to make this call, neither today and certainly not a week ago. But I’m glad I’m making it," he said, adding that leaving Washington after more than 20 years of service is "bittersweet."

"Where we move toward clean energy, I want to be vigorous in defense of what we’ve done and support efforts to take us further," he said.

Becerra’s nomination will require confirmation by the Democratic-controlled state Senate and Assembly, and he is expected to easily clear the process.

Once Becerra formally resigns from his Los Angeles-based 34th District seat, Brown will have two weeks to declare a date for the special election and primary to fill the vacant seat. State law requires a general election to take place no more than 140 days after that declaration, with the primary about two months prior.

In California, all candidates compete in a single jungle-style primary regardless of party affiliation, with the top two vote-getters advancing to a general election.

Despite Becerra’s unexpected departure from Capitol Hill — he easily won a 13th term last month — a crowded primary is likely to take shape in the heavily Democratic and majority Latino seat.

"With Rep. Xavier Becerra being appointed to serve as CAs next AG, I am announcing my candidacy to replace him and serve the people of #CD34," Pérez wrote on his Twitter account.

In a more formal statement to The Sacramento Bee, Pérez framed his bid as a challenge to President-elect Donald Trump.

"California needs leadership who will stand up against Donald Trump, but also leadership that will fight for the poor, the middle class, for job creation, and for a vision that can help us win all across the country," he said.

But one would-be candidate ruled himself out for the race yesterday. California Senate President Pro Tem Sen. Kevin de León (D) told the Los Angeles Times that he will not seek to succeed Becerra despite facing state term limits in 2018.

"I look forward to working with him side by side to defend California’s progress every day for the next two years," he told the newspaper.

Democratic Congressional Campaign Committee Chairman Ben Ray Luján (D-N.M.) praised Becerra in a statement but did not discuss the looming race to replace him. The DCCC is unlikely to wade into the contest given Democrats are almost guaranteed to hold the seat.

"I congratulate my friend and colleague Chairman Xavier Becerra on his new appointment as California’s Attorney General. Xavier has been a tremendous voice for the people of Los Angeles and a strong leader for our Party. I know he will bring the same drive and dedication to his new role working for the people of California," Luján said.

Becerra’s ascension to the attorney general’s post could create political opportunities for him down the line, as the job is a major political steppingstone. In addition to Harris’ success in the recent Senate race, four California attorneys general in the past 75 years have been elected governor: Democrats Pat and Jerry Brown, and Republicans George Deukmejian and Earl Warren. The latter went on to become chief justice of the Supreme Court.