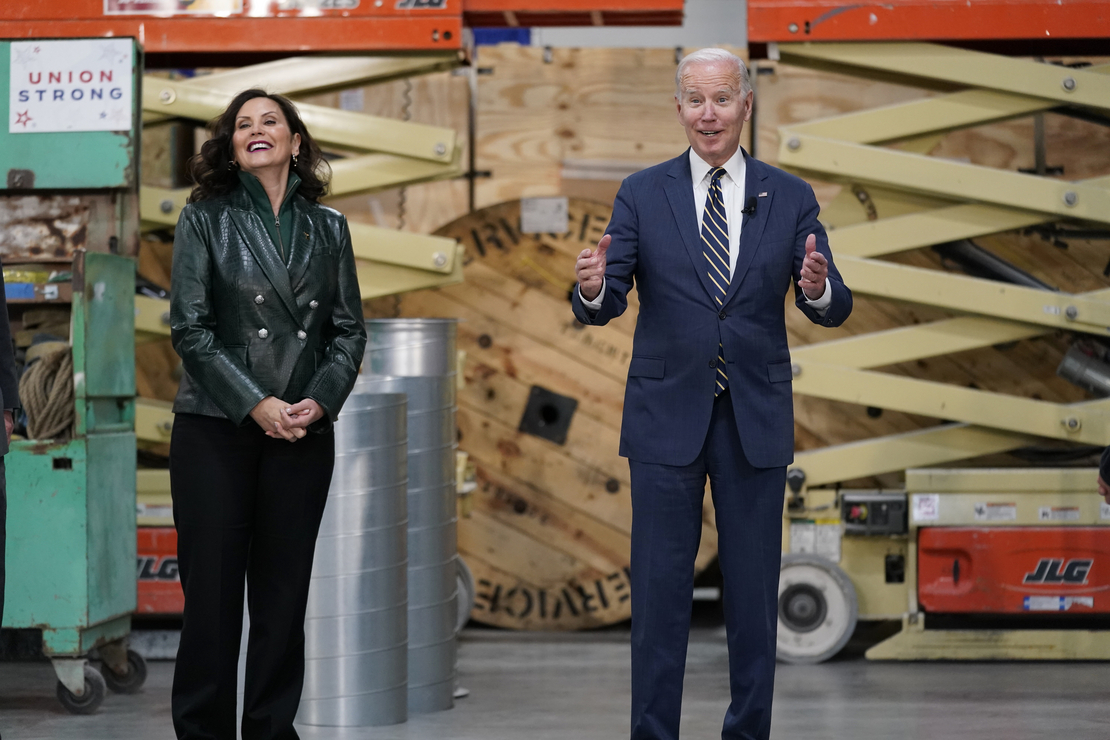 President Joe Biden set out to reframe his economic record Tuesday with a visit to a semiconductor manufacturing plant in Michigan.

He was there to tout a $300 million expansion made possible by funding through this year’s CHIPS and Science bill. But his speech reflected a nuanced pivot in messaging as he enters the next phase of his presidency — one in which Republicans control the House and his chief job is to put past legislative victories into real-world action.

Biden made it clear that the implementation of the Inflation Reduction Act — and its $369 billion in clean energy subsidies — will be a key part of his economic message over the next two years. That law, along with the CHIPS Act and the bipartisan infrastructure law, will revitalize the domestic manufacturing sector for a new purpose, he said: supplying the components for the coming boom in electric vehicles, wind turbines, batteries and other piece of a clean energy future.

“We did so much that no one knows the effects of it yet,” he said to a crowd at the plant, which is owned by South Korean company SK Siltron CSS.

In the past, “we exported more jobs than products,” he added. “Now we’re back in the business of exporting products, not jobs.”

Biden’s visit to Michigan, a crucial swing state that figures prominently in his energy transition strategy, comes as he weighs a run for a second term that would make him the oldest man to ever hold the White House. Though Democrats performed better than predicted in the midterms, high inflation and gas prices continue to dog Biden and his approval ratings.

Whatever his political future, Biden’s biggest climate job now is ensuring administration officials write the rules that decide how the Inflation Reduction Act will be implemented.

“Biden’s role is in helping to highlight what’s really happening on the ground and to help tell that story and highlight the positive and economic health and emissions benefits of all of these policies, so he’s really got his work cut out for him,” O’Boyle said.

The Treasury Department underscored Biden’s message Tuesday with a preview of the tax guidance that companies need to start taking advantage of the Inflation Reduction Act’s subsidies.

The law will hand out billions in subsidies for everything from wind and solar projects to carbon capture facilities and electric vehicles. But to receive the full benefit of those subsidies, companies will need to comply with a series of labor and domestic content provisions. Many clean energy firms have been waiting on the rules before greenlighting new investments (Climatewire, Oct. 27).

The final labor guidance is expected to be published in the Federal Register on Wednesday. That is a crucial step toward implementing a law that analysts predict will result in a massive reduction of greenhouse gas emissions — a point made by administration officials Tuesday.

“We understand that the rules we write hold the key to unlocking the law’s benefits,” Treasury Secretary Janet Yellen told reporters.

The new guidance will rely on existing federal rules established under the Davis-Bacon Act to set prevailing wage levels for clean energy developers in different parts of the country. It will use existing Department of Labor guidelines to establish the job classifications that determine those wage levels. And it uses existing regulations for determining when a project has started and becomes eligible for federal tax incentives.

All those provisions were sought by industry and unions.

Yellen explained the practical impacts of the provisions by pointing to the example of a hypothetical solar developer in North Carolina.

“You now have concrete guidance on how to find those wage rates so as to comply with the inflation Reduction Act requirements for enhanced incentives,” she told reporters.

Those rules are important because the new clean energy subsidies are based on a sliding scale. A renewable energy developer who complies with the prevailing wage requirements will be eligible for a benefit of 2.6 cents per kilowatt-hour, compared to a payment of 0.6 cents per kWh for those that don’t comply.

But in a sign of the type of challenges Biden will face over the next two years, some clean energy interests expressed disappointment with Treasury’s move. The decision to publish the guidance will start the clock on a 60-day period where developers can qualify for the enhanced credit without complying with the labor standards in the bill.

Many companies had initially expected the labor rules to be published early next year, said Lauren Collins, an attorney who represents renewable clients at the law firm Vinson & Elkins LLP. Companies face a significant hurdle in beginning construction imminently — if they want to duck the labor rules — amid supply chain bottlenecks and inflationary pressure.

Collins said she was shocked the administration is moving so quickly.

“People were already scrambling to figure out if they could begin construction before the 60 days. Now, I think it will be impossible for people to do so,” she said. “Maybe that is the intention because they really want people to comply with the labor rules.”