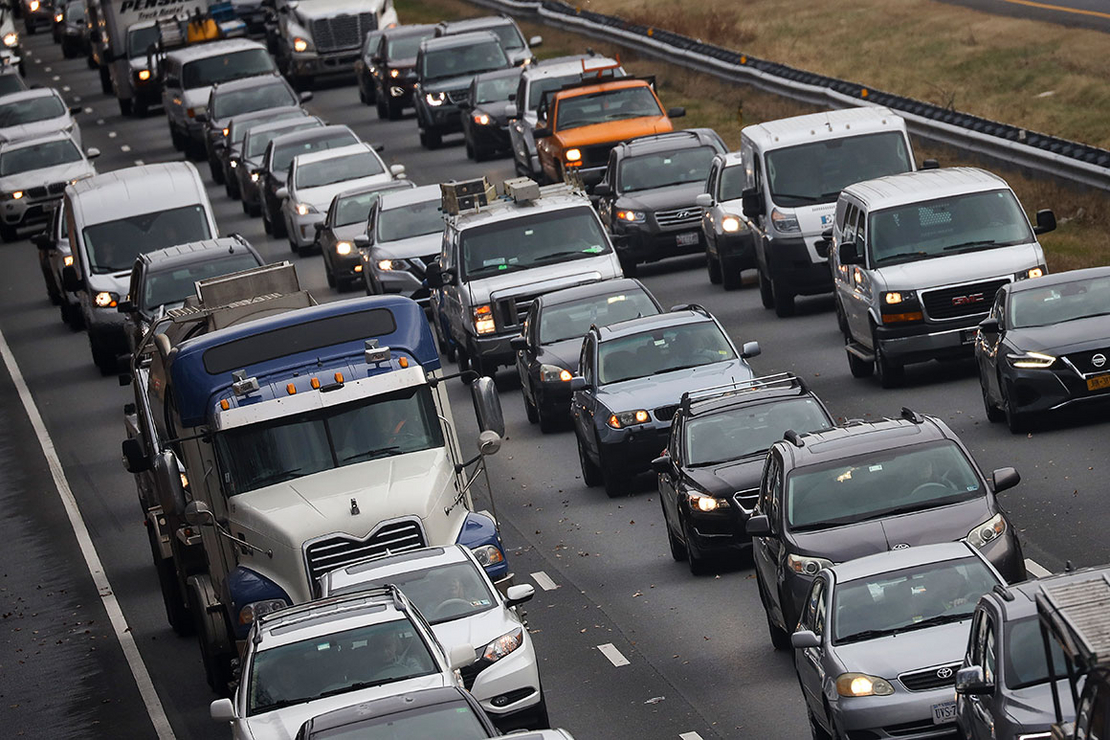 Heavy traffic moves slowly on I-495 the day before Thanksgiving 2019 in Bethesda, Md. The Biden administration is poised to release its proposal for new emission limits for cars. Drew Angerer/Getty Images

The Biden administration is preparing car rules that could eventually surpass Obama-era emissions reductions, but it could take years to achieve those carbon decreases and the rule won’t address tailpipe pollution released under former President Trump, according to sources and news reports.

Critics say that could result in less overall carbon reductions than would have been achieved under the Obama standards during the same time period, raising concerns that the rule could fail to act quickly enough to decarbonize the nation’s largest source of greenhouse gases.

“The West is baking, forests are ablaze, storms are worsening, so this is not the time for weaker standards and promises of doing better tomorrow,” Dan Becker, a transportation expert at the Center for Biological Diversity, said in a statement. “Half steps won’t save us from climate catastrophe.”

Biden’s draft plan, details of which were first reported yesterday by the Associated Press, would incrementally ratchet up fuel efficiency requirements through model year 2026. After that, tougher standards are expected to be implemented under a separate Biden rule, exceeding the carbon reductions that were scheduled to occur under former President Obama’s regulations, which were repealed by Trump.

A former top federal official, who spoke on the condition of anonymity, confirmed to E&E News the broad outlines of President Biden’s draft rule.

When Obama introduced the first clean car standards in 2009, they were the strongest climate rules ever established in the country, requiring the average fuel economy of new vehicles to increase 5% each year, until they reached 51 mpg by 2025.

Biden’s rule would then ramp up requirements in 2025 to Obama-era levels of 5% annual increases in fuel economy.

Biden gave EPA and the Transportation Department a July 2021 deadline to undo Trump’s rollback, but the agencies are expected to miss that deadline. An August rollout is more likely (Climatewire, July 27).

While the rule would eventually hit the annual percentage standards enacted under Obama, it would not make up for efficiency losses under Trump. That means Biden’s rule as drafted would reduce fewer overall emissions than Obama-era regulations, the source said.

A recent report from the American Council for an Energy-Efficient Economy found that the fuel economy of new vehicles must hit 55 mpg by 2026 to meet long-term climate goals.

Richard Revesz, a professor at the New York University School of Law, said the proposal to ramp up annual requirements from 3.7% to 5% positions the administration for future carbon reductions.

“A tightening of the standard over the next few years is productive because it will require a less big leap — a big leap — but a less big leap after 2026,” he said. “Starting there and moving up is in my mind a reasonable approach, but we can’t stop there. We have to keep moving forward.”

The administration is expected to rapidly increase fuel economy requirements after 2026 in order to meet Biden’s goal of decarbonizing the transportation sector. But multiple sources confirmed that would require an additional rulemaking.

“The planet is telling us that the climate crisis is here and our communities are not going to wait two or three years to see the reductions that we knew were achievable during the Obama administration,” said Katherine García, acting director for the Clean Transportation for All Campaign at the Sierra Club.

García said she doesn’t want to speculate about the details of the rule, which could be released as early as next week, but indicated that green groups are beginning to mobilize their members and supporters across the country to fight for tougher standards.

“This is the campaign of our lives,” she said. “This is on the radar of every single environmental, justice, health, faith and consumer group in the country, and we are ready to fight for our future.”

The Center for Biological Diversity is slated to run a full-page ad in The New York Times today picturing a truck reversing off a cliff. The caption reads, “President Biden can set strong clean car standards that protect the climate … or he can hit reverse.”

Becker said green groups don’t usually spend “tens of thousands of dollars” on full-page ads. “So it sends a message that we really care about this,” he said.

“We need to eliminate the tailpipe pollution from new passenger vehicles by 2035 if we hope to curb climate change based on science and help ensure livable communities,” he said in a statement.

The Sierra Club also partnered with the Hip Hop Caucus, Interfaith Power and Light, and the Union of Concerned Scientists earlier this month to host an event titled “Drawing a Green Line,” outlining what a strong rule could look like.

And 30 groups recently sent a letter to federal officials calling for the adoption of tough clean car standards that “maximize pollution reductions” while also charting a path to replace all gas- and diesel-powered vehicles with zero-emissions ones.

“We will continue to battle to make sure the administration toughens their proposal,” Becker said. “Now is not the time for weak rules and there is plenty of time for the president to do the right thing.”