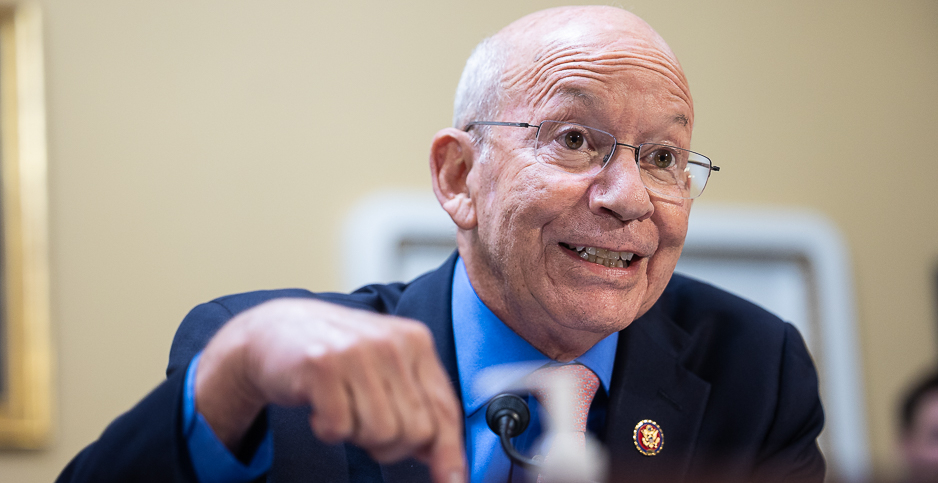 "At every turn the majority has ensured that infrastructure programs become climate change programs," Oklahoma Rep. Tom Cole, the top Republican on the Rules Committee, said as the panel prepared the bill for the floor.

The highway and water bills are the first big infrastructure proposals to hit the House floor. "Unfortunately," said Cole, "this first attempt is a partisan bill and quite a bit lacking."

Today, the Rules Committee will review hundreds of proposed amendments to H.R. 3684, which would allocate $343 billion for roads, bridges and safety, with about $4 billion of that going toward electric vehicle charging infrastructure.

It would slot $109 billion for transit repairs, including to scale up zero-emission vehicles and fleet conversions. It would further designate $95 billion for passenger freight and rail.

The White House released a statement of support, calling the package aligned with the administration’s goals to repair and rebuild aging infrastructure while reducing greenhouse gas emissions and investing in and reconnecting marginalized communities of color.

"H.R. 3684 would reauthorize the U.S. Department of Transportation’s core programs that support investments in roads, bridges, safety, transit, rail, freight, and multimodal projects, and in research and innovation," the White House said. "The bill seeks to modernize and transform these programs with a focus on safety, climate, equity, and good-paying jobs."

In recent weeks, the White House pointed to progress on the highway bill as evidence Congress was acting on the president’s "American Jobs Plan" amid messy negotiations in the Senate.

The administration yesterday also made clear it fully backed provisions to upgrade and modernize water infrastructure and remove lead service lines across the nation.

"The majority is insisting on moving forward with their own partisan and deeply flawed bill, which we now know has no chance of becoming a law as is," Cole said.

"New environmental mandates, Green New Deal-like provisions will snarl construction projects," he said. "Provisions that prioritize mass transit over roads will force rural districts, like my own, to spend funding in ineffective ways rather than on the road improvements we so desperately need."

"This bill is essentially a down payment on fixing our crumbling roads, bridges and highways; it scales up investments in clean energy and zero-emission transit vehicles, and makes bold investments in wastewater and drinking water infrastructure," he said. "I’ve got bridges in my district in Massachusetts that are older than most of your states."

But Transportation and Infrastructure Chair Peter DeFazio (D-Ore.), who had for weeks been swatting aside GOP complaints about partisanship, said it’s time to do away with the status quo.

"We can either lag behind the world and cede yet another evolution in our country of technology and transportation to China and other places, or we can be in the forefront," he said.

DeFazio said simply adding new highways will not help address climate change or the country’s crumbling infrastructure. He said in the last 25 years, 35,000 lane miles have been added in the 100 largest cities.

"That’s an incredible amount of pavement, and congestion is six times worse. It’s time to try something different," he said. "We used to be the envy of the world, now we’ve become the laughingstock."

Language from the House package on the floor this week may end up in a bipartisan infrastructure deal or in a Democrats-only bill approved through budget reconciliation.

DeFazio yesterday joined Rep. Paul Tonko (D-N.Y.) in defending water provisions in the bill against a chorus of Republican assertions that the measure faces opposition from the water industry because it would balloon costs and leave rural areas behind.

Davis said Republican concerns haven’t been heard and warned the process playing out in the House — lengthy markups followed by limited floor debate — is "nothing but political theater." The wastewater bill, for example, turns its back on a previous bipartisan agreement.

McGovern said Democrats are listening to testimony and taking comments, and bills are moving to the floor to be debated. "We should refrain from that kind of characterization," he told Davis.