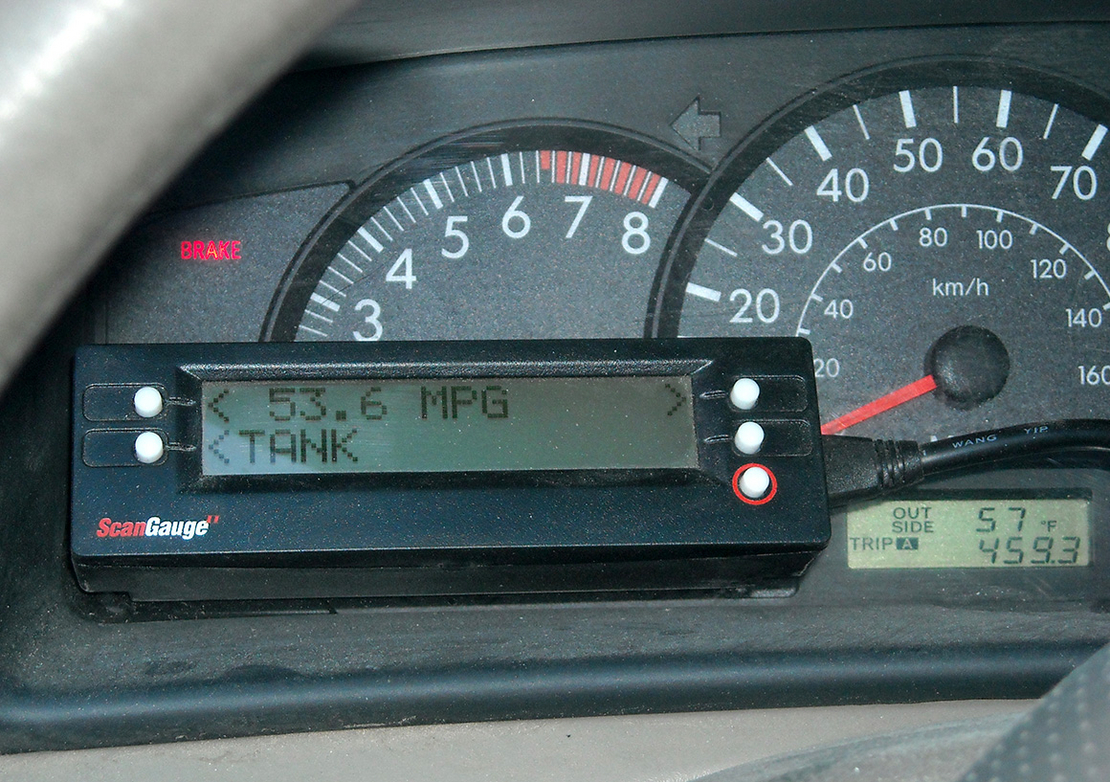 A fuel economy reading in a car. Hadley Paul Garland/Flickr

The Biden administration has proposed requiring carmakers to increase their fuel efficiency by 8% annually for model year 2024 through 2026, which is on par with what EPA has also proposed.

The National Highway Traffic Safety Administration and EPA’s joint rulemaking last week marked a key component of President Biden’s push to slash automobile emissions and accelerate the drive toward electric vehicles. Transportation is the largest source of U.S. greenhouse gases, with cars spewing the bulk of that heat-trapping pollution.

Biden announced his target last week of 50% electric vehicle sales by 2030. EPA also rolled out its corresponding plan, which would increase the average fuel economy of new passenger cars and trucks 10% in 2023 and then 5% each year after that, totaling 25% by model year 2026.

Because of certain legal requirements, NHTSA’s proposal does not include model year 2023, which is why the percentage increase differs from the EPA rule. The overall savings, however, would be the same, analysts agreed.

“The agencies were considering the same range of standards and settled on the same proposed target within their respective lanes,” said Dave Cooke, a senior vehicles analyst at the Union of Concerned Scientists. “They end up in the same place in 2026.”

The joint proposal marks a significant increase from the 1.5% fuel-economy gain imposed by the Trump administration, although it is still less than what many environmentalists would have liked.

“These are not up to what the climate demands,” said Dan Becker, director of the Safe Climate Transport Campaign at the Center for Biological Diversity. “Telling them to go back to the drawing board at this point isn’t going to happen. At a minimum they should toughen up the strongest proposal that they’ve analyzed.”

Both EPA and NHTSA’s proposals consider a range of regulatory alternatives, including a more stringent requirement that analysts say would restore Obama-era standards.

Under the Obama administration, automakers were required to raise fuel economy 5% a year through 2025. But President Trump reduced that rate to 1.5% annually through 2026. Trump also repealed California’s legal authority to set its own standards, which the Biden administration is working to restore.

The weaker alternative considered in the proposal is based on a framework California agreed to in 2019 with five automakers — Ford Motor Co., BMW AG, Honda Motor Co., Volkswagen AG and Volvo Group — which would increase miles per gallon by 3.7% a year.

“Our proposal reduces climate pollution by approximately the same amount as if we took more than 5 million of today’s vehicles off the road, while also saving Americans money at the pump,” said acting NHTSA Administrator Steven Cliff. “This is important for the climate and also for public health.”

Cliff said the new standards would also save consumers close to $140 billion for new vehicles sold by 2030 and $470 billion by midcentury, while also cutting greenhouse gas emissions and reducing the country’s dependence on oil.

EPA is slated to host a hearing to consider the proposal on Aug. 25 and is accepting comments through Sept. 27. NHTSA will take comments on its proposal for 60 days. A final rule is expected by the end of the year.