Biden is set to restore monuments. What happens next? 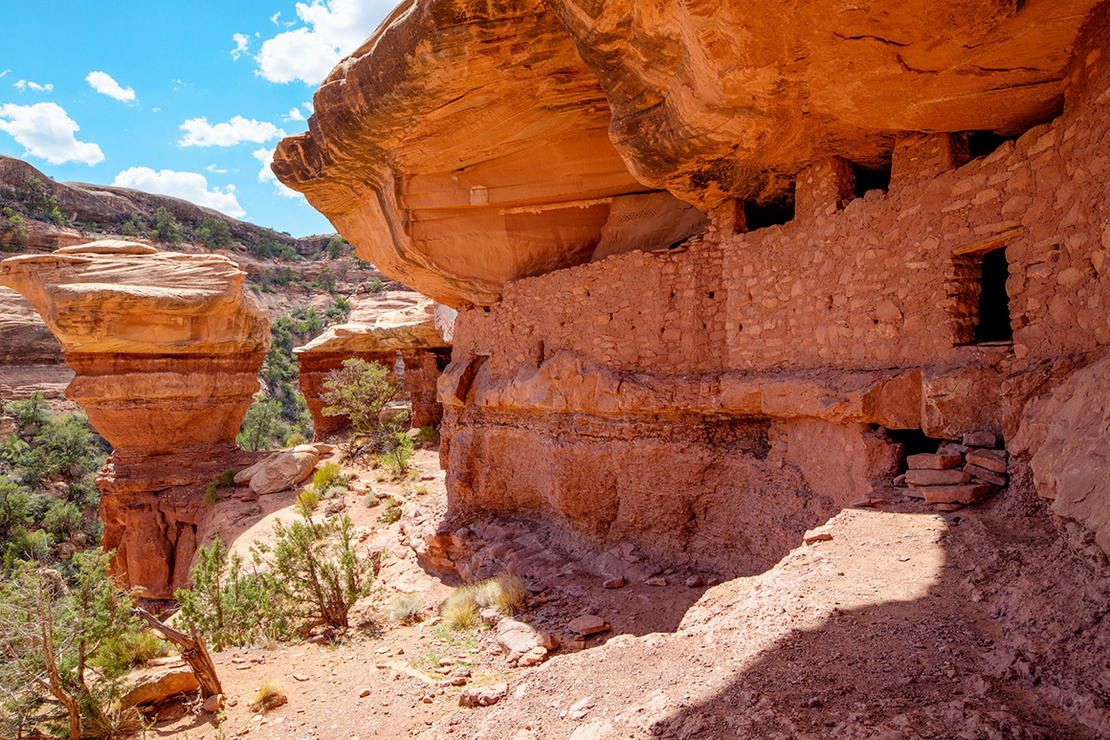 The Moon House at Bears Ears National Monument, one of the most prized of the site’s ancient cliff dwellings. Bob Wick/Bureau of Land Management/Flickr

As tribal leaders and environmentalists celebrate President Biden’s scheduled restoration today of more than 2 million acres of public lands to a pair of Utah monuments, activists stress that the pomp and circumstance is a precursor to extensive work that remains to be done to shore up those sites.

Biden is scheduled this afternoon to sign new proclamations, which have yet to be published, restoring millions of acres to both Grand Staircase-Escalante and Bears Ears national monuments.

The action will reverse cuts President Trump made in 2017 at the behest of GOP lawmakers who had long criticized the monuments as a form of federal overreach by the Democratic presidents who established them.

It will also restore protections to the marine monument that Trump removed in 2020, opening the 5,000-square-mile site about 130 miles off the coast of Cape Cod, Mass., to commercial interests.

"That is our life in a living classroom," said Lee, who heads one of the tribal coalitions that advocated for the monument’s creation. "Our children and grandchildren need to learn and know about this. This is where they came from. It’s of the utmost importance that we continue to preserve that."

Under the new proclamation, the Bears Ears site will occupy 1.36 million acres, slightly larger than it was after President Obama’s establishment of the site in 2016.

Trump’s proclamation shrank Bears Ears from 1.35 million acres to about 202,000 acres, splitting the site into two units. It also included a small 11,200-acre addition that will be retained under the new proclamation.

Among the first steps for both Bears Ears and Grand Staircase-Escalante national monuments will be the creation of new resource management plans.

Steve Bloch, the legal director for Southern Utah Wilderness Alliance, said it will be vital for the Biden administration to emphasize that it is managing the lands "to a much higher standard" than its predecessors.

"This is a long time coming for one of the most remarkable stretches of public land in the United States," Bloch said, referring to the Grand Staircase-Escalante site. "It’s hard to imagine a more remote, austere landscape in the country, and it has suffered over the past four years, and seeing it restored … is incredibly important."

The Grand Staircase-Escalante monument is overseen by the Bureau of Land Management, while the Bears Ears site is split between BLM and the Forest Service.

Bloch added: "The public lands within the monument boundaries are to be managed to preserve and protect the monument objects, which will run from sacred sites to paleontological resources to the ecosystem itself, and every decision the Bureau of Land Management makes about this place needs to prioritize the protection of those resources, and that has been lost in the shuffle."

Trump excised about half of the Grand Staircase-Escalante monument, slicing its 1.9-million-acre footprint. Biden will restore the monument to its boundaries as they existed on Jan. 20, 2017, the day Trump took office.

Mitigation efforts will be required for damage to Grand Staircase-Escalante acreage caused by mining claims for alabaster, motor vehicle use and vegetation removal, Bloch explained.

"We were fortunate that there were not as many mining claims located as we feared, which speaks more to the very speculative nature of mineral resources in the monument, but there is some cleanup that has to happen," he said.

The National Parks Conservation Association’s Kristen Brengel added that "cultural resources management" will be key to Bears Ears, to guard against the destruction of pottery and other artifacts in the site that was once home to numerous Native American tribes.

The Biden administration has also vowed to add additional BLM rangers to the monument and add new signage and infrastructure to support increased visitation to the area.

Brengel noted interpretation is key to "make sure folks understand they’re on a landscape that is very sacred, and to respect anything they see on the landscape and to leave it there for other people to see."

She added: "Having the presence of rangers to educate visitors is paramount to keeping these places protected."

The Bears Ears Inter-Tribal Coalition, which played a key role in the monument’s 2016 creation, also pointed to the importance of implementing "a new model of collaborative management" for the site.

Coalition leaders said details of that arrangement should be included in the president’s proclamation, and will be expanded in the new management plan.

"In this new model, the traditional knowledge and place-based conservation strategies of tribal communities will play a significant role in shaping efforts to conserve and plan a resilient future for this landscape that we all hold dear," the coalition said in a statement.

"We’re still planning to work towards that," Lee said, adding that if given a chance to speak to Biden at today’s event, he plans to press for the expansion in person.

"This is the first time that a monument has been created from the voices of the grass roots, from the people," Lee added, referring to the monument’s status as the first such site designated at the request of tribal nations.

The Beehive State’s all-GOP congressional delegation had pressed the White House to postpone executive action in favor of a legislative solution.

But Utah Rep. John Curtis (R), whose 3rd District includes the Bear Ears site, told E&E News that those efforts, including his own draft bill, are now dead on arrival (Greenwire, March 9).

"It kills it. There’s no motivation for the tribes now to work with me," Curtis said, adding that he will continue to work on the proposal. "It’s unfortunate because it’s a short-term victory for them."

GOP lawmakers have argued that barring legislation, the monument’s boundaries are likely to shrink back when a Republican returns to the White House.

Utah lawmakers have long criticized both the Bears Ears and Grand Staircase-Escalante sites as too large, asserting the monuments violate the Antiquities Act provisions about size.

Federal courts, however, have long sided with presidents on their designation of national monuments, including a 1997 challenge against President Clinton’s original designation of Grand Staircase-Escalante (Greenwire, March 16, 2018).

But Ute Indian Tribe Business Committee Chair Shaun Chapoose, a member of the Bears Ears Inter-Tribal Coalition, dismissed Curtis’ argument that tribal leaders would walk away from legislative efforts — asserting any foot-dragging has been on the part of lawmakers themselves.

"The tribes were willing to work with Congress to begin with. I don’t think that’s ever been taken off the table," Chapoose said.

The Bears Ears Inter-Tribal Coalition represents the Navajo Nation and Pueblo of Zuni, as well as the Hopi, Ute Mountain Ute and Ute Indian tribes.

Chapoose noted the dearth of legislative proposals since 2017, aside from a widely panned bill that Curtis introduced to codify Trump’s boundary changes.

"When it came to the state delegation, they would try consultation and legislation when the news cycle needed it, but in between, they were never to be found. Maybe it will motivate them to follow through rather than give lip service."

Ocean conservation activists praised Biden’s announcement that he would restore commercial fishing restrictions within the Northeast Canyons and Seamounts monument, and retain a sunset provision to end fishing for red crab and American lobster by September 2023.

"The area is vulnerable to fishing from seafloor all the way up to the surface. The surveys from the scientists have seen this is a biodiverse area that is worthy of protection," explained Oceana Senior Campaign Manager Gib Brogan.

Activists had raised concerns that Biden would restart the clock for red crab and American lobster fishing, Brogan added.

"Every time the fisherman are in there putting their traps on these coral gardens, it is more risk to those corals that can be thousands of years old," he said.

Although the New England Fishery Management Council implemented protections for deep-sea corals in more than 80 percent of the monuments in 2020, Brogan said the monument provisions offer more permanent protection for the site.

But Saving Seafood Executive Director Bob Vanasse criticized the Biden administration’s decision for allowing recreational fishing to continue in the area, even as members of his industry advocacy group are locked out.

"While the Biden-Harris administration has claimed decisions will be based on science, and not on who has the stronger lobby, this decision shows otherwise," Vanasse said.

“Prohibiting hardworking commercial fishermen from sustainably harvesting while allowing owners of luxury yachts to spear fish for the same species in the same location is hypocritical and calls into question this administration‘s commitment to working families over wealthy donors," he added.

The Biden administration asserts the Atlantic monument includes important habitat for whales and other marine mammals, as well as hosting dozens of deep-sea coral species.