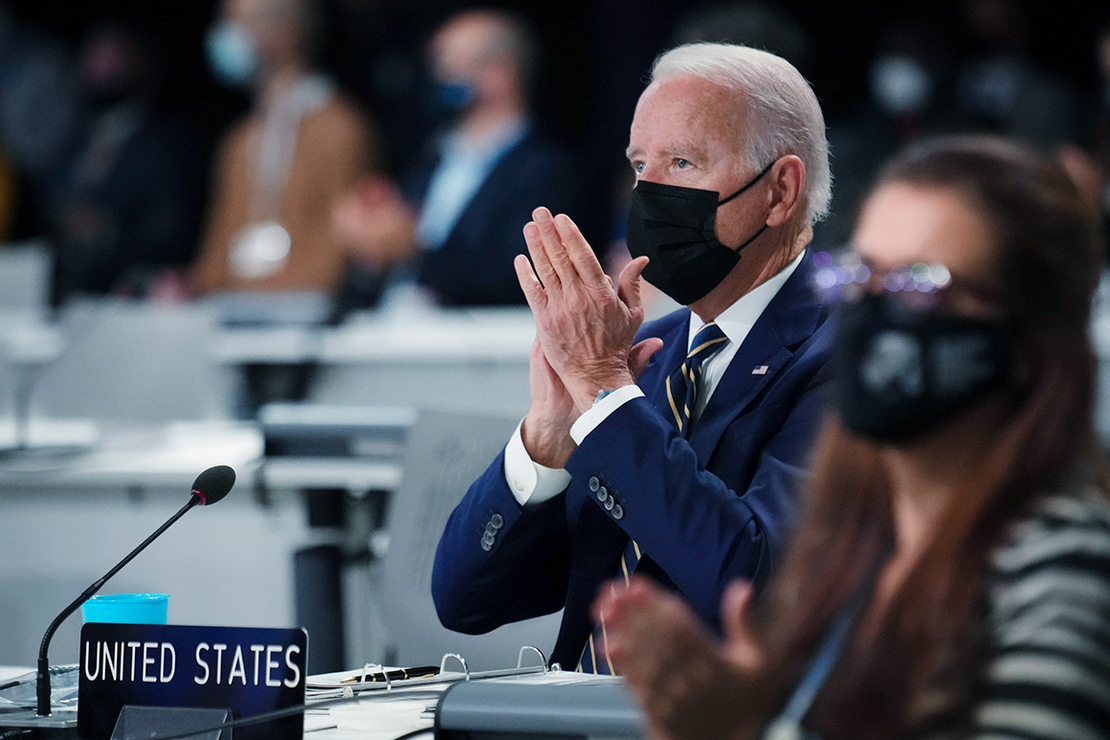 President Biden made his bid today to reclaim U.S. climate leadership on the world stage, even as his legislative and regulatory agendas to rein in heat-trapping emissions hit headwinds back home.

Speaking at his second high-level summit in as many days, Biden told world leaders at a key climate conference in Glasgow, Scotland, that his administration “would demonstrate to the world that the United States is not only back at the table but hopefully leading by the power of our example.”

“I know it hasn’t been the case,” said Biden, in an allusion to the U.S. withdrawal from the Paris Agreement under his predecessor, President Trump. “And that’s why my administration is working overtime to show that our climate commitment is action, not words.”

Biden in April rolled out a new Paris Agreement pledge calling for the U.S. to cut greenhouse gas emissions by 50 to 52 percent below 2005 levels by 2030 economywide. The administration has yet to say how it plans to meet such an ambitious reduction target.

But Biden, in a 10-minute address to the U.N. climate conference known as COP 26, promised more details in the coming days that would “demonstrate our commitment to providing innovative solutions across multiple sectors.”

The upcoming announcements, he said, would address emissions from oil and natural gas, agriculture, deforestation, and the industrial sector.

Sometimes seeming to grasp at words, Biden promised the assembly that the U.S. plan would include both a “short-term sprint toward 2030 that will keep 1.5 degrees Celsius in reach” and a “marathon” that would deliver the 2050 decarbonization goal.

The 1.5 C goal is the most ambitious target mentioned in the Paris Agreement. The world’s top scientists in 2018 warned that it represents the upper limit at which global warming’s worst impacts — from catastrophic sea-level rise to damaging droughts and floods — could be avoided.

They also warned that holding to that limit would require the world to halve emissions by the end of this decade. Biden’s Paris pledge tracks with that goal, but his administration has yet to say how it plans to deliver on it.

When the White House unveiled the pledge ahead of the president’s Earth Day summit in April, it promised a national climate strategy would be released by year’s end that would fill in some of those details.

The White House rolled out several reports to the U.N. climate body today, including its so-called long-term strategy, which details assumptions and “pathways” that will allow the world’s largest historic emitter to stop adding to atmospheric greenhouse gases by no later than 29 years from now. The report mentions that the national climate strategy would be “forthcoming” and “describes an overarching approach that covers all aspects of federal action, which will also support broader non-federal and all-of-society efforts.”

Both the coming policy road map and the 2050 strategy were “informed by a robust stakeholder engagement process,” states the report, which is signed by White House domestic climate lead Gina McCarthy and U.S. climate envoy John Kerry.

The long-term strategy, or LTS, provides a sketch for how the U.S. foresees meeting its 2030 and 2050 goals, focusing on sector shifts rather than the federal and state policies that would support them.

Using two peer-reviewed models maintained by the U.S. government, it assumes steep near-term cuts in emissions from the power and transportation sectors through the Biden administration’s 2035 power sector decarbonization target, and his commitment that half of all light-duty vehicles sold in the U.S. would be non-emitting by 2030, among other goals.

The industrial and building sectors would follow with steep cuts made later in the decade. The LTS also assumes that carbon dioxide removal technologies would take off after 2040, “using processes and technologies that are rigorously evaluated and validated.”

“This requires scaling up land carbon sinks as well as engineered strategies,” the LTS states.

Biden’s visit to Glasgow comes after yesterday’s Group of 20 summit in Rome, where the leaders of the world’s 20 largest developed and developing countries reaffirmed the objectives of the 2015 Paris deal and reached consensus on ending overseas financing for new coal projects. But other objectives, like a commitment on domestic coal use, remained elusive.

Biden used his Glasgow remarks to tout his Build Back Better agenda. But congressional Democrats struggling to pass a massive climate and social spending package this week have abandoned plans for a $150 billion incentive program that would have helped deliver Biden’s goal of a carbon-neutral power grid by 2035. More than $550 billion in clean energy and carbon-reduction incentives are still part of the debate, but the fate of the package is still up in the air.

The president’s remarks also follow the announcement Friday that the Supreme Court would hear a challenge by Republican states aimed at limiting EPA’s authority to reduce power sector carbon through regulation.

Biden administration officials have sometimes downplayed the role the Democrats’ budget reconciliation bill would play in delivering Biden’s climate objectives. But in a call with reporters yesterday, McCarthy called the budget “framework” she helped negotiate “one of the most significant and most engaging moments in my lifetime.” Even in its current form, the bill would be the largest climate spending bill in U.S. history.

Biden’s reference to a new oil and gas initiative might pertain to proposed EPA rules for oil and gas methane that are expected to be released this week — perhaps in conjunction with the COP 26 “methane day” tomorrow.