Biden on Russian pipeline: ‘We will bring it to an end’ 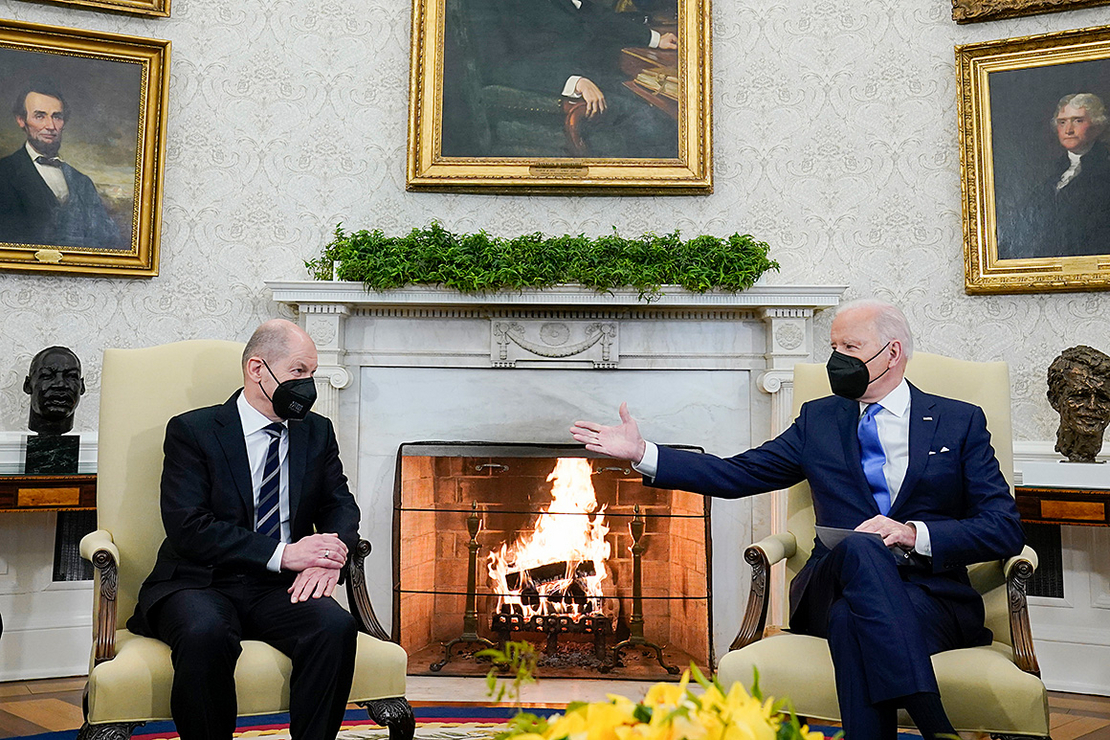 President Biden gestures during a meeting yesterday with German Chancellor Olaf Scholz in the Oval Office of the White House. AP Photo/Alex Brandon

The United States and its allies would block the operation of a major gas pipeline to Europe if Russia invades Ukraine, President Biden vowed yesterday during a White House meeting with German Chancellor Olaf Scholz.

The Nord Stream 2 pipeline recently completed construction and is scheduled to bring Russian gas to Germany through the Baltic Sea.

“If Russia invades — that means tanks or troops crossing the border of Ukraine again — then there will no longer be a Nord Stream 2,” Biden said at a press conference with Scholz. “We will bring an end to it.”

Scholz said Germany and the United States would move in lockstep if Russian President Vladimir Putin attacks Ukraine. Russia has spent months amassing heavy equipment, troops and weapons at the border, but has not yet committed to an invasion.

“We are acting together, we are absolutely united,” Scholz said. “We are not taking different steps.”

Despite being pressed by reporters for details, Scholz would not specify what he meant by those comments, which were a repeat of his recent public statements about Nord Stream 2.

Biden did not say how he would shut down the Nord Stream 2 pipeline, which is not yet online.

In May, Biden weakened sanctions on the Nord Stream 2 pipeline. During the Trump administration, the United States sanctioned and blocked economic activity with firms and individuals connected to the construction of the pipeline. In July, the Biden administration cut a deal with Germany to lift those sanctions and allow the pipeline to proceed.

Since then, Biden has been criticized by both liberals and conservatives for his Nord Stream 2 position. While the pipeline would help bolster European gas demand, some U.S. officials worry that a growing dependence on Russian gas increases Moscow’s influence over Europe.

Conservatives such as Sen. Ted Cruz (R-Texas) have framed the White House’s unwillingness to stop the pipeline from operating as a sign Biden is being too weak on Putin. Republican senators last year held up Biden’s foreign policy nominees and threatened a rejection of the defense spending bill over the pipeline, which was largely built during the Trump administration.

Biden also has taken heat from the left; progressives see the Nord Stream 2 pipeline as contradictory to his climate ambitions. Biden has faced criticism, too, from moderate Democrats such as Sen. Bob Menendez (D-N.J.), the chairman of the Senate Foreign Relations Committee. Menendez said the pipeline would “give Russia yet another tool to pressure and blackmail Ukraine.”

Biden said yesterday that Germany and the United States were working to bring in more gas supplies — including liquefied natural gas — some of which likely would come from the United States. He said Russia’s economy is largely based on fossil fuel production so Putin can’t afford to lose the opportunity to bring more gas into the world market.

“We’re looking into making up for lost gas from Russia,” Biden said. “We think we can make up a significant portion of it. What everyone forgets here is Russia needs to sell that gas. If that’s cut off, they’re going to be hurt very badly as well.”

Scholz said natural gas comprises about a quarter of Germany’s energy mix, and that Norway and the Netherlands feed the bulk of that gas supply, not Russia. But production from those gas fields has been declining, raising concerns that Germany’s dependence on Russian gas would grow in the absence of alternatives (Climatewire, Feb. 7).

In addition, Scholz said Germany’s climate policy would curtail its reliance on gas in the coming decades as it shifts toward renewables. He said his county would “phase out oil and gas very soon” and that by 2045, it would have a carbon-neutral economy.

“There are some who should be concerned who see themselves too much as a deliverer of resources,” he said of Putin.

Europe as a whole is using the situation to engage in deeper discussions about its energy security now and in the future.

European officials doubled down on their support for a clean energy transition at the start of talks yesterday with their U.S. counterparts.

The meeting of the U.S.-E.U. Energy Council comes as the possible invasion of Ukraine threatens imports of Russian gas at a time when stores of the fuel are dwindling.

In a joint statement, the European Union and the United States said they discussed ways to bolster liquefied natural gas supplies in the short term to offset a potential pipeline disruption as Europe and its neighbors shift away from fossil fuels.

“In the medium term, there is the climate neutrality. In the short term, it’s security of supplies of gas. Both things go together,” Josep Borrell, vice president of the European Commission, said in remarks to reporters. “We need to face the current situation in the eastern border keeping in mind the purpose of decarbonizing our energy mix, because the only lasting solution to energy resilience, security, is going from fossil fuels to renewables.”

The council also said it supported the exploration of new gas transit routes from the E.U. to Ukraine to help it integrate into Europe’s energy market.

The Energy Council meeting was the first since 2018, and yesterday’s message builds on ajoint statement last month from Biden and European Commission President Ursula von der Leyen. Their message sought to solidify “continued, sufficient, and timely supply of natural gas to the EU” to avoid potential supply shocks from a Russian invasion of Ukraine.

The United States has ramped up supplies of LNG to Europe in recent months, currently making it the continent’s largest supplier. European Commissioner for Energy Kadri Simson said the council meeting would identify ways to sustain those exports in the coming months.

U.S. and European officials also said they agreed to cooperate more closely on ways to reduce methane emissions and build out support for hydrogen development — something Europe sees as accelerating its shift away from coal and natural gas.

“I think that our starting point today is that clean energy transition is now irreversible,” Borrell said.