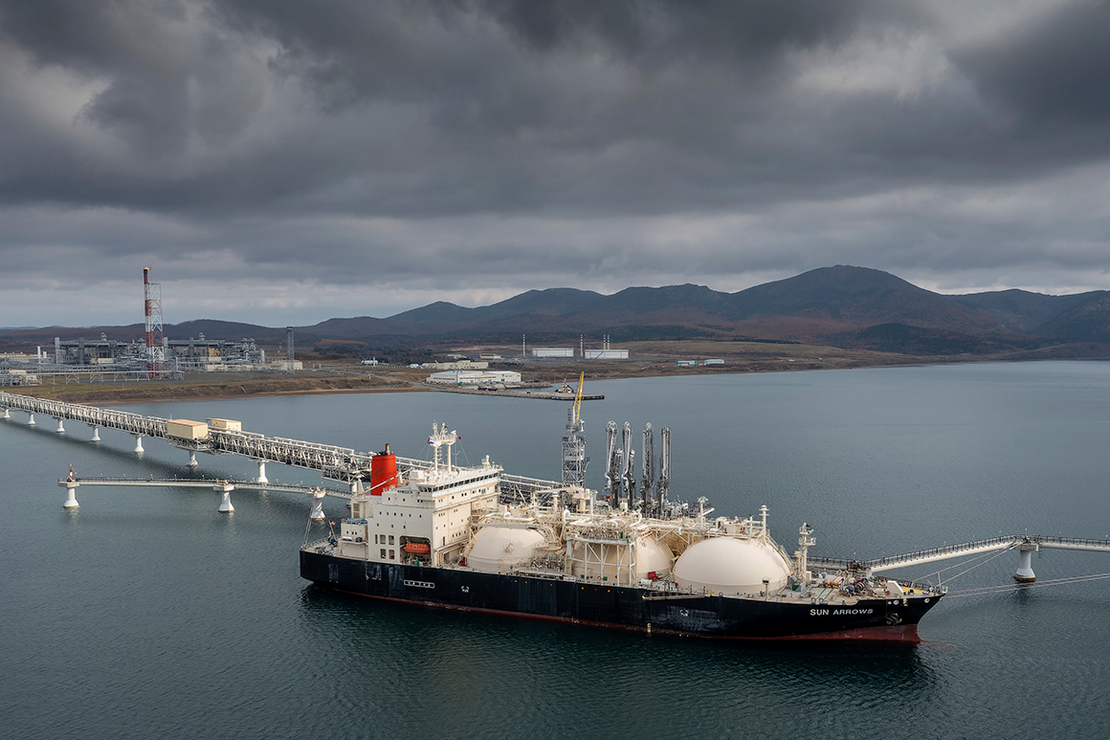 The tanker Sun Arrows loading its cargo of liquefied natural gas from the Sakhalin-2 project in the port of Prigorodnoye, Russia, in October. AP Photo

Rising natural gas prices and hair-trigger tensions between Russia and Ukraine are forcing Europe to grapple with tough questions about the pace of its energy transition.

Europe depends on Russia for more than a third of its gas needs, but Moscow’s aggression toward Ukraine has stoked fears about interruptions in gas deliveries if the military conflict escalates into all-out war. That has forced European leaders to confront the continent’s growing reliance on Russian gas imports to generate electricity, heat homes and power the industrial sector.

The crisis arrives as Europe attempts to plot a path toward a greener future. Many European countries have moved to shutter coal plants and build wind and solar facilities in recent years to slow their upward emissions trend. But gas is still needed because there aren’t enough renewable generation sources to replace fossil fuels.

“I think Europe is seeing that it’s very hard to shut down coal and in some places nuclear and then not have gas go up,” said Stefan Ulrich, a European gas associate at BloombergNEF. “Even with the strong renewable build-out we’ve seen in Europe, especially during the winter you need that thermal generation to meet your energy demand.”

Analysts say the conflict has exposed the volatility of gas imports and punctuated the fuel’s importance in helping Europe move from coal to renewable energy.

“It very much puts the issue of European energy security back into this discussion around energy transition,” Ulrich added.

The crisis might push European countries to make their transition to clean energy more quickly, some analysts said. And some European officials have doubled down on their support for the shift.

“The current situation underlines again that the clean energy transition is the only way forward: the challenges we are facing now are the result of our dependency on fossil fuels — in particular on Russian gas. The answer is more green energy, not less,” Kadri Simson, the European commissioner for energy, said in emailed comments to E&E News. She’ll be in Washington this week to discuss energy cooperation, security and decarbonization during meetings with the U.S.-E.U. Energy Council.

In the short term, Europe’s options for ramping up gas production and imports to bolster fuel supplies are limited.

In the past, much of the continent received gas from the North Sea, off the coasts of Norway and the United Kingdom, and from the Groningen gas field in the Netherlands. But production in both regions has been in steady decline. The Dutch government had been planning to close its field this year after a series of gas-induced earthquakes, but is considering a short-term increase in production over the first half of 2022.

So Europe has turned to Russia for gas imports via pipeline, as well as shipments of liquefied natural gas, said Ira Joseph, who tracks the gas industry at S&P Global Platts.

Relying on imports worked for most of the last decade, but Europe ran into trouble in 2021.

At the same time, Russian imports to the European Union fell 3 percent in 2021. That figure belies a supply plunge in the final three months of last year: Russian gas imports fell 25 percent over that time. The falloff occurred as Russian gas production grew 10 percent in 2021, prompting criticism that Russia was withholding gas as it encircled Ukraine with troops and armaments.

The question now is whether Russia will turn off its gas to the West in retaliation for European sanctions over Ukraine. And that leads to another question: Should Europe accelerate its planning for a future without Russian gas?

Bruegel, a Brussels-based think tank, reckons Europe could survive a large-scale disruption in gas supplies this winter if E.0.U countries shared resources and developed a plan to limit electricity demand.

“The question about what does this mean for the longer-term development of Europe’s energy system is extremely relevant because we might have a situation that requires us to do things in the short term that are not leading to the long-term path that we envisaged for the energy system here,” said Georg Zachmann, a senior fellow at Bruegel.

A big part of the problem is technical. LNG capacity worldwide is already operating at historic highs, and it will be difficult to squeeze additional shipments out of the system. During a crisis, LNG can’t be rerouted quickly, and cargoes are often under long-term contract.

Europe also doesn’t have the infrastructure capacity to handle much higher gas volumes, so short-term supply spurts could lead to bottlenecks. In order to receive and transport more gas, Europe would have to invest in new infrastructure, say analysts.

The Iberian Peninsula in southwestern Europe, for instance, boasts major LNG facilities capable of regasifying the liquid cargo carried in massive tankers. But there is limited pipeline capacity between those countries and Germany, Europe’s largest economy and biggest gas consumer.

Remove Russia and the question becomes: “Do we build additional infrastructure that is just there to replace Russia and for a shrinking gas market that is supposed to fall to zero in the next two decades?” said Zachmann, of Bruegel.

Investing in new infrastructure risks being an expensive, and short-lived, response, given the European Union’s goal of reaching carbon neutrality by 2050. It could also dent the bloc’s commitment to the Paris Agreement by potentially locking in decades of new emissions. At the same time, the European Commission is moving to classify some gas as climate-friendly under the European Union’s guidelines for sustainable investing, potentially opening the door to new gas investments.

Many analysts doubt Putin would order a full-scale gas shut-off. Russia’s economy is reliant on oil and gas exports, and shutting down those deliveries could deplete Russian tax revenue and damage its reputation as a fuel supplier.

A more likely outcome is a continuation of the present situation, in which Russia has fulfilled its long-term supply obligations while curtailing spot market sales.

That would still leave Europe scrambling for gas.

The impacts would vary by country. Italy, for example, relies heavily on gas for power production, though it maintains a strategic gas reserve that offers a degree of protection in the current crisis. France relies mainly on nuclear power for power generation, but it is highly sensitive to energy price increases.

Europe and Russia have reasons to find a compromise, analysts say. One solution may be for Europe to sign the type of long-term purchase contracts that Russia has long sought, said Joseph, the S&P analyst.

Germany, in particular, has viewed its energy trade with Russia as a way of mitigating Russian aggression, said Michael Mehling, deputy director of the Center for Energy and Environmental Policy Research at the Massachusetts Institute for Technology.

A long line of German leaders have reasoned that Russia is less likely to invade a key trading partner, and the two have a long history of doing business. Germany has pursued a new gas pipeline to Russia, Nord Stream 2, over the objections of the United States, which is wary of Europe’s growing reliance on Russian gas. American gas exporters are also eager to sell more LNG to European markets.

The European Union is unlikely to back away from Russian gas supplies entirely, analysts say. Instead, the current crunch could push Europe to scale up renewable energy faster than it already is.

“It would not have happened if there were more renewables,” said Zachmann of Bruegel.“And therefore the direction of travel Europe chose is the right one. We should have only gone faster and further.”

Doubling down on renewables

The European Union is bound by law to cut its greenhouse gas emissions 55 percent by 2030, and the European Commission is currently negotiating legislation that would transform the region’s economy in an effort to achieve those climate targets (Climatewire, July 15, 2021).

But high energy prices — and the squeeze they’re putting on consumers and industry — have stirred criticism about the European Union’s push for a fast transition away from fossil fuels.

Poland recently argued that the European Green Deal, which sets targets for things like energy efficiency and the use of renewables, is raising energy prices.

European Commission climate chief Frans Timmermans sought to dispel those claims and doubled down on the call for increased investments in clean energy as a way to wean Europe off its dependence on Russian gas (Climatewire, Jan. 24). Other officials have also provided assurances that they’re committed to the transition.

“The Green Deal was our top agenda from the very beginning,” said Virginijus Sinkevicius, the European commissioner for the environment, oceans and fisheries, during a visit to Washington last week. What’s happening now with Ukraine and Europe’s gas dependence on Russia, he said, “only reiterates that we need to foster our transition to renewable energy.”

The United Kingdom and Germany, once major coal burners, have committed to phasing out the fuel in coming years. And skyrocketing carbon allowances in the European Union’s cap-and-trade system mean it will be difficult for coal to stage a comeback, analysts said.

“Coal doesn’t have a very significant future in Europe, and that has nothing to do with today’s crisis or today’s situation,” said Victoria Zaretskaya, a research analyst at the U.S. Energy Information Administration.

There are other areas where climate action has already achieved momentum in Europe.

Courts of law in the Netherlands and Germany have ruled that those countries are obligated to act on climate. Many of Europe’s leaders have put an emphasis on climate as part of their policy agendas. Germany made the climate issue a centerpiece of its presidency of the Group of Seven nations.

How far and how fast the continent is prepared to go, however, is an open question.

“The answer is not whether it is feasible,” said Mehling of MIT. “It is how fast and thus how expensive.”