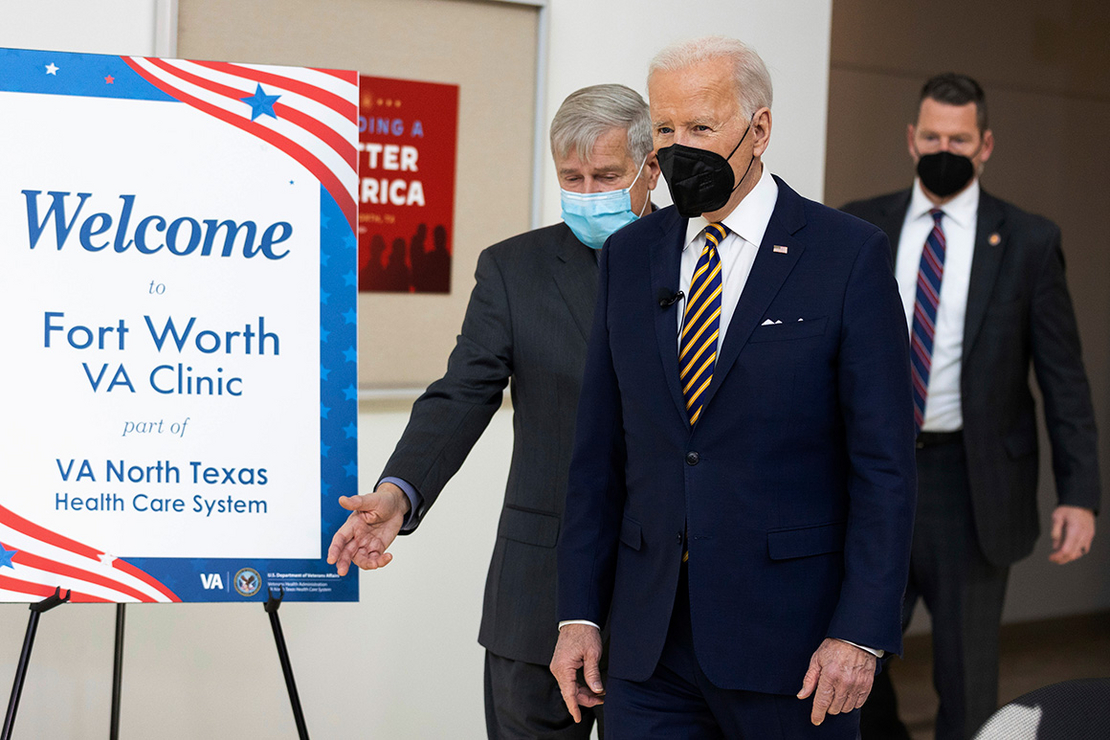 President Biden walks in for a tour at a VA clinic yesterday in Fort Worth, Texas. Biden said U.S. veterans were the “backbone, the spine, the sinew” of the nation, as he pushed for better help for members of the military who face health problems, including after exposure to burn pits. Yffy Yossifor/Star-Telegram via AP

Throughout the Iraq and Afghan wars, soldiers disposed of waste, including tires, jet fuel and human feces, by burning it in giant holes in the ground that were often as large as football fields. Once alight, the trash released fine particulate matter and other harmful chemicals like dioxin that nearby service members inhaled. The Department of Veterans Affairs estimates some 3.5 million veterans were exposed to the burn pit fumes, and many returned home from war suffering from rare lung diseases and cancers.

Still, the Department of Veterans Affairs was reluctant to acknowledge links between burn pits and health conditions until Biden took office (Greenwire, Nov. 11, 2021). In just the past couple of months, the department has given 13 conditions “presumptive” status, allowing affected veterans and their families to receive health care and after-life benefits (E&E News PM, March 1).

Speaking yesterday before an audience of 150 people, including veterans, Biden likened burn pit exposure during modern wars to Agent Orange exposure during the Vietnam War. The highly toxic defoliant was sprayed over Vietnam’s jungles during that conflict, and decades later was linked to Parkinson’s disease and several forms of cancer, including bladder cancer.

“We learned a horrible lesson after Vietnam because then the veteran had to prove that whatever his problem was, it was directly a consequence of Agent Orange,” said Biden, who as a senator in 1991 co-sponsored legislation that designated a range of health conditions as linked to military exposures. “I refuse to repeat the mistake when it comes to veterans of our Iraq and Afghan wars.”

During his speech, Biden pushed for Congress to pass the “Honoring our PACT Act,” H.R. 3967, which would grant an additional 23 conditions, including rare brain cancers and additional lung diseases, presumptive status.

The bipartisan legislation passed the House last week in a 256-174 vote after Republican leaders, including Minority Leader Kevin McCarthy (R-Calif.), balked at the bill’s $250 billion price tag (E&E News PM, March 3). Veterans groups are pushing for the Senate to take up the “PACT Act,” rather than stick to another bipartisan bill that would only extend the eligibility period for burn-pit related health impacts at the Department of Veterans Affairs from five years after leaving the military to a minimum of 10 years and would not designate additional conditions as presumptive.

“Let’s get those bills to my desk so I can sign them immediately,” Biden said.

He also made strong comments favoring giving veterans the benefit of the doubt that their conditions were linked to environmental exposures.

“We’re following the science in every case, but we’re also not going to force veterans to suffer in limbo for decades,” Biden told the crowd of 150 people, including veterans. Biden said the Department of Veterans Affairs should presume conditions are linked to environmental exposures during military service, even if the science “is evenly divided.”

“When the evidence doesn’t give a decision one way or another, the decision we should favor is caring for our veterans while we continue to learn more. Not waiting,” Biden said, receiving the biggest applause of his speech.

The issue is personal for Biden, whose son Beau died in 2015 of a rare brain cancer. At the State of the Union last week, Biden talked about the role he thought burn pits might have played in his son’s death.

“We don’t know for sure if a burn pit was the cause of his brain cancer or the disease of so many of our troops,” he told the joint session of Congress. “But I’m committed to finding out everything we can.”

Veterans groups that have spent years advocating for more recognition of environmental exposures during military service say Biden’s advocacy is making a difference.

“I’m more optimistic than I have been at any time working on this issue,” said Tom Porter, executive vice president for government affairs at Iraq and Afghanistan Veterans of America, who as been lobbying Congress to pass the “PACT Act.”

Though Biden did not make any new commitments during his remarks yesterday, Porter noted the significance of the president saying that the federal government would err on the side of providing exposed veterans medical care and benefits, even if the science is not yet definitive.

“You’re just not going to find a 100 percent connection to burn pits because it’s not Agent Orange, it’s not just one chemical that people were exposed to,” he said. “The exposures were an infinite amount of chemicals, and there were different mixes of waste at different pits at different bases anywhere we went to war.”

Rosie Torres, who co-founded the group Burn Pits 360 after her husband was denied benefits for constrictive bronchiolitis he attributes to burn pit exposure, agreed that Biden’s speech comes at the right time to hopefully encourage Congress to act.

She appreciated Biden’s support of the “PACT Act,” in particular, because she said giving more conditions “presumptive” status also puts pressure on the Department of Veterans Affairs to develop special clinics and monitoring programs for the diseases.

“The fact that he doesn’t make this about him being president, but about the fact that he lost a son to the same issue that so many veterans are experiencing, it means a lot,” she said. “It begins a healing process for so many who feel like their loved one’s death was in vain. He is saying ‘I hear you, I feel you.’”