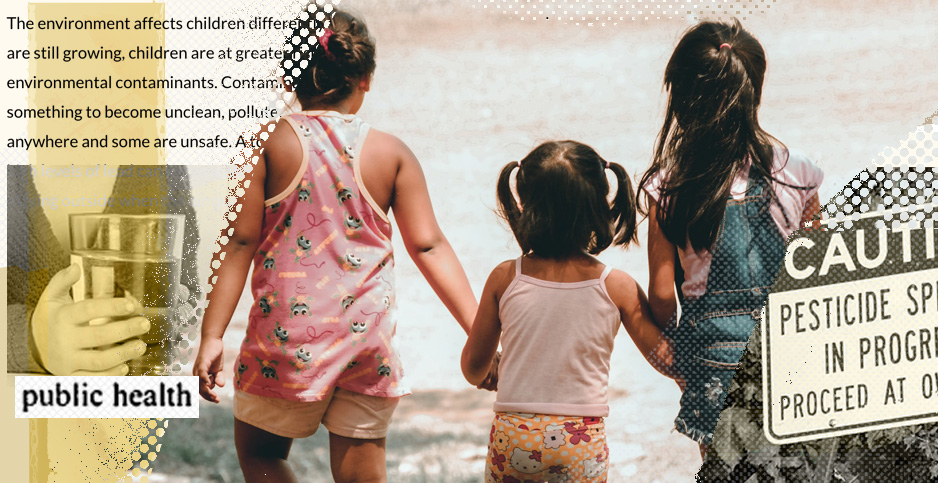 Time is of the essence when it comes to kids’ health. That was the message EPA Administrator Michael Regan had for members of an agency advisory panel this week.

"Until every child can safely drink water from the faucet; inhale a full, clean breath of fresh air; and play outdoors, without risk of environmental hazard or harm, our work continues," Regan told the Children’s Health Protection Advisory Committee on Monday.

"As a parent, I think about his future every day. I think about the kind of future he and all our children, throughout every community in America, deserve to have," he said. "So that’s what I mean when I say we have to move with urgency, because it’s our children’s health and safety that’s on the line — and every minute counts."

Regan’s comments marked a welcome change in tone to top experts in a field that was routinely ignored and underfunded by the Trump administration.

"It really boosted the morale of the committee," said CHPAC Chair Deanna Scher, who works at the Minnesota Department of Health. "Everyone was saying afterwards how much it meant that he showed up. They found the experience really encouraging."

The Trump administration caused a national firestorm over kids’ health in 2018 when it sidelined the head of EPA’s Office of Children’s Health Protection, Ruth Etzel (Greenwire, Oct. 19, 2018). Even before making headlines on the issue, the Trump administration routinely proposed slashing the office’s budget, and staffing there fell from 15.5 full-time-equivalent staff in 2014 to just 13 by the end of the administration. The administration also pulled funding in 2019 from a network of 13 research centers focused on environmental dangers to kids (Greenwire, May 20, 2019).

Through it all, members of CHPAC say, they were also sidelined by the administration. While EPA did not try to stack CHPAC with industry representatives, as it did with some of its other science advisory panels, the agency rarely asked CHPAC to weigh in on issues it was dealing with.

"We are the only EPA advisory committee focused solely on children," then-Chair Barbara Morrissey wrote in a letter. "Typically, we receive 2-4 charges per year from a range of EPA offices and programs. We have received only one charge from this administration."

Now committee members say they are just hoping the Biden administration can undo some of the damage done.

"There was a community of children’s environmental health that was very broad, spread all over the United States, and it was just kind of disintegrated during the previous administration," said Linda McCauley, dean of the School of Nursing at Emory University, who used to run a research center dedicated to maternal health and now sits on the EPA advisory committee. "It will be very interesting to see what this field looks like in two years."

EPA officials are certainly trying to show their support.

While Trump EPA administrators never met with Etzel in the two years before she was placed on leave, Briskin says she already met with Regan in April and found him to be "very supportive of children’s environmental health." He "has a particular interest in lead and asthma," she said.

She also touted the fact that EPA included her office in its formation of an internal "equity team" to promote racial and environmental justice — an issue of great importance to President Biden himself — both inside and outside the agency.

"I am very excited that we are at the table with the political team to make sure children’s health will be covered," she said.

Experts say there is reason to hope the Biden EPA will pay more than just lip service to kids. Scher pointed to the creation of an EPA Council on PFAS, which will reexamine agency inaction on per- and polyfluoroalkyl substances, as one substantive change the administration is already moving forward with, and McCauley similarly said she was glad to hear of the Biden administration’s overall commitment to replacing lead pipes as part of its infrastructure push.

But, many agree, there is still more that must be done to protect kids.

In August 2020, the agency put out a grant to fund just one children’s environmental health research center. Mark Miller, co-director of the Western States Pediatric Environmental Health Specialty Unit and a member of CHPAC, said EPA should reinstitute the program and fund the full 13 projects it previously did.

"That would be a strong indication about their seriousness about addressing children’s health," he said.

In an email, Etzel told E&E News she worries that the Biden administration isn’t acting fast enough, particularly when it comes to lead.

"I have heard talk but seen no action," she said.

In particular, she said, EPA should prioritize removing lead from the few types of aviation fuels that are still allowed to contain the neurotoxin. The Obama administration had been working on such a standard, but the Trump administration never followed through on it.

"The past administration’s inaction had serious consequences for children’s health and development," wrote Etzel, who, though she now works in the EPA Office of Water, said she only spoke for herself and not the agency. "Children only get one chance to develop properly. Think of the millions of children who now have irreversible neurodevelopmental problems because the government didn’t take action. The clock is ticking."

Tom Neltner, director of the Environmental Defense Fund’s chemicals program and a former committee member, agreed the Biden administration’s commitments could be tested when it comes to actually writing regulations on chemicals that affect kids.

EPA, he said, will have a chance to prove itself when it comes to writing regulations for PFAS in drinking water and rewriting Trump-era standards on lead in drinking water, both of which have the potential to keep kids safe from chemicals that harm their development but risk angering local utilities and the chemicals industry.

"It’s always easy to be supportive of kids, but it’s really about translating that into action," Neltner said. "I have no doubt that they are committed to it, but there are tough decisions ahead."