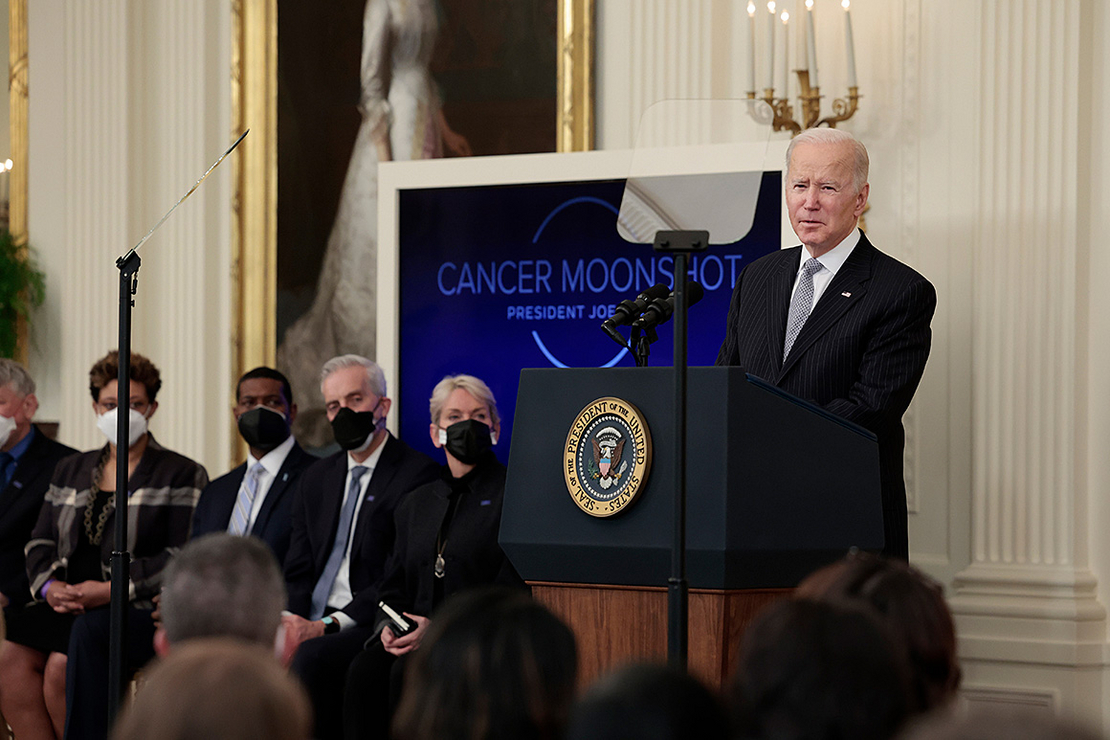 President Joe Biden today will sign an executive order to bolster the bioengineering industry, creating an initiative that will support both his Cancer Moonshot initiative to reduce mortality and the administration’s goal to tackle climate change.

Biden believes that boosting biotechnology and bioengineering can aid in his efforts to “end cancer as we know it” as well as address global warming, according to two senior White House officials.

“The power of biotechnology extends far beyond health care,” one official, who was not authorized to speak publicly as a matter of practice, said on a call with reporters Sunday evening. “It will enable us to reinvent America’s supply chains, transitioning away from chemicals that rely on oil towards cleaner, safer and more reliable alternatives that we make right here at home.”

The executive order to launch a National Biotechnology and Biomanufacturing Initiative is aimed at ensuring the industries remain in America as they develop cutting-edge technologies to address cancer. It also intends to create stronger supply chains and more American jobs. Biden will announce the new initiative this afternoon at Boston’s John F. Kennedy Presidential Library in an event that also marks the 60th anniversary of former President John F. Kennedy’s original moonshot speech.

Biden’s Cancer Moonshot took inspiration from Kennedy’s original moonshot effort. In September 1962, Kennedy famously told the American people, “We choose to go to the moon” during a Houston address where he galvanized support to send astronauts to the moon.

The White House will also host a summit on the initiative tomorrow during which Cabinet agencies are expected to announce a wide range of new investments to aid the industries, including increasing mandatory bio-based purchasing by federal agencies and expanding the existing BioPreferred program to ramp up the use of renewable agricultural materials.

Biden first announced his intent to “end cancer as we know it” at his inaugural State of the Union address, saying, “It’s within our power to do it” (Greenwire, May 4, 2021). The Cancer Moonshot officially launched in February 2022, with the creation of the “Cancer Cabinet,” which includes EPA Administrator Michael Regan (Greenwire, Feb. 3).

From its inception, the effort has acknowledged that its goal of reducing cancer death rates by 50 percent in the next 25 years must include multiple initiatives to prevent cancer, including by reducing environmental exposures. In July, the Cabinet announced five priorities for reducing cancer deaths, including understanding and addressing environmental exposure to carcinogens, and the Department of Defense’s Murtha Cancer Center Research Program has also launched a new initiative to better understand how soldiers’ exposures to toxic chemicals during their service affects development of cancer.

Though biotechnology is often thought of as an industry that mainly serves health care and pharmaceutical purposes, the White House is stressing that it can help achieve other administration goals beyond increasing cancer survival rates.

A White House fact sheet on the executive order notes that biotechnology can program microbes to produce specialty chemicals and compounds in a process called biomanufacturing.

“These advances have led industry to embrace biomanufacturing — as an alternative to petrochemical-based production — to make things like plastics, fuels, materials and medicines,” the fact sheet says, noting that industry analysts suggest that before the end of the decade bioengineering could account for almost $30 trillion, or more than a third, of global output of manufacturing industries.

The second White House official said the order aims to ensure that the United States remains at the forefront of biotechnology innovation and does not risk “falling behind, as we did in the semiconductor sector and then the advanced telecommunications sector.”