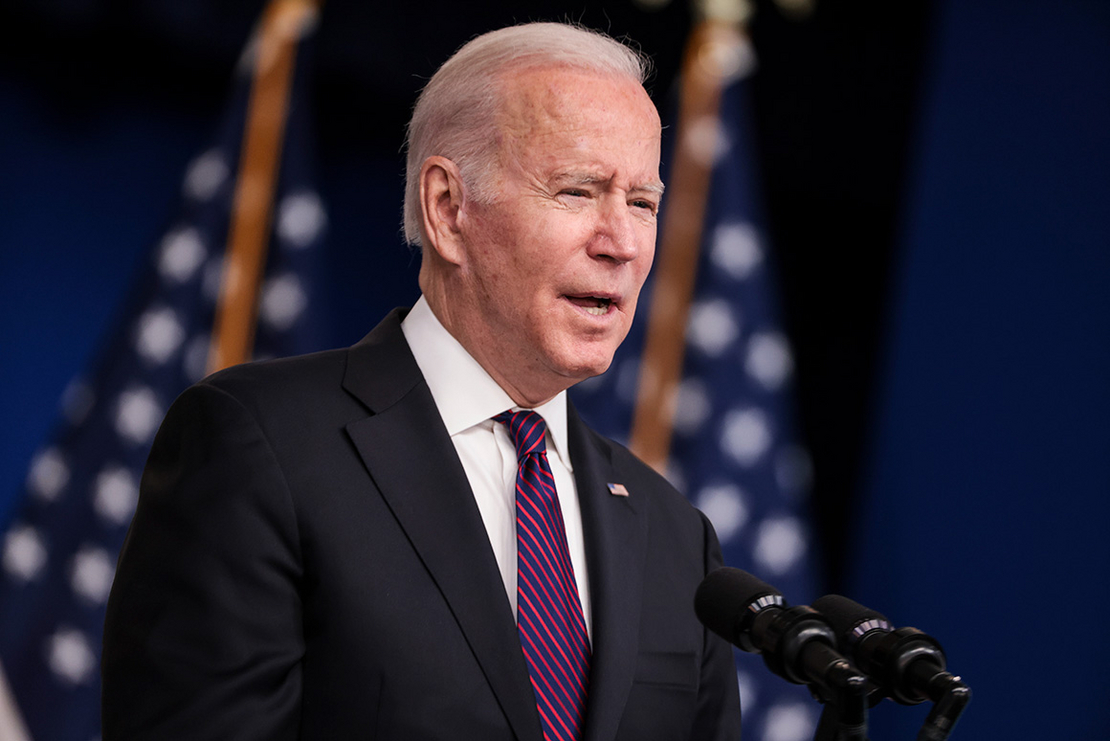 President Biden speaking at a Tribal Nations Summit in the South Court Auditorium of the Eisenhower Executive Office Building, next to the White House, in Washington on Nov. 15. Oliver Contreras/SIPA USA/Sipa via AP Images

New initiatives from the Biden administration to expand the influence of Indigenous tribes could bolster legal opposition to energy projects on public lands.

"We’re going to make some substantial changes in Indian Country," Biden said during the virtual event.

The same day, the government released a memorandum of understanding signed by 17 federal agencies agreeing to increase consultation and collaboration, in recognition of existing treaty obligations between the United States and tribal nations.

The announcements drew praise from Indian and environmental law experts, who saw the change as an important step for the Biden administration in improving relations between sovereign tribes and the United States.

The agreement, signed by agencies such as EPA and the Interior and Agriculture departments, is not legally binding, so it cannot by itself serve as the basis of a legal challenge to federal approval of energy projects on treaty lands.

But the agreement could help tribes hold the federal government legally accountable to its commitments to treat tribes as an equal partner in energy development on public lands.

The Biden administration’s pronouncements "may be relevant if there is litigation down the road, even if the tribe wouldn’t be able to just say, ‘You violated this [memorandum of understanding], and therefore, we’re suing you, and we win,’" said Monte Mills, co-director of the Margery Hunter Brown Indian Law Clinic at the University of Montana.

One way the agreement could bolster legal arguments is by allowing tribes to point to agency decisions that aren’t in accordance with the Biden administration’s consultation policies. Those arguments could be made in the context of lawsuits alleging violations of federal laws like the National Environmental Policy Act or the Administrative Procedure Act.

A greater recognition of treaty rights and tribal nations’ role in managing public lands could be significant for projects moving forward, but the end result won’t necessarily be greater opposition to fossil fuel development across the board, some legal experts said.

"My sense, relative to fossil fuels, is that it won’t prove simple," said Erik Schlenker-Goodrich, executive director of the Western Environmental Law Center.

There are 574 federally recognized tribes across the United States, with different traditions, perspectives and economic conditions. There are also conflicts within tribes, between people and their governments, including whether there should be more fossil fuel development on federal lands, he wrote in an email.

"This complexity is very palpable in Greater Chaco, where there are not only public lands, but allotment lands that provide revenue to Diné people," said Schlenker-Goodrich. For example, he added, there are "differences of perspective" over the size of the buffer around the Chaco Culture National Historical Park.

He referred to the Biden administration’s recent announcement that it would pause leasing around the New Mexico park as the government works with tribal communities on management of oil and gas on land that is sacred to several tribes.

Members of the Navajo Nation Council came out publicly against the administration’s proposal to remove lands around the park from oil and gas development for two decades (E&E News PM, Nov. 16).

The Western Energy Alliance, an oil and gas industry group, was also quick to condemn the Biden administration’s proposal to establish a 10-mile buffer, saying the move would deprive Navajo mineral owners living directly around the park of more than $90 million in royalties. The Navajo Nation has proposed an alternative 5-mile buffer that would be less disruptive to energy development.

"Navajo mineral owners have long complained that the planned buffer threatens their livelihoods and that their voices are ignored by the Interior Department," wrote WEA President Kathleen Sgamma in an email.

She noted that improving agencies’ long-standing obligations to conduct tribal consultation is welcome, but she called the administration’s plans a "means to achieve political ends."

Sgamma wrote: "Certainly, because Chaco has cultural significance to Puebloan tribes located even hundreds of miles away, including [Interior] Secretary [Deb] Haaland’s, those tribes’ voices should be considered, but not to the detriment of the Navajo Nation whose lands are directly impacted."

The Biden team’s move for greater collaboration with tribes isn’t a new concept, but the effort to establish common standards across agencies is a change from previous administrations, experts said.

"To have a president acknowledge and pay homage to the idea that there are different forms of information and worldviews that are helpful, it’s exciting to see it in a public way," said Karen Bradshaw, an environmental law professor at Arizona State University.

The White House Office of Science and Technology Policy and the White House Council on Environmental Quality released a memorandum this month that committed to incorporating "Indigenous Traditional Ecological Knowledge" into scientific and policy processes across the federal government.

The White House defined Indigenous knowledge as "a body of observations, oral and written knowledge, practices, and beliefs … applied to phenomena across biological, physical, cultural and spiritual systems."

"This effort will give Federal agencies the tools they need to ensure Indigenous knowledge is appropriately considered and elevated," Lander continued.

The real test will be how the government puts its objectives into practice, said Bradshaw, noting that tribal consultation can resemble green-washing, or marketing tactics that make products seem more environmentally friendly than they actually are. In other cases, green groups have co-opted Indigenous concerns for environmental means.

"There can rightfully be some skepticism about what this looks like when it’s actually done in practice," Bradshaw said.

"Is it going forward in a way that is consistent with Indigenous interests? Or is it lip service that essentially leads to the same place?" she said. "I think it’s a real question."

Mills of the University of Montana also noted the need for education and outreach at federal agencies that have less experience with tribal consultations. The federal memorandum provides a basis for that kind of training, he said.

"It’s really just making sure that this new direction is thoughtfully and comprehensively implemented so that folks on the ground know what it means to be carrying out this policy," he said.

It’s not clear whether the Biden administration’s newly emphasized policy objectives would shift the federal government’s position on existing and proposed projects that have already been challenged by tribes.

During this month’s summit, the president touted actions he had taken to block fossil fuel infrastructure, such as his decision to revoke a key permit for the Keystone XL pipeline. The oil conduit had been challenged in court by the Rosebud Sioux Tribe and the Indigenous Environmental Network, among others.

At the same time, the administration has either continued to support — or at least not taken a public position on — the fate of other fossil fuel projects strongly opposed by tribes.

For example, Biden has not expressed opposition to Enbridge Inc.’s Line 3 or Line 5 oil pipelines, respectively located in Minnesota and Michigan. A state permit for the Line 3 replacement project is currently subject to a novel legal challenge by the White Earth Band of Ojibwe that pairs tribal treaty rights with a "rights of nature" claim (Energywire, Nov. 18) .

The administration has also allowed the Dakota Access pipeline to keep operating without a permit to cross beneath the human-made Lake Oahe in the Dakotas. The U.S. Court of Appeals for the District of Columbia Circuit upheld a lower court ruling that axed the Army Corps of Engineers permit after finding the agency had violated NEPA.

The Army Corps is currently in the process of completing a more robust environmental review for the project in consultation with tribes including the Standing Rock Sioux Tribe.

Mari Margil, executive director of the Center for Democratic and Environmental Rights, called the Biden administration’s memorandum on consultation an "important step."

"However, we believe more needs to be done to provide tribal nations the ability to protect their treaty lands, their rights to hunt/fish/gather on these lands, including the authority to protect the rights of nature, on those lands," she wrote in an email.

There are also holes in the administration’s plan, she said. For example, she said, the memorandum of understanding doesn’t cover the federally recognized tribes that did not sign one of the 370 ratified treaties with the United States.

Schlenker-Goodrich of the Western Environmental Law Center said that increased consultation would complicate federal decisionmaking but would ultimately result in stronger agency actions.

"It’ll accentuate complexity," he continued, but the approach "also creates a path forward to better public lands management; respect for the first peoples of this continent; and a thriving, resilient future for all of us."